The secret to converting zodiacal longitude into price levels is always based upon the minimum fluctuation of the security, commodity, currency, etc. Many of today’s software programs use techniques that convert the current planetary longitudes into price levels. For example if the planet Saturn is a 23 21 Taurus, the straight longitude conversion is $53.35 because Taurus starts at 30° of the zodiacal circle. W.D. Gann illustrates this technique in the Coffee Letter.

END_OF_DOCUMENT_TOKEN_TO_BE_REPLACED

1997 was a fairly easy year to forecast. We were already in a Bull Market and it was a pretty safe bet that we would repeat primarily like the Bull markets of 1987 and 1937. The fact that the market recovered so well after the Asian currency panic is another indication that the bull market will continue in 1998. Gann’s basic rules for ascertaining the type of year the stock market will have on page F-6 of his “‘Forecasting” course say’s that years ending in 8 are typically bull market years. This is another supporting factor for a bullish 1998 forecast. Gann also says in this same course, rule #1 – “A bull campaign generally runs 5 years – 2 years up, 1 year down, and 2 years up, completing a 5-year cycle”.

END_OF_DOCUMENT_TOKEN_TO_BE_REPLACED

Beginning investors are continually told to “trade with the trend” or “the trend is your friend.” That’s because once a securiry enters an established trend it tends to persist in that direction as more investors realize it is moving a certain way and get on board. George Soros (a great investor) has observed another reason that price trends persist which he calls “reflexivity.” His intriguing point is that a company’s increasing stock prices are helpful to the company in a number of ways and so the company becomes more successful, making the stock price go up farther. Soros calls this a positive feedback loop. Interesting idea, isn’t it? Makes you want to spot the trend as early as possible. Exactly how you can you do this is the subject of this book.

END_OF_DOCUMENT_TOKEN_TO_BE_REPLACED

Stop orders, or as everyone refers to them, stops, are the instructions given to the broker or the market or the computer to buy or sell a security depending on speciﬁc criteria. For example, “Sell my 100 shares of IBM if the market price declines to 99.” Or, “Buy 100 shares of IBM if the price rises to 101.” Stops may be used as indicated for buying and selling. Here in this discussion we are concerned only with the use of stops for protective purposes, that is, to stop a loss from running, or to protect an accumulated proﬁt.

END_OF_DOCUMENT_TOKEN_TO_BE_REPLACED

If you trade stocks long enough, you will probably run across this puppy: the dead-cat bounce. (I could not resist the pun). It acts as a warning to exit the stock quickly after a dramatic decline. 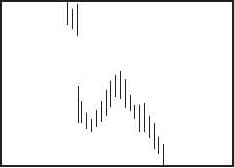 The dead-cat bounce pattern (DCB) consists of three phases. First, the event sees prices decline over 30% in just a few sessions, the majority of the decline happening the first day. Second, prices bounce, recovering a portion of what they lost; and third, prices ease down, giving back all of their gains and more in the postbounce decline.

END_OF_DOCUMENT_TOKEN_TO_BE_REPLACED

Profitable situations can provide us with as much pain and anguish as the unprofitable if we work it right. If they are tied to our self-esteem—if we are trading ourselves instead of wheat or GM—a paper profit presents us with a real problem: to take it, book it, feel good, and perhaps see it soar to extremes, leaving us kicking our-selves for exiting too early, or perhaps to see the profit erode away and not be takeable at all. Ego involvement and a lack of a mature methodology can only result in pain and regret for the unequipped and uneducated trader. One thing is certain: If perfection is your standard or goal, art (or machine tools or theoretical mathematics) is the field for you. Not Wall Street. END_OF_DOCUMENT_TOKEN_TO_BE_REPLACED

Let’s begin with a survey of many common trend-following build-ing blocks, including the ones we were taught in the Turtle pro-gram. These are ways to determine when a trend may be starting and when it may have ended. This is not a complete survey: You can ﬁnd entire books that do nothing more than outline different indicators and system rules that can be used to build trend-follow-ing systems. For other types of trading there are other types of build-ing blocks that may be useful.

END_OF_DOCUMENT_TOKEN_TO_BE_REPLACED

Our next indicator is fairly well-known in one version or another. It’s been called, among other things, cups and caps because of the visual image it suggests. The cup side is the buy projection, the cap is the sell. Both involve three bar formations—take your pick, daily, ﬁve-minute, whatever. The second bar has the extreme (lowest, highest) price. Sometimes the price in question is the low (or high for caps) and some-times it’s the close.

In this version of cups, both the lowest low and the lowest close have to occur in the middle bar. Also, the lowest bar must be lower than the three lows immediately preceding it. This is a rather arbitrary rule in-tended to limit the number of times the formation is occurring mid-range. Ideally, the cup should be a bottoming indicator, so think of the three-bar qualiﬁer as a kind of running start setup.