In December 14, 1920, Gann issued his 1921 Annual Forecasts for the stock market. He thought the market would not have the wide ﬂuctuations that had occurred in the past two years. Under his “Important Points of the Year,” he wrote the following advice: ‘The low point for the general market will be reached between the ﬁfth and the tenth of February, although some stocks will make low around the 12 to 14. The spring campaign will start in February and will culminate between April 28 and May 3. You should certainly sell out long stocks on this advance, as the month of May indicates serious declines.

“The markets will not be very active during June and July, having small advances and becoming dull and remaining in a narrow range.

“August is a bearish month and quite a decline will take place. In fact, one bottom should be made in August. Then should follow an advance to the early days of September; decline to September 25; then advance into the early part of October. with the low point around the 15 and 16.

Gann’s prediction for the spring bull campaign started early in the year and it topped out exactly where he said it would. The exact high occurred at 80.03 on May 5 (see ﬁgure 1). The market went into a bearish trend until June 20, where it bottomed at 64.90. The market stayed dull during the summer and made a minor high at 69.95 on August second. His bearish forecast for August was correct and his prediction for a bottom on the yearly chart occurred on August 24 at 63.90. 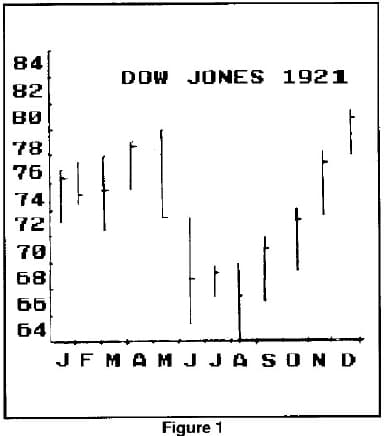 After the August lows, Gann correctly thought that the general trend would be up for the remainder of the year. From the early September highs, he said the market would work lower until the 25th of the month. The highs were at 71.92 on September tenth and the market dropped to 69.43 on September 20.

In the month of October, the highs were made in the ﬁrst few days of the month and prices dropped to 69.46 on October 17, making this the low point for October. Gann’s low was for October 15 and 16. The market rallied strongly the last two months of the year, just as he said it would.

In my opinion, his forecast accurately represented the picture of the general trend for 1921. He identiﬁed the most bearish months as May and August. He got his subscribers out at the top at the end of April and correctly got them long after the August bottom. Keep in mind that these predictions are based on only one variable, time. To be successful, he insisted on also utilizing price and volume. His point was that there are changes in the forecast that must be made sometimes based on what actual prices do. Cycles of time unequivocally determine the majority of price movements. Gann’s Annual Forecasts prove that is what causes the highs and lows. However, there are times when the cycles will not work out the way they should according to the time element. When we see this happening, we must use stops to limit our losses.

One of the techniques Gann devised for determining the trend was the idea of time and space movements. He kept track of the greatest number of points the market declined on, reactions and the longest length of time it spent reacting before resuming the trend.

As an example of this technique, let’s say that the NYFE during uptrends does not react more than two days down and not more than 2.8 points for the space movement. The ﬁrst time that the NYFE had a greater reaction, say six days down and 4.5 points in price, Gann would have considered that an indicator of potential weakness that could be forthcoming.

I have found that the best way for me to use this method is to watch closely the next rally after the ﬁrst larger drop in prices and longer reaction in time. If the rally afterwards stalls after making nominal new highs, then you can consider that the trend is about to make an even greater price drop than the previous one. An example of this would be the reaction in stocks down in mid-June (being a greater time and space movement than previous reactions) followed by a nominal new high which stalled and then dropped an even greater distance afterwards.

In addition, take a look at the ﬁrst reaction in August 1986 and 1987 and the subsequent rally to nominal new highs before prices collapsed. Make sure you give the market a few days to deﬁnitely show it is stalling after making slightly new highs. You would not have shorted the market after the early May 1989 decline because of the dynamic ﬁrst day rally off the low with gaps and not stalling at all after it made new highs on the ﬁrst day of the rally. The ﬁnal rally is caused by the latecomers who have been waiting for the ﬁrst decent correction to get on board. But these are the weak holders and they cannot hold the market up for very long unless it is an abnormally strong move.

As of today’s date of July 10, my projections of highs and lows are as follows: The averages should continue to move up and make a top on July 17. From there, a reaction down until late July where an uptrend should occur in the month of August until the 18. The market should react down until the 24th or so before resuming upward until the ﬁrst week of September. If the July 17 works out to be the top, run a 2 x I angle up from this high and expect the prices in August to touch this angle on the Dow. That should be the spot to cover ones long position. The picture of what this could look like is provided in ﬁgure 2. The important aspect though is not whether the price behavior moves up or down with the magnitudes shown in ﬁgure 2, but rather that the highs and lows come out as projected. If the latter occurs, then the proﬁts will come. 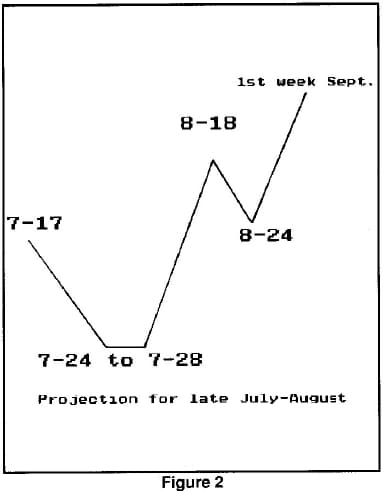 How the Previous Forecast Came Out

The curve projection for May began correctly with a distribution top occurring between April 25 and May 5. During this 12 day trading period, the down volume exceeded 60 million shares a day, ten out of the 12 sessions. Prices dropped 76 Dow points or 3.1 percent instead of the ﬁve percent I was anticipating. The trend of the market abruptly changed on April 12 and in one day took out the April 27 high.

The prediction for a weak May was incorrect after May 12 and my short position was stopped out on the open. My date of the 19 which was not indicated as a high or a low became a high (the high was one trading day later and .92 points higher on a close) and the cycles got back in sync by dropping into the end of the month as projected. Stocks and bonds were to have made lows on May 31 and the actual lows were May 30 and 31 respectively. After the 31, bonds made a massive rally but stocks did not rise as strongly as I would have expected.

In stocks, my high for June 9 came out correct, but the date for the low was missed. The uptrend for June was to have lasted until the 22, the ﬁnal highs for the month. The highs were June 23 on a closing basis and remained there for two more trading days before collapsing on the LEI report. The pattern of prices was very tricky in this time period. The lows in futures were on the 16 (1 thought it would be the 13 originally) but the Dow Jones made lower lows until the 21. For my highs to come out as the cycles indicated, prices would be required to make a sharp increase quickly.

This occurred, but only at the last moment. Usually, prices will trend nicely into a date of a high or low. I only point this out to show an example of how the market can trick you with its price patterns. Keep in mind the following quote of Jeffrey H. Horovitz, executive director of the Foundation for the Study of Cycles, when making your projections based on cycles, “Market projection is part science and part art. Cyclical analysis offers the science and the individual analyst’s interpretation is the art.”