Gann and the Planets By Gregory Legrand Meadors

W.D. Gann used many esoteric techniques to predict future market direction and price targets with amazing accuracy. In the present context, the word “esoteric” means, “understood by only a chosen few” (Webster). These methods were never revealed  in any systematic way, and many of the principles which Gann used in his forecasting system are awaiting your discovery. Some of these principles can be found in some of Gann’s ﬁctional writings, which on the surface do not appear to have much to do with the market.

Such a book is Tunnel Thru The Air, in which Gann reveals some of the methods which he employed for his success. The esotericism of Gann’s forecasting is well known, but lesser known is the ancient body of esoteric sciences upon which Gann drew. Such sciences include numerology (the universal language of numbers), astronomical cycles, astrological interpretations, time cycles, Biblical symbology, and sacred geometry. These sciences contain the keys to accurate market timing. For example, in this book Gann advises reading the Bible three times to learn about cycles and how the Creator reveals nature’s universal laws. Obviously, such a study requires years to master and cannot be picked up by the dabbler.

To get some background on the inﬂuence of cosmic inﬂuences, you can read Cosmic Patterns by J. H. Nelson. Nelson was an RCA scientist who discovered a direct correlation between the angular relationship of the planets and Sun Spots which affected short wave radio transmissions. His discovery gave him the knowledge to forecast future radio disturbances and also proved the physical effect of unseen cosmic influences based upon the angles (aspects) of the planets (Luke 21:25). The widely advertised Harmonic Convergence last August involved several planets in conjunction (same longitude) in the constellation Leo (ﬁre sign which governs the ﬁfth house of speculation in the horoscope). This powerful congregation of planetary inﬂuences also formed positive grand trine aspects (120 degree angles) with the outer planets, which culminated at the August 24 New Moon which was the top of the market.

The planets Jupiter and Saturn are cosmic opposites in astrological interpretation. Saturn governs time and depression, while Jupiter governs expansion. On August 19, Jupiter turned retrograde motion ( a condition where the planets appear to be moving backwards as viewed from earth). This condition which decreases Jupiter’s positive inﬂuence lasted until December. At the same time, Saturn turned direct motion (which increased its negative inﬂuence). Students of price activity should note that in the last 20 years there have been no major market advances during the three and one-half month Jupiter retrograde cycle.

On September 22 a Solar Eclipse occurred in the Earth sign Virgo a portent of future market direction when activated. On October sixth, Mars (action) passed over this Solar Eclipse Degree (29 Virgo) activating this negative Earth sign Eclipse. It was here that the market started its record breaking 13 day drop. This was a textbook astrological event (read Encyclopedia of Astrology of by Devore, 1947, on Mars passing over an Eclipse Degree). Is it any wonder that the market came down to Earth? Mars then formed the negative Square (90 degree) aspect with Neptune (confusion, illusion) and was exact on October 16.

At the same time that the Solar Eclipse was activated by Mars, a Lunar Eclipse occurred in the 13th degree of Libra (scales, balance). In addition, Venus (NYSE ruler) entered the Bear sign Scorpio (opposite Tarus the Bull) and formed a powerful conjunction (0 degrees) with the destructive planet Pluto (Plutonium). The bomb was dropped when this conjunction was exact on October 19 resulting in a 508 point one-day crash. 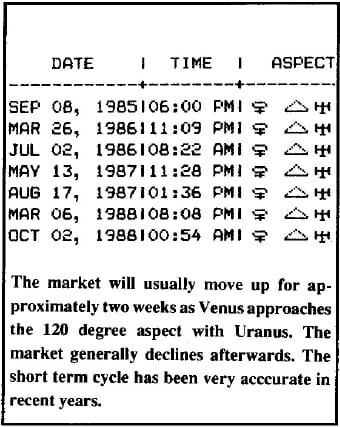 Mercury (trading) was also conjunct to Pluto at 3 degrees Scorpio during the Lunar Eclipse. Around October 13, Mercury turned retrograde on the 13th degree in Scorpio, which presides over the eighth house of the Horoscope which governs other people’s money, death, and destruction. For the advanced student, note the positions of the Lunar Eclipse and planets with the Lunar mansions (John 14:2).

One astrological technique of forecasting which Gann used involves comparing the current planetary positions (transits) to the NYSE birth chart, and the use of progressions of the planets based on one year for a day (Ezekiel 4:7). According to McWitter’s method in her book Astrology & Stock-market Forecasting (1932), the aspects to the planet passing over the Midhaven (top of the NYSE birthchart) are major indicators of market direction. Using this technique, one could have seen that Jupiter was in the Midhaven when the Sun started to form an opposition of October sixth and was exact (180) on October 19.

The number 13 is a powerful number in ancient symbology. The Dow high was 2722 (2+7+2+2= 13) which was 13 years from the October 1974 low. This number vibration (with the planets) clearly indicated the future market direction. They gave advance warning of the tidal wave of selling pressure last October. Many market letter writers and “advisors’ claim that they forecast the August top and October crash, but before you buy market advice, ask to see the trade conﬁrmations.

See also  The Gann Side of Fibonacci Numbers By Granville Cooley 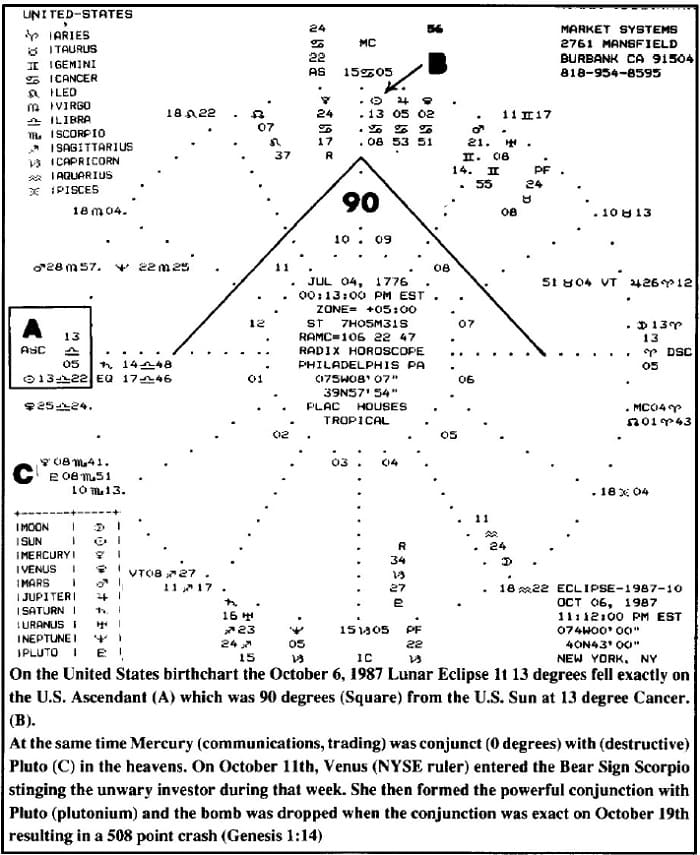 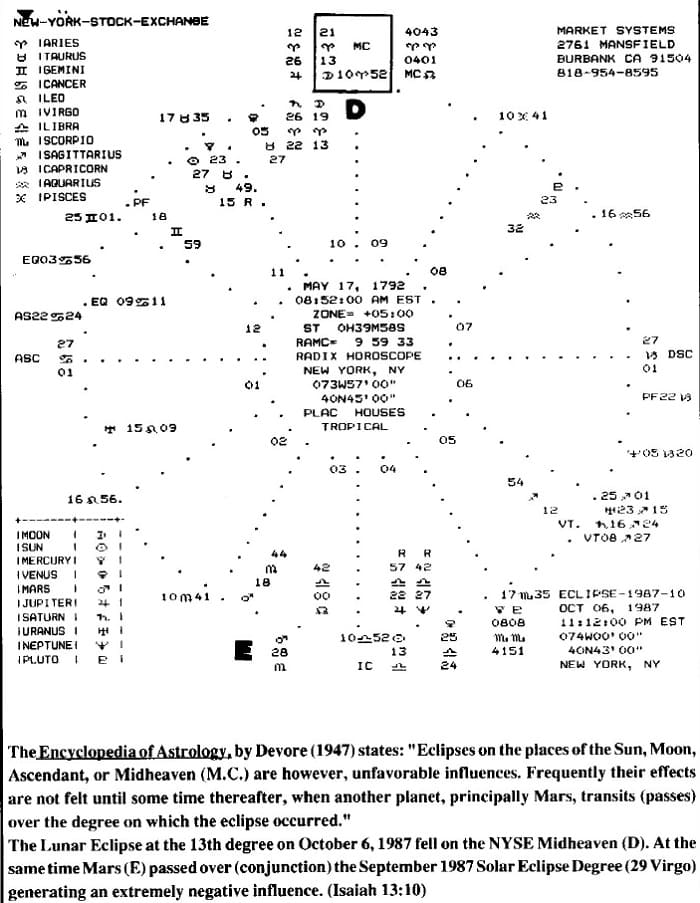 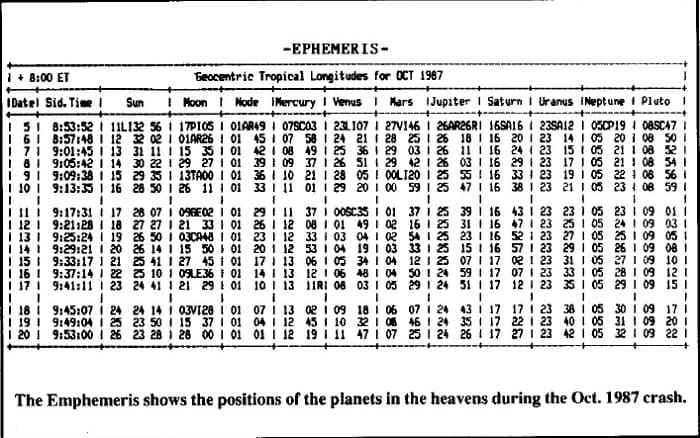 The dates given in the “Cosmic Conversation” article (Feb. issue) were the exact trine aspects (120 degree) between Venus and the Big Wheel (change) Uranus (Ezekiel 1:16). Historically the market tends to move up prior to the completion of the Venus trine Uranus aspect, after which the market usually declines (unless more powerful vibrations are evident). This twice-per- year cycle recently occurred on the following dates: March 26, 1986; July 2, 1986; May 13, 1987; August 17, 1987; and March 6, 1988. Observe the market pattern two weeks before and after these dates. The drop into the November 11 time frame was based upon the Mars/Jupiter conjunction (0 degrees) and opposition (180 degrees) cycles which has timed many market lows and trend change dates. You can see it very clearly in August 1982.

Gann also mentioned the number 266 as a key in Tunnel Thru The Air and that the Biblical story of Jonah is the key to interpretation of the future. Could the number 266 represent 72 hours (2x6x6) which equals the three days and three nights in the story of Jonah or could it be the star (angle) of the Magi (Matthew 2:1)? There are other keys to this short story. Read it!

The Galactic Center which is located at 266 degrees of longitude (26 degrees, Sagittarius). Examine any geo-centric ephemeris and note that when the market crashed on October 24, 1929 (Black Thursday), the planet Saturn was at the Galactic Center (26 degrees 22 minutes Sagittarius). Saturn’s inﬂuence of timing and depression has a 29 year cycle. Would it not make sense to expect a sharp drop (third largest) to occur when Saturn reached the same location in the heavens? Would it not also be of signiﬁcance if this date were a two year anniversary after the previous record drop on January 8, 1986. This planetary cycle from a previous crash date was missed by astrologers and market “advisors” who do not understand the cycles of previous market history. Did you know that the market also crashed on October 19(1937) completing a 50 year time cycle?!

Many people laugh at some of these techniques, but they also lose their money in the market. When you have ﬁnished your lessons and have discovered the keys, you will then have knowledge. You will then be able to accurately interpret the “signs of the times” (Matthew 16:2-3) and the market with “uncanny” accuracy. Understanding how Gann used the universal language of numbers, Biblical cycles, and sacred geometry are techniques that may be discussed in later articles.

Newer Will History Repeat? By Donald R. Vodoptch
Back to list
Older Compuwave By Robert A. Saperstein and Thomas Gautschi

6 thoughts on “Gann and the Planets By Gregory Legrand Meadors”