In order to pin point the manifestation of events upon the physical earth plane, you must ﬁrst have a working knowledge of the astronomical mathematical formula. The 360 degree cycle popularized by W. D. Gann is our reference point. What did the wizard of Wall Street teach us about the great 360 degree cycle? The mathematical architect Gann generously left us a legacy of cosmic information to formulate into working principles to predict in advance short, intermediate, and long-term ﬁnancial market trends.

In my long cerebral journeys into the very core of the secrets of the universe, time and time again nature has unveiled its self tome by proving that its greatest secrets are revealed in an essence of simplicity.

Mr. Gann articulated that the jewel of the 360 degree cycle in predicting stock market trends was literally calendar time. Let’s make sure I heard myself correctly here. I said that to beat mighty Wall Street all I needed as working tools was a calendar and maybe a calculator. What a powerful tool this concept is. Let’s now construct a foundation and manifest working principles for this earth shattering news.

To become the captain of our destiny in proﬁtable stock transactions we need to follow certain guidelines and rules. First we must transpose calendar time onto the 360 degree circle. To devise our formula we must gaze upon the heavens and monitor the cosmic clock that regulates the motion of mother earth. The earth completes one revolution around the sun in 365.24 days.

To reconcile our revelation of calendar time being the domain for predicting market trends, we simply recognize the fact that the earth itself is at the mercy of the gravitational pull of the sun, therefore dictating its annual cycle of 365.24 days. As the Earth and its consciousness is the subordinate of the sun, so man and the manifestation of all events on earth are in harmony with this same cosmic music of 365.24. Can you believe the simplicity of natures most guarded secrets? 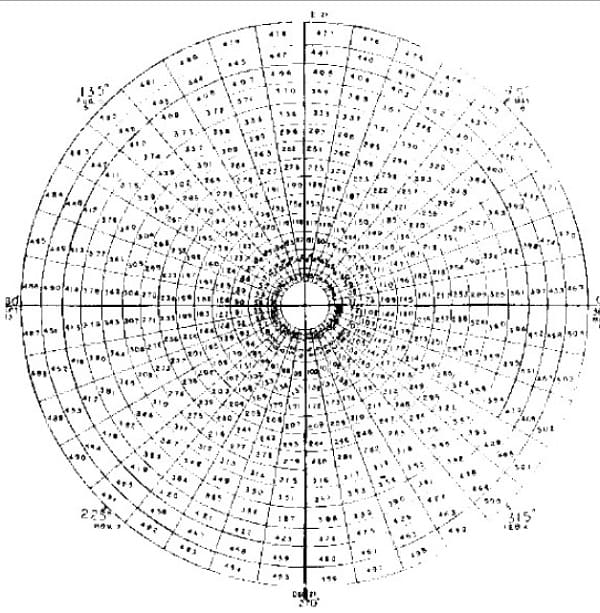 Mr. Gann taught us that the beginning of each renewed annual Earth cycle commenced at the spring equinox. Gann indicated that by counting days from March 21 that many of nature’s invisible secrets would be revealed. Gann went on to say that by no means was the stock market devoid or divorced from this natural calendar rhythm. Just as the Earth has seasons of the year; a time to plant, a time to cultivate, a time to grow, a time to pluck, and a time to reap, so does Wall Street ebb and ﬂow with this same circadian time piece.

My dear friend, please take time now to grasp this essence of universal law. Understand and cherish it as your eleventh commandment. By programming it into your belief system and consciously recognizing its manifestations in the drama of your own life’s enfoldment, you will then posses in your heart a glimpse of the truth of all things. You will understand that life deals out no random events. You will cherish the fact that you indeed are the navigator of your life’s destiny. You will discover the more you scratch at truth, the more it will itch.

As I mentioned earlier, Gann taught us that one avenue of endeavor using the cycle 365.24 was to mark time from March 21. 1-Ic said to start by making March 21 our zero point. Thus making March 22 day one. Gann divided the year into six teen equal parts. By dividing the year by four, our sum is the beginning of each new season of the year.

The philosophy Gann was spot-lighting onto our tunnel vision was that March 21 was the commencement of the annual reincarnation of life’s new birth. By June 21 at the summer solstice point. Intense new growth had taken place in the animal, vegetable, plant, and insect kingdom. By the fall equinox on September 21 the peak of vitality was ebbing ever so slowly, and old age was replacing fruitarian as the dominant cycle. By the winter solstice, frozen and suspended animation ruled the northern hemisphere of the earth, and the suspended seeds of the perpetuation of life were invisible, as all life was hidden in the frozen tundra, meditating patiently for the return of the photons of light in the spring.

The wizard then instructed us to divide the year by eight. This gives us four more dates to consider. These are the halfway points of spring, summer, fall, and winter. Gann said to also divide the year by sixteen. This finally gives us sixteen important calendar days as our focus.

Gann told us that the most powerful resonating points using calendar time was six months or 180 degrees from the beginning point and then back around to the anniversary date itself. As summer becomes very hot and winter reaches frigid temperature extremes 182 days later, so too does stock market action reach volatile extremes. What goes around truly does come back around.

Gann went on to suggest that by dividing the year by eight, into 45 day increments, we would ﬁnd more wheels within wheels. The changing gears of market trends can easily become visible on any bar chart for those who recognize the signposts of calendar time. Gann ﬁnally encouraged us to divide the calendar year by 16. This gives us a complete road map and blue print to predict in advance changes of trend in stock market forecasting.

Here is a listing of Gann’s natural calendar year cycle. Each of these dates are approximately 22 and one-half days apart. Gann tells us to expect general changes of trend year in and year out, based on these natural time frames.

Anyone who is curious enough to research these dates will have discovered a new book of revelations. By just scooping the ﬁrst two dates on our chart for the Dow Jones Industrial Average for 1988 should be an eye opener. The Dow closed at its ﬁrst high for 1988 on Friday, March 18 at 2087. This date is one trading day before March 21. On our second date of April 12 which corresponds to the 22 and one-half degree angle of the circle, the Dow closed at post crash highs at 2110 exactly on April 12. Two trading days later the Dow water-faIled 100 points in one day, conﬁrming a change of trend.

This particular method of marking calendar time from March 21 is more appropriate for commodities, and raw materials that depend on the cycles of the seasons of the earth year.

An interesting sideline would be to take a closer look at the number 365.24. By multiplying this number by seven our sum total is 2556.68 days. This turns out to be precisely seven years of course, and the notorious seven year itch. The remarkable mind-boggler here is that 2556.68 days equals out to exactly 365.24 weeks. This new information totally vindicates the perfect time cycle as being 365.24 and not 360. Anyone who has the capacity to computer generate the complete cycles of 365.24 days, weeks, or years will ﬁnd the mathematical validity of this sun generated number in stock market tops and bottoms. W. D. Gann discussed many times the power of the number seven in stock market action.

The timing of this article could prove to be quite revealing as August 12, 1989 is 2556.68 days or 365.24 weeks from August 12. 1982. The aging bull will be seven years old on that day. Remember micro-man/woman is trapped unconsciously in this same ﬂy paper cycle. All events upon the earth whether generated by group consciousness or individual karmic patterns must ﬂow with the movement of these cosmic energies of space and time.

In my last article I discussed the power of the square of nine in predicting short term market highs and lows. We utilized this system to predict a short term high on March 5, 1988. Well, it looks like we’ve got bragging rights, as the Dow Jones Industrial Average closed at 2081 on Tuesday, March 8, only two trading days from March 5, which fell on a Saturday. This short term top was the post crash high up to that point, with a second top one trading day before the spring equinox on March 18, a Friday.

Is there a way to utilize this cycle of 365.24 to trade the market? There are speciﬁc rules to follow that I have found over time to be extremely dependable in trading stocks, stock options and stock index options. But, I don’t want to give away all my secrets.

I am now in the process of publishing an in-depth stock market course in market timing. This course will include many precise market tools to conﬁdently predict well in advance short, intermediate, and long-term market trends. The course will simplify the many complicated strategies proposed by W. D. Gann.

Each chapter will focus on a speciﬁc timing tool that in and of itself will prove to be proﬁtable. The course will include chapters on Gann geometry, and explain in a simpliﬁed way, the most proﬁtable way to use the angles to enter and exit trades. A complete chapter on the cycle of 365.24 which will explain the precise rules to predict market highs and lows will also he included.

Another chapter will give a complete analysis of the square of nine and its unlimited use as a market barometer. In-eluded is a proprietary minute chart to enter and exit trades to the minute. Also included will be a market system based solely on the daily movement of the sun with a 70 percent accuracy rate. There will be many more chapters with speciﬁc market tools, too numerous to mention here.