The Jiggle Line By Fred Ruscher (The Cosmic Cowboy)

I have been intrigued by the commodity markets for many years. I have actively spent the last few years searching for the “whys” of market movement. I found the jiggle line concept on one such search. The concept is from George Bayer’s excellent book, GEORGE WOLLSTIEN: EXPERT STOCK AND GRAIN TRADER.

(Anyone searching for esoteric market concepts would do well to read all of Bayer’s books.) After reading the book for the third or fourth time I ﬁnally decided to examine the jiggle line, as presented, more carefully. It was a simple matter to program the formula into Lotus 1-2-3 and hand chart it at the bottom of my daily wheat and soybean charts. Its movements puzzled me. Sometimes it would turn down in the middle of a move and price would continue rising and vice versa on a down move. For some reason, though, I steadfastly kept plotting it on my charts for months. I guess it was a case of TANSTAAFL. (There ain’t no such thing as a free lunch.)

Get and Read All George Bayer Books!

In the back of my mind I felt like Bayer had discovered something important but at the rate I was able to plot it I would never be able to learn anything. I simple needed to see more “jiggles” than I was able to see on my hand drawn dailies. To aid in my trading and research I added live Bonneville quotes and Ensign graphics to my arsenal. I had the Ensign program modiﬁed to have the jiggle line appear on any chart. 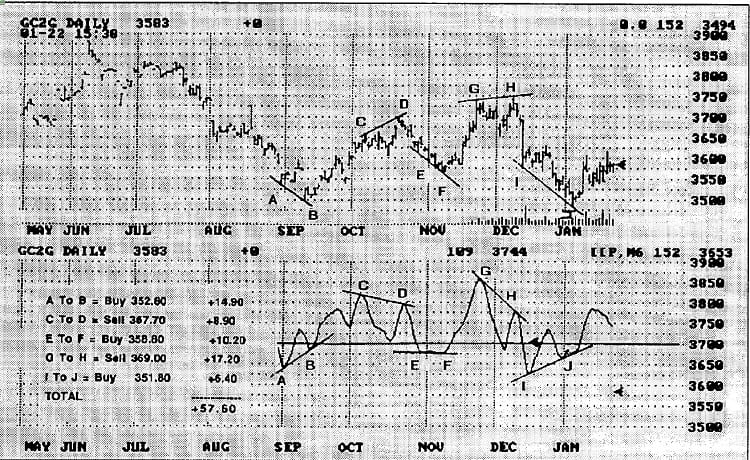 Now I could look at any time (frame) chart from 1 minute to monthly with the jiggle line overlaying both price and time. I found that the jiggle line was actually a type of momentum indicator. Other indicators of the same type that I had studied caused me many whip-saws and great pain (to my trading account). The real break-through came when I ﬁnally noticed how the true signal was being sent. It was by the use of divergence. Prices would make a lower low while the jiggle line would make a higher low. From there it was an easy matter to make a simple system to buy or sell the open of the next day after such a signal was given.

The gold chart presented with this article shows 5 proﬁtable trades (out of 5 possible) up to the current day this article is being written (Jan 21, 1992) with a total proﬁt of $5760 over a time period of 4 months. The stop-loss order never needed to be more than $400 from your entry point on the day of the signal. In a cursory study of 21 years of beans I found that the divergent signal averaged between 6 to 7 trades per year and made an average of $15,000 per year on a one contract basis. (If a simple money management tool is employed your returns are substantially higher.) At least 3 out of 4 trades were proﬁtable if a common sense trailing stop was used. Other commodities have yielded like results. To be effective using this, or any other technique, you need to follow a minimum of 4-6 unrelated markets.