It has often been said that the best place to hide anything is right under the nose of the person who is looking for it. I have found this to be the case with most of the works of W.D. Gann. This simple, effective timing device is mostly not understood. Perhaps it is too simple because people love to complicate things.

I bought my W.D. Gann Commodity Course for about $1,000 (in Australian currency) in November 1985. It has paid for itself a hundred times over in the past twelve months, so I will try to repay some of what it has done for me. I spent twelve months trying to make the course work for me and went up countless alleys. The emblem is, of course, a square and a triangle within a circle. I suppose many have ﬁgured that out, and for anyone who has studied the emblem for any period of time and not worked it out, I don’t give you much of a chance in the futures industry. Now, what does all this mean and how do we use it?

First, Gann said in his writing , ‘There are three important points that we can prove with mathematics or geometry: the circle, the square and the triangle. After I have made the square, I can draw a circle in it using the same diameter and with different squares produce the triangle and the square in the circle.” It is not my intention to go into the construction of squares in this article, but to throw some light on the emblem. 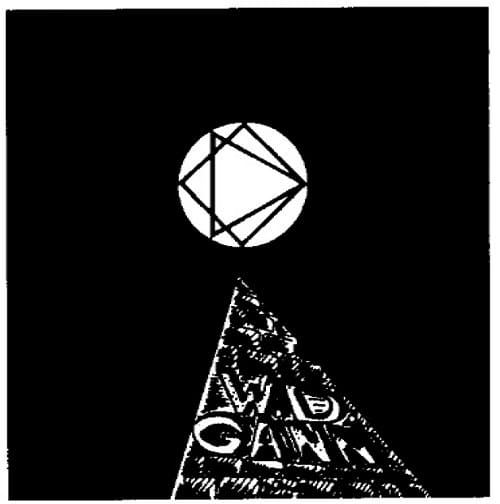 The ﬁrst thing we must realize is that any cycle is a circle. They are just spelled a different way. They go around and around and so keep reappearing. The circle we will deal with is the calendar year. To get things working, you need a calendar year in the form of a circle. I commonly use the astrological circle calendars as they are readily available. I should be on commission for the number I have bought and recommended to people.

Now, we have our calendar year going around the circle. The ﬁrst thing to know is that the year should be divided into two sections between the autumn and spring equinox. Gann always did this. This is essential in Pyramid time. Let’s look at the S&P Futures Contract. We place the point of the emblem on the date of last year’s high, September 18, 1987. Remember, when looking for highs, go to the points of the square. The approximate dates are December 18, March 20 (autumn equinox) and June 19. The points of the triangle give us January 18 and May 18.

The triangle gave us January 18 (last high before February low) and May 18 was nothing. The reason why September 18 gave us December 24 has to do with the degrees of the year. I usually mark highs in green and lows in red so they stand out.

Now for the lows. We place the point of the emblem on the low of November 11, 1987,and what do we get? The lows of February 10, May 12 and August 11. See how all this looks on your daily bar chart. The dates on the triangle of March 11 and July 12 gave us nothing, which prove the S&P Futures Contract is working stronger in squares than angles. That’s good to know when you are working out price.

The degrees of the year are arrived at by dividing a year into 360 segments instead of 365.25 days. Now it is not as simple as a straight division of time but more a division of seasons resulting in four quarters of approximately 87, 92, 92 and 95 days, each representing 90 degrees. The year is divided into two sections by the autumn and spring equinox. I made up a circular calculator which gives me the whole year by degrees as Gann did in his circular charts. A simple way is to run the days in line across a chart of approximately 90 squares and one sees then graphically how the tops and bottoms conform. I call this a 90 degree chart and it is handy in my trading.

Many of the other writers for the Gann and Elliott Wave have done excellent work in relation to planetary inﬂuences, sun spots and solar eclipses. I believe these things have to be used in conjunction with “time.” “Time is the most important factor in determining market movements because the future is a repetition of the past and each market movement is working out time in relation to some previous time cycle (page 64 in the W.D. Gann Commodity Course).”

A study of previous cycles and applications of Gann techniques enabled me to be aware of the exact day of the top of the bull market in 1987 and the dates of the November and February lows, six months in advance. My studies of the “Master Time Factor” indicate Gann could possibly have been right all the time. Perhaps he threw in a seven percent loss in trades to foil people following his every move. That’s certainly the way he wrote.

The markets follow the timing of nature, so do the planets. Some markets make a high at a given date while others make a low. A study of their previous form is very important. “What has been will be again. There is nothing new under the sun. Look, they say, ‘Here is something new!’ But no, it has all happened before, long before we were born. No one remembers what has happened in the past, and no one in days to come what happens between now and then (Ecclesiastes 1:9-1 1).” This is why Gann put the Pyramid on the cover of The Tunnel Thru the Air, underneath the Emblem.

He went over the wheat contract and this is where he discovered his “Master Time Factor.” It was through the wheat contract he could forecast wars, droughts and famine. The Bible is our guarantee. It also tells us we must obtain the old records. Put the Pyramid time and the Emblem together and you have a very powerful tool working for you in any market. But it’s not for everyone. I suggest the keen student also study Ecclesiastes 3:1-15.

Many people ask about the share market. What is it going to do? I see our Australian share market making a top on October 2, 1989. For the American market I have nowhere enough data on the DOW to be exact, but since the 1987 top occurred approximately one month before ours, I would not care to hold stocks after September 3,1989. This is, of course, 60 years or 60 degrees from the 1929 top. An excellent “Gann” time.

I see much drama and panic for all markets around November 16, 1989, but perhaps a buying opportunity before Christmas, say Monday December 18. I hope this has been a help to some of you who have made a study of Gann. At a later date, I hope to write an article based on the book The Tunnel Thru the Air. I think this is the best book Gann wrote.