The Astro-Harmonic Nature of Retrograde Motion By Larry Pesavento

Afew short years ago, most stock and commodity traders would have laughed at the thought of a relationship between planetary movements and price action. The advent of mini-computers and sophisticated astrological software has changed all that! Now a trader has access to huge data banks of price and time parameters to analyze various astro-harmonic cycles. The following is one such example. The planet mercury makes its revolution around the sun in approximately 88 days. This fast moving planet – only our moon moves faster than Mercury is usually visible in the sky each night.

Figure 1 shows the relationship of the earth to the rest of the planets. This indicates that some of the planets take longer to revolve around the sun (they have larger orbits). When a faster moving planet approaches a slower moving planet, the slower planet appears to be moving backward or as astronomers refer to as retrograde motion.’ It would be similar to looking through your rear-view mirror as you pass a car on the freeway. The faster you are going, the slower the car you passed appears to be moving. 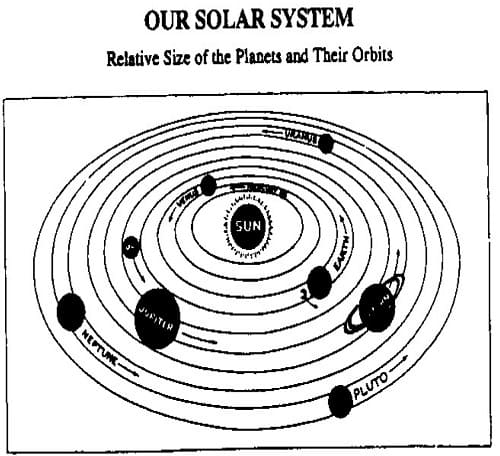 All planets except the sun and moon have retrograde motion when using geocentric (earth centered) astrology.

There is no retrograde motion when using heliocentric (sun centered) astrology. Johann Kepler, the father of modern astronomy, used the geocentric approach because he felt that the earth was “a” center of inﬂuence and not “the” center of inﬂuence. Sir Isaac Newton was also a geocentric astrologer. If it was good enough for these giants of intellectual thought, it is certainly good enough for most ﬁnancial astrologers. Both geocentric and heliocentric astrology can be used to predict market behavior. It would be like going to a baseball game and sitting on either the home team side or the visitor side. The game is the same, only the perspective is different. After ten years of concentrated study in astrology. I have found that certain planetary harmonics such as the retrograde motion of certain planets, appear to have a profound inﬂuence on economic thought (i.e., price action).

A close examination of ﬁgure 2 for November, 1988 soybeans is a case in point. As Mercury moves from direct to retrograde motion, prices begin to vibrate in harmonic time with this planetary phenomenon. Elliott wave theorists may have more than a perfunctory interest in these time frames. Most often they are a Fibonacci relationship of one Mercury retrograde-direct harmonic to another. Mercury is retrograde approximately 24 days and is stationary about a day before and a day after. The trend changes are usually quite abrupt and offer substantial trading opportunities. 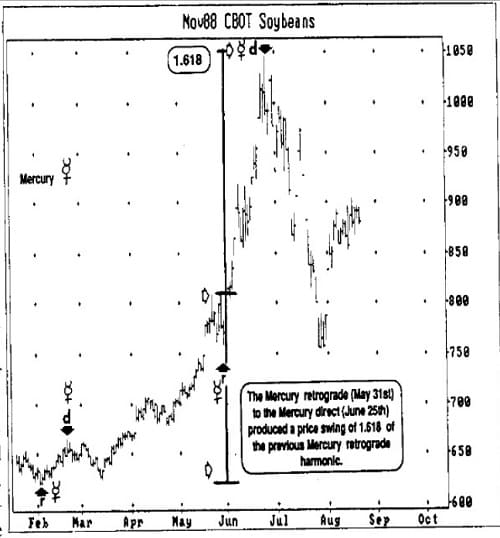 As a ﬁnancial astrologer, I do not advocate using Mercury in retrograde or direct motion as a timing tool or an entry method by itself. It is considerably more complex! The planetary aspects of conjunction (OD, sextile (60 deg), square (90 deg), trine (120 deg), and opposition 180 deg) most assuredly affect price action. A cycles (harmonic) trader has a huge edge when he uses planetary mathematics to help time his trades. Space does not permit me to discuss the Jupiter-Uranus cycle which is associated with the 40-month economic cycle. Dewey and Daiken in Cycles – the Science of Prediction relates this study of using the Jupiter-Uranus planetary aspects (angles). Think about these facts:

Newer An Interview with AJ. Frost -Elliott Wave Octogenerian By Mark Leibovit
Back to list
Older More Proﬁts with Gann, Elliott and Fibonacci By Robert Miner