What are spread trades, how do they work, and how can we use them? The spread trading strategy receives too little attention even though a well-designed spread can offer excellent profit potential while decreasing risk. Spread trading isn’t viewed to be as glamorous as directional trades, so at the risk of turning you off I am going to turn your attention to what spread trades are and how they work; when they make sense; and how to implement them. Finally, I will show you a concrete example of how spread trades work in an actual trade.

What Are Spread Trades?

A spread trade essentially involves at least two trades. One side of the trade is a short trade, while the other side of the trade is a long one — hence the term spread. A pure spread trade usually has both the long and short sides roughly equivalent in terms of size (total dollar exposure). In a market that carries elevated risk for each trade made (the volatility is higher than normal) and suffers from larger-than-normal price dislocations, spread trading provides an excellent opportunity to capture the volatility while reducing risk. Typically, in such an environment, the market participants are necessarily holding higher levels of cash as a result of the volatility. Rather than have that cash just lying around, involving it in a hedge trade offers a viable alternative.

Although there are many paired trades (spreads) that can be made (in a higher-risk market environment), an excellent way to spread trade is to go either long or short a particular equity while simultaneously trading the sector in the opposite direction. In a higher-volatility market, price disruptions are more common and usually results in greater-than-normal spreads.

As a trader in a volatile market seeking to reduce risk but still garner profits, your job is to examine and identify conditions where a stock within a sector proves to be performing better or worse than the sector it is part of. This determination is best made during the earnings season where companies report either disappointing or positive surprises. When such an event occurs, if the sector outlook is at odds with the changes of fortune for one of its component companies, then an opportunity emerges.

How To Enter And Exit A Spread Trade

Once a potential spread trade is identified (a strong stock in a weak sector or a weak stock in a strong sector), your plan has to be put into place. Ideally, you should put the trade into place in increments averaging into the trade at varying price points. The safest way to do this is to buy and sell the respective sides of the trade simultaneously. If the market is particularly strong or weak on the day you begin averaging in, you can increase your risk slightly and attempt to use that strength or weakness to your advantage by placing one leg (one side) of the trade on when prices push too far intraday, and then legging into the other side of the trade as they retrace intraday.

How much you invest is a function of your risk tolerance, but a well-placed spread trade entails less risk so a doubling or tripling of your normal allocation size is not excessive. Assuming you did your homework well, to exit the trade, you simply remove both sides of the trade simultaneously. You should avoid trying to exit just one side of the position lest you give back the gains you made on the paired trade, or worse, exacerbate losses you have already accumulated.

Here is an example of a spread trade that offers greater reward than risk. On August 13, 2009, Wal-Mart (Wmt) reported earnings that surprised the market. This resulted in the stock price being bid higher, rising almost 3% (Figure 1) on the day. 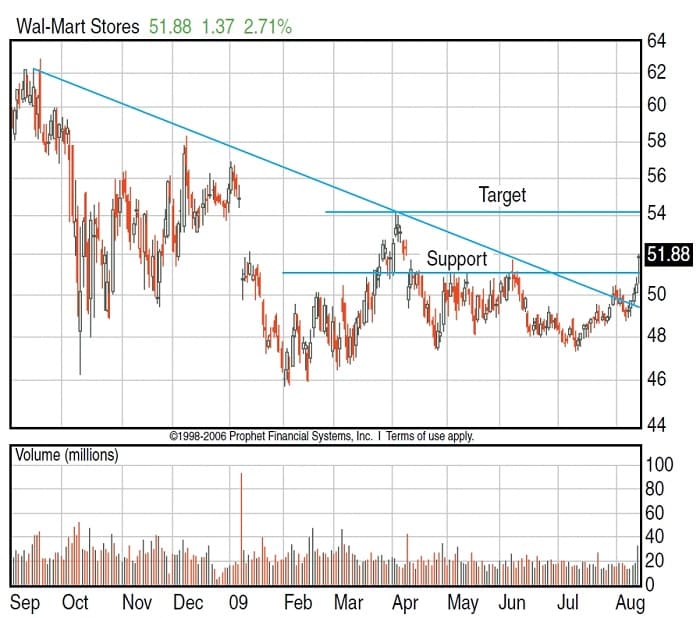 FIGURE 1: WAL-MART (WMT). On August 13, 2009, the company’s earnings surprised the market, which resulted in prices rising almost 3% higher on that day.

The retail sector Etf (Rth) rose a little less than 1% on the same day (Figure 2). Clearly, Wal-Mart exhibited relative strength on their earnings report. The very next day, retail sales were reported weaker than expected and Rth lost about the same amount that it had gained the previous day, while Wal-Mart barely budged. Once more, the market is telling us that there is relative strength in Wmt as compared to the broader Rth sector Etf. 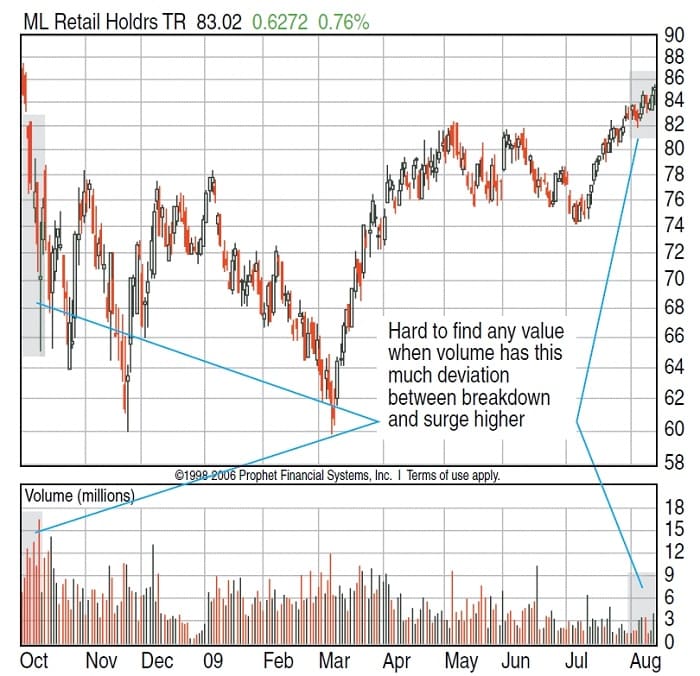 FIGURE 2: CHART OF THE RETAIL SECTOR ETF. You can see that RTH rose a little less than 1% on the same day.

Examining the internal makeup of the Rth Etf, I found that Wmt accounts for almost 22% of the sector Etf (Figure 3). Ideally, it would be better if the percentage were not so high, but then again, few trades are perfect. The risk versus the reward is what is critical, and that critical part of the equation is favorable, as discussed next. 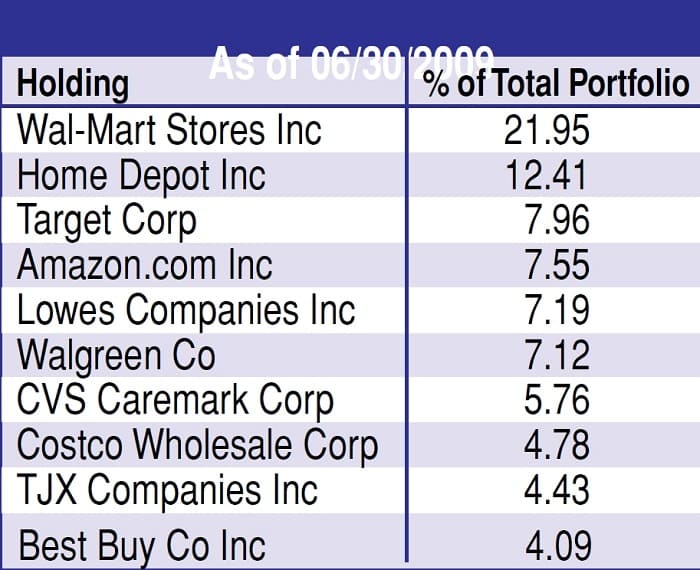 FIGURE 3: INTERNAL MAKEUP OF RTH. Here you will ﬁnd the stocks that make up most of RTH.

An In-Depth Look At the Relevant Charts

Turning your attention to the charts, you’ll note that Rth has managed to move higher despite decreasing volume, which eventually becomes a problem. Higher prices not accompanied by higher volume will eventually succumb to selling pressure. As can be seen in the chart of Rth, current volume compared with volume when prices were falling a year ago is at absurd levels. This suggests that prices for the broader index are more likely to decrease over the near term rather than increase.

Now compare the volume in Wmt as a result of their earnings announcement. Volume surged on the increase in price: a stark contrast to what was witnessed in Rth. Although volume is not above the levels seen when intense selling hit a year ago, there certainly is no comparison between Rth and Wmt with respect to this factor.

A paired spread trade can offer ideal opportunities for the astute trader.

Additional factors are that Wmt is at a much lower price level relative to Rth and on a short-term basis has solid support around the $50 level and should be able to reach the $54 level. Rth, on the other hand, is more likely to pull back to the $82 level before moving much higher at all. In the worst case, if Rth pulls back to the $80 level, it is about a 6% drop in price. Wmt back down to $50 would represent a 4.7% reduction. On the flip side, if prices continued to rise, Wmt would also outgain Rth as it clearly shows distribution in its chart, while Wmt shows accumulation. 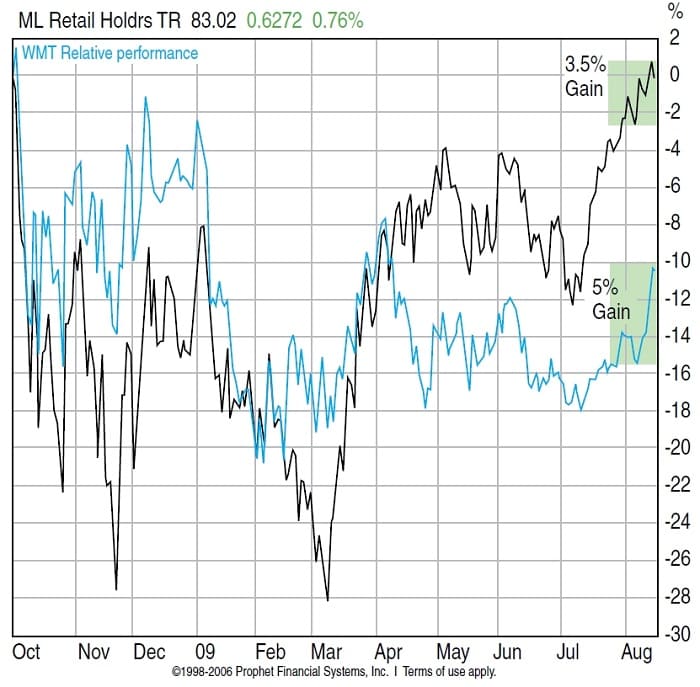 The real measure of the trade can be more easily seen when you overlay Wmt and Rth as shown in Figure 4. Here we can see that in the past two trading days, Wmt has gained 5% while Rth just 3.5%. What’s more important is that Wmt has greatly underperformed and the spread between Wmt and Rth is near the highs for the past year. A 50% reduction in the spread between these two instruments could represent a 5% gain on the spread trade.

The risk is that the spread widens again. You should determine how much you are willing to let the spread widen prior to entering the trade and use that spread percentage as your stop-loss target. In this example, the spread should not widen too much more than it was prior to Wmt’s earnings surprise, or a 14% spread differential.

A paired spread trade can offer ideal opportunities for the astute trader. When times are more volatile than usual and a trader is forced to trade smaller on unidirectional trades, a paired trade offers the opportunity to put more money to work and do so with less risk. An astute trader can capture profits with less risk in such an environment by examining relationships between individual stocks and the sector Etfs that they trade in. Earnings announcements offer ample opportunities when viewed in this light.

L.A. Little is an author, professional trader, and money manager. His new book, Trade Like The Little Guy, shows small traders how they can consistently profit in the markets. These methods allowed Little’s investors to sidestep the huge losses of the past year and actually turn profits again.