Venus revolves around the Sun in 61.8% of I year (365 days). Uranus revolves around the Sun in 84 years.These two planets possess the unique Fibonacci relationship of 0.618! Figure I shows the relationship of Venus and Uranus when they are on opposite sides of the earth or in opposition (180° apart). This is how it would appear from the Earth looking up into the sky. It takes 225 days for Venus and Uranus to make a complete cycle from conjunction (0°) to conjunction (0°). If we take 365 days and multiply it by 0.618 the answer is 225 days.

When I first witnessed this relationship it was apparent that the cyclical implications would be revealing because of the Fibonacci number sequence.

Donald Bradley in Stock Market Prediction  mentioned this effect on stock prices when Venus and Uranus were at certain critical degrees (aspect). After studying this phenomenon for many months, certain applications became apparent from the trader’s viewpoint:

The amount of research to verify this idea was frightening, but once I had seen the stock market reverse direction on these days, the question had to be answered. I have studied the technical implications of cycles in stocks and commodities for over twenty years, and I must admit that it is the single most accurate shortterm timing mechanism I have researched. Figure II shows the last six months of the Standard & Poor’ s 500 futures index.

Figure III shows that certain aspects have a positive effect and others have a negative effect. For your convenience, I have listed the next six Venus-Uranus aspects in 1988. The serious market student owes it to himself to mark these days on his calendar:

The S&P 500 chart on Figure II indicates the last two solar eclipses. Although eclipses bear no relationship to the Venus-Uranus aspects, eclipses are so astrologically significant that they were included in the chart.

Several other researchers have mentioned this Venus-Uranus correlation, such as James Mars Langham, Cyclical Market Forecasting Stocks and Grain and T.G. Butaney in Forecasting Prices. 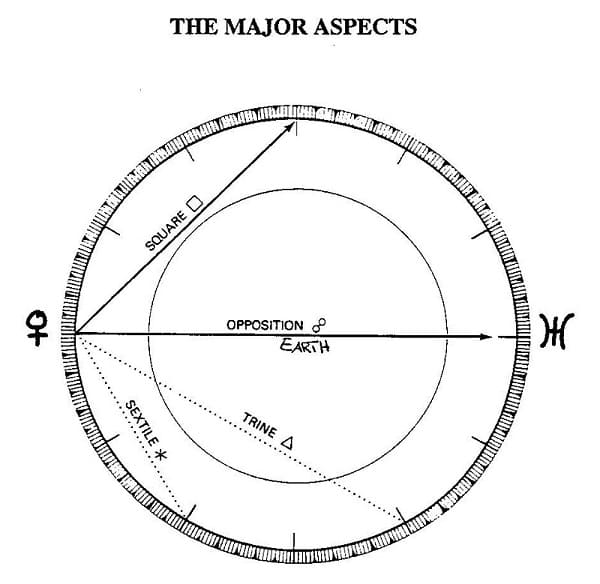 Figqure I: This graph shows the relationship of Venus opposition Uranus. Planet Earth would be in the center. (Geocentric) 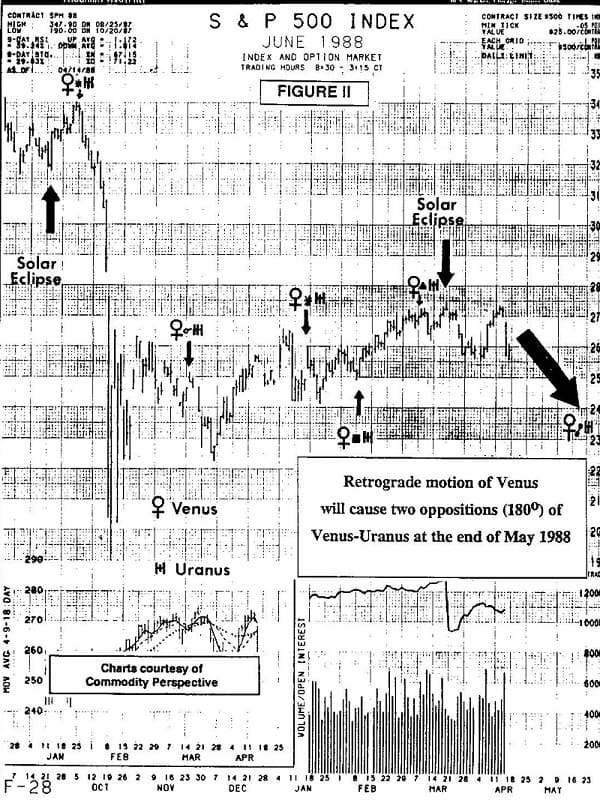 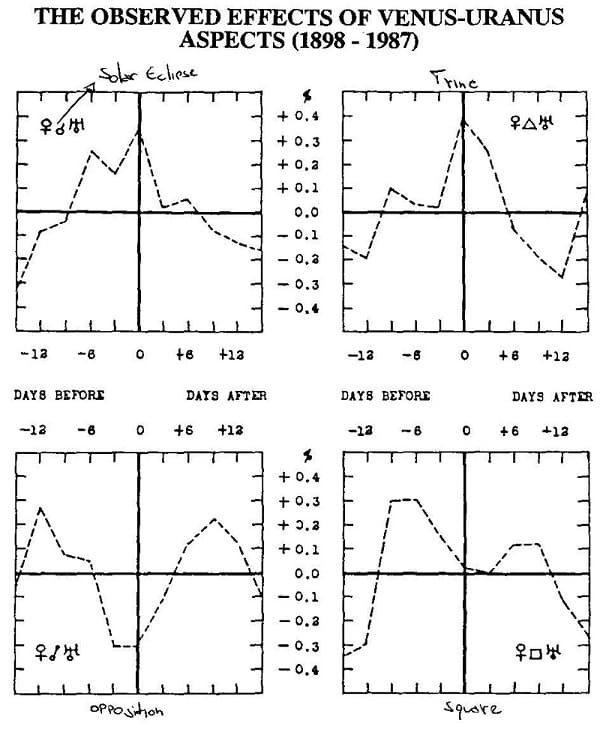 Figure III: Actual observed deviations due to the action of Venus-Uranus aspects. Broken line indicates course of Dow-Jones Industrials during 31-day periods centered on the dates when aspects were exact. Expressed as a percentage relatives of 15th day previous to aspect, taken as base, and corrected for trend by method of least squares. This experiment confirms astrological theory which claims that certain aspects are bullish, others bearish. 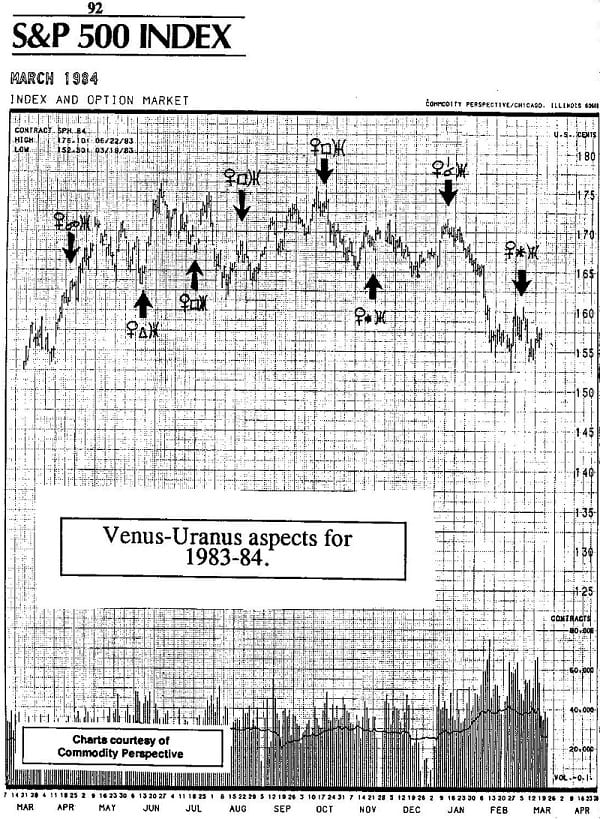 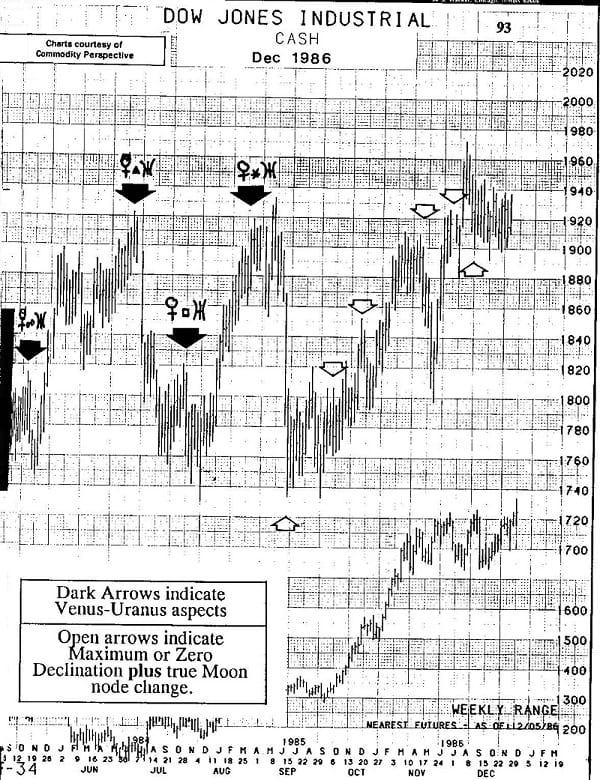 See also  The Law Behind the Markets By Lee J. Franklin

The Jupiter-Saturn combination has been reported as one of the best indicators of long term economic activity. Lt. Cmdr. David Williams in Financial Astrology shows that the Jupiter-Saturn conjunction cycle was the most accurate of the astroeconomic cycles he researched. From a trader’s standpoint these are slower moving planets and their effect may take months to form.

Jupiter revolves around the Sun in 11.8 years. Saturn completes the revolution in 29.4 years. Their synodic period is 19.8 years. The Appendix lists the Jupiter-Saturn aspects for your convenience. It is my opinion that the Jupiter-Saturn aspects would be difficult to use in trading because of their long term implications. One should keep in mind when these aspects occur because of their significance to overall economic activity. Jupiter and Saturn are the largest planets in our solar system and Saturn is the only planet whose magnetic pull is touched by another planet, that planet being Jupiter.

The planets Venus and Pluto have an average synodic period of 61.6% of one year! In other words it takes approximately 225 days for the two planets to meet at conjunction (0°) and travel through sextile (600), square (90°), trine (120°) opposition (180°) and back to conjunction. These two aspects are excellent short term trend indicators in the stock market and gold market, especially the gold market. The high in gold in 1980 was associated with Pluto moving into “retrograde motion” and several major aspects of Venus. It is my opinion that the reason the Venus-Pluto aspects are so dependable is due to the Fibonacci relationship of the two planets. Whatever the reason may be, they still offer a powerful tool in timing gold and stock market transactions. The aspects usually work within two days of the exact aspect and the effect lasts for 5 to 10 trading days. 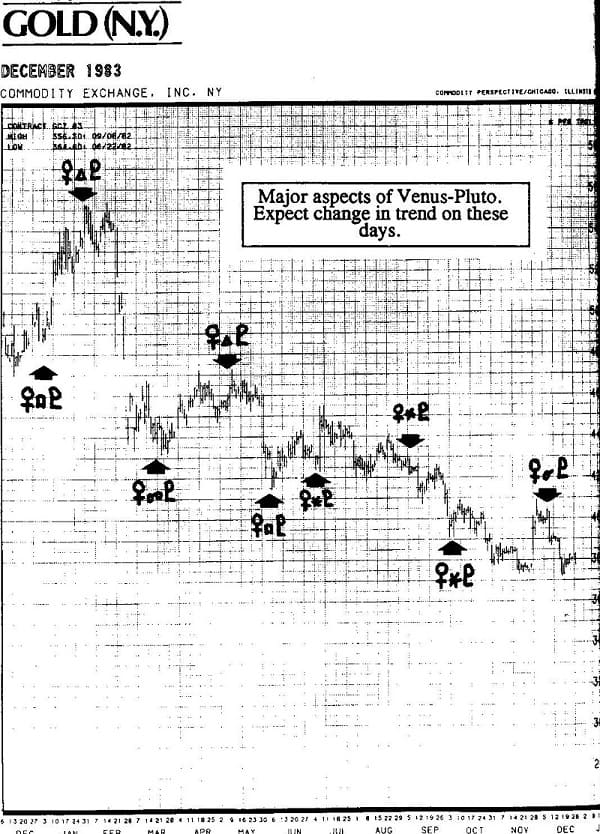 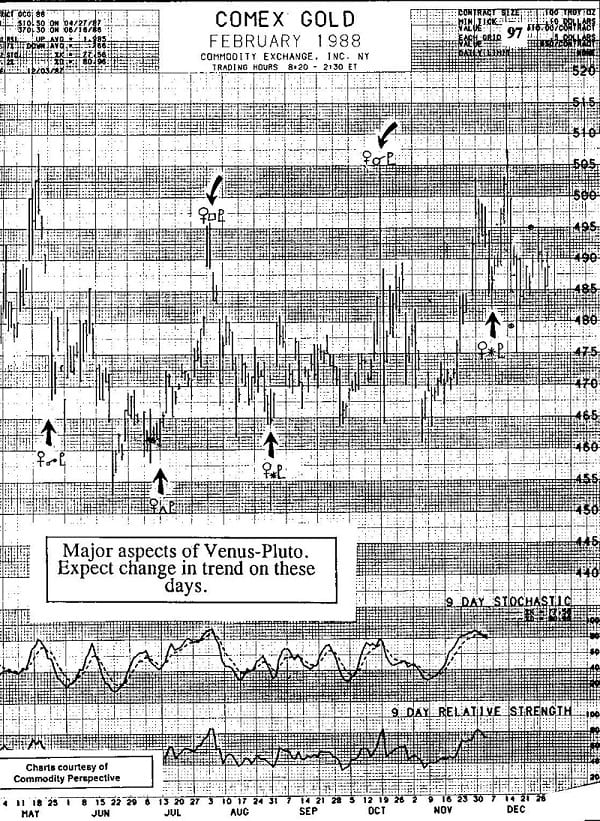 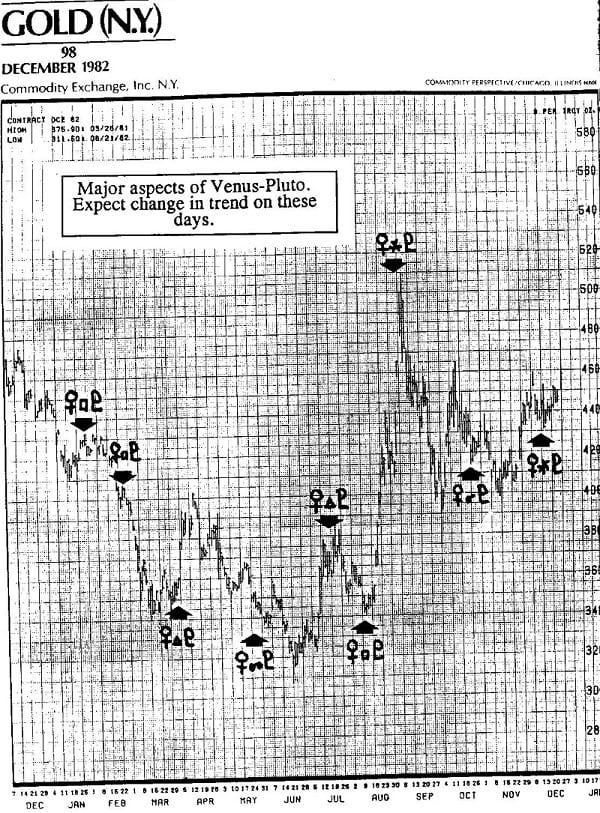 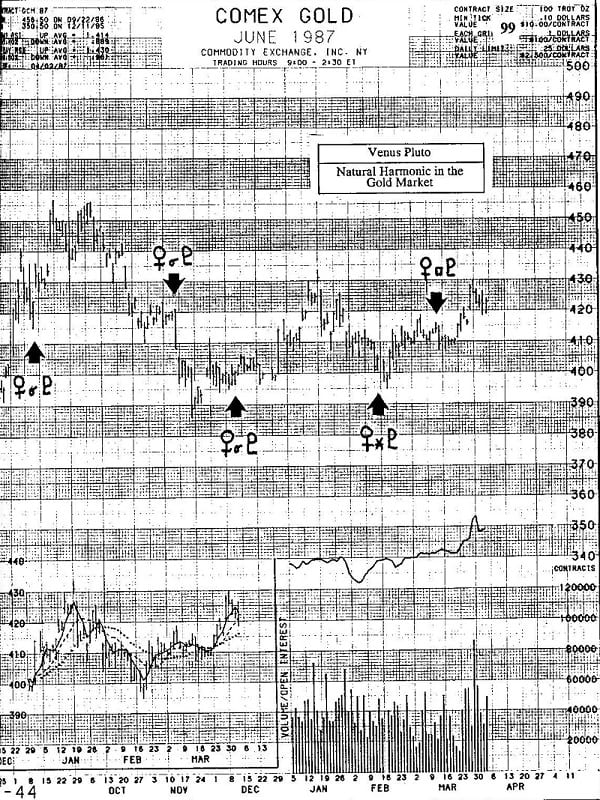 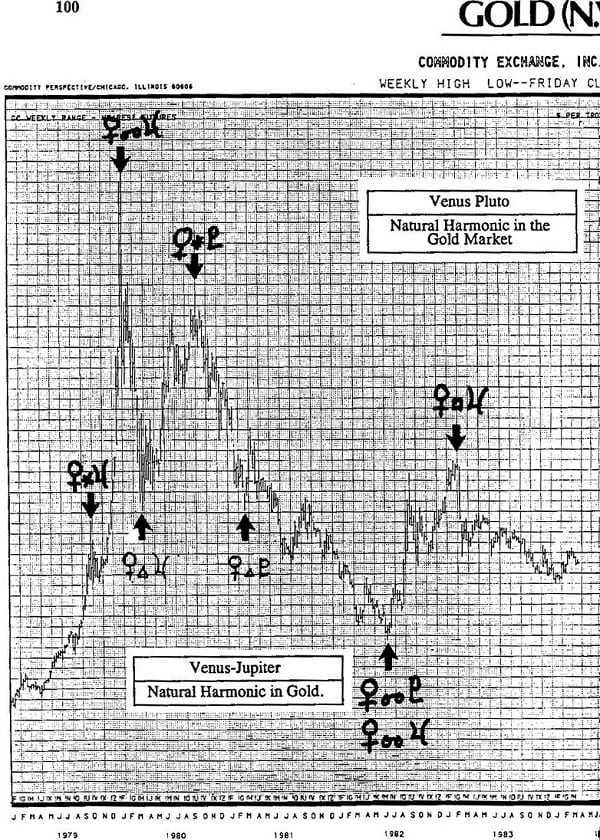 Newer Astronomical Division of The Heavens By George Bayer
Back to list
Older Verify Your Chart Patterns By J.M. Hurst