In the previous articles of the Gann & Elliott Wave the ﬁrst three factors were presented for illustration. First, the astrological TIMING points for trading the minor cycle of one year. Second, the G-A-N-N2-B/S (buy/sell) FORMATION, what it is and how to deﬁne it, and when to act upon proven confirmation of the pattern following Rule number 25, implementing an OFF-CON (I) & (2) condition. The third factor of importance was determining from a zero-degree beginning point of TIME, a square (90 degrees) or trine (120 degrees) in time or price on the GANN WHEEL, combined with the odd and even natural square-root numbers on the GANN WHEEL for support-resistance levels. The odd squares begin at the peak of the Gann Wheel, the Great Pyramid of Gizeh, with number one as the capstone. The next square root level, square or course of stones, begin at number two and ends with number nine or Y (three squared). The square root of these odd numbers, which fall on the ﬁxed angle of 41.475232 degrees to the South-West compass point, are the cornerstones for each course or square on the Great Pyramid. 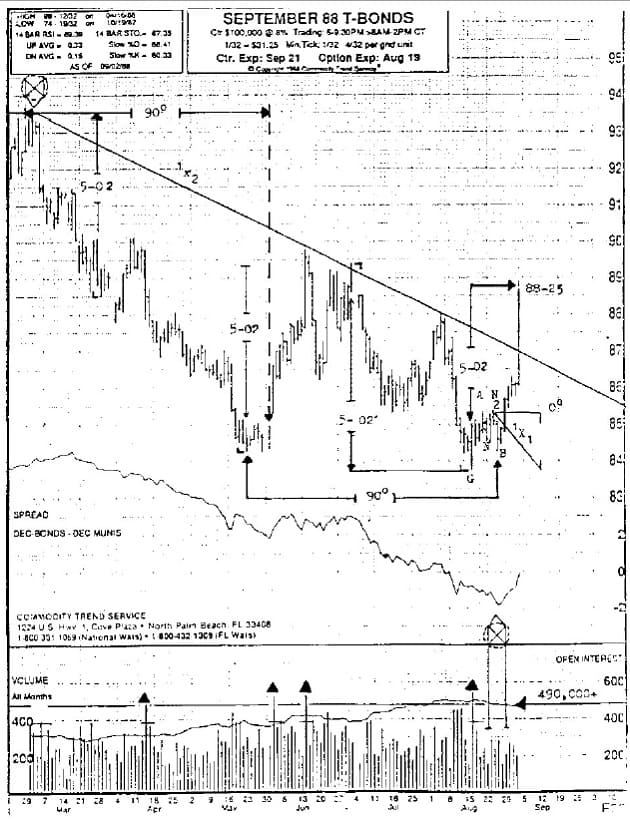 For brevity, I only use two conditions of readiness rather than the four conditions in the movie. A stage (2) OFF-CON is “PREPARE TO BUY,” a stage (I) OFF-CON is the actual pulling the trigger for the buy executions CONFIRMING the G-A-N-N2-Buy formation, similar to the DEFCON (I) condition in the movie, where the missiles are actually launched.

Now, Gann’s fourth factor VOLUME OF SALES as another KEY, signiﬁcant in trading T-Bonds. Notice the KEY TO DAILY VOLUME at trend turning points is 490,000+ contracts on 4-14-88, 6-1-88, 6-14-88, and 8-16-88. Here Gann says the trade has made up its mind, a change of trend is eminent and reveals it through ONE-DAY VOLUME of 490,000+ contracts. Yet, even with the KEY TO VOLUME, Gann, in his inﬁnite wisdom, says, “In order to be a success, “FOLLOW A DEFINITE RULE.” Remember Gann’s rule number 25? Let the market prove ills at bottom with the G-A-NN2-B formation as the formation, provided nine trading days of accumulation prior to conﬁrmation of entry in OFF-CON (I) on 8-29-88.

In conclusion, I would like to make you aware of two Aphorisms of Pythagoras, number four and number nine (an aphorism is a short pointed sentence expressing a wise, clever observation or general truth). Number four states, “assist a man in raising or lifting his burden; but, do not assist him in laying it down.” In this article I have done my best to help and assist you in your trading by giving you the tools to raise yourself up and out of the 90 percent losers, 10 percent winners ratio, which because of human nature, stays the same every year. However, you must be responsible for your losses, as well as your gains, and not place the blame for your losses on others.

Pythagoras’ aphorism number nine states, “offer not your right hand easily to anyone.” This statement warns not to offer wisdom and knowledge to those who are incapable of appreciating them. Gann would cast a birth chart (horoscope) of the individual purchasing his courses. In this way, he was trying to determine if the individual was skeptical or was capable of studying long and hard about the truths he was trying to teach. Gann wrote voluminous am-mounts of material to create a desire in the individual to search for hidden truths, much in the same way the ancients in the past clothed their secrets in veiled language; such as the writers of the Bible, Plato, Aristotle, and Pythagoras, to name a few.

Gann, in his wisdom, realized the unregenerate do not desire wisdom and knowledge, but through indolence would eventually cut off the right hand that was extended in kindness to them. Once one learns to like themselves, has a continuous positive winning attitude, takes responsibility, practices the greatest of virtues-patience, and follows a disciplined technical approach to Gann’s rules, then, and only then, will it be your time and season to reap material wealth.

Newer W. D. Gann and Astrology By Norman Winski
Back to list
Older Gann and the Circle By Chris Kakasuleff