Many of you have spent countless hours pouring over Gann’s notes, with little result. This has left many disillusioned, about Gann and his methods. Hopefully, we can cut to the chase here, as you take a guided tour through “Tunnel thru the Air” and other Gann works.

W.D.Gann’s “The Tunnel Thru the Air” has been studied by generations of traders, since he  wrote it in 1927. Whilst there has been much conjecture about the veiled messages contained in his text, there has been little evidence published to support the theory, that some PRACTICAL  astrotools were disguised in the TTTTA text.

Gann concealed his methods in coded messages, since he knew that the world was not ready  for the implications of his work, in 1927. As we progress through this exercise, you will see that he was quite correct and even now, some “Gannsters” have been critical of the release of this information, at all. Since decoding the messages, held in TTTTA,  it has become apparent, that this knowledge is being revealed ….. just when, mankind needs it most.

Where to start our search for the TRUTH:

Up front, all astrocharts used here were calculated, using a ONE degree orb, so there is little room for cheating or vague interpretation of the aspects shown. Recently, we posted the chart below, it shows an important pattern, associated with 144 degrees.

Our chart shows, how the moon triggered biquintile (144 degrees) aspects made with Uranus,  Pluto and Vesta to form a five-pointed  “pentacle star”, on the afternoon  before  the US and Australia joined forces, in the “pre-emptive strikes” on Iraq, in March 2003 air strikes, that were supposed to kill Saddam  and his sons, while they ate. 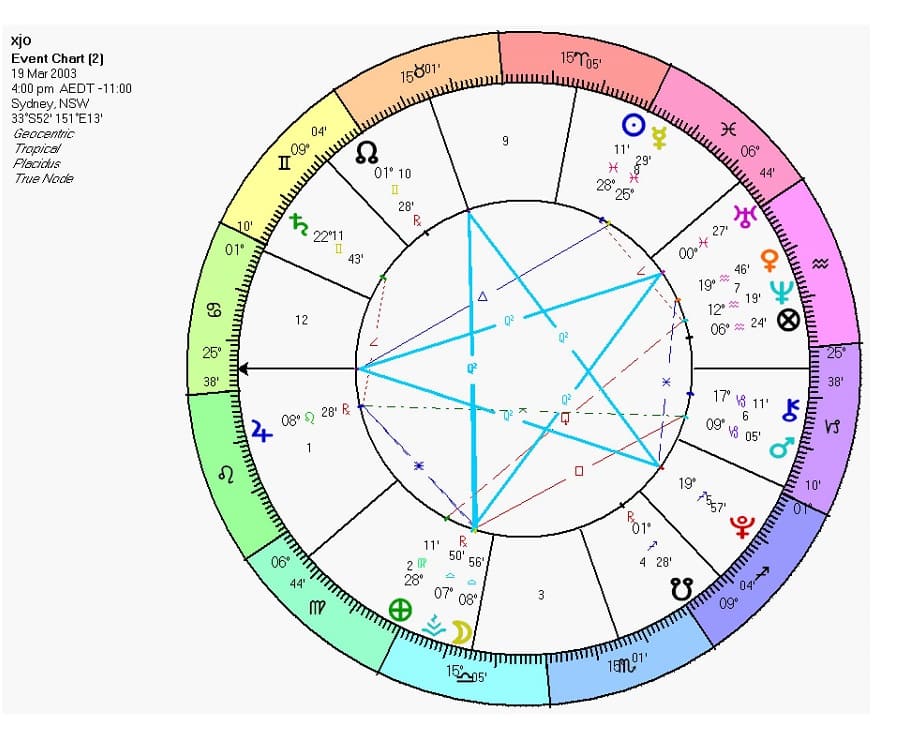 Study Note:  Further information about the 5-pointed star may be found in the following books:

“The Kabala of Numbers” – Sepharial.

So, it is interesting to pursue this train of  thought, about Pluto, a little further … first, Gann’s natal chart shows Pluto at 25:29 Taurus and this degree is the first important clue we will have in decoding “Tunnel thru the Air”.

Pluto was not even discovered, when Gann wrote “Tunnel” and like the ancient astrologers, Gann’s work focused on the two luminaries, Sun and Moon and 5 other planets, outwards-to Saturn.

In the charts ahead however, we will see how Pluto can help us delineate some of the geometry, in our astrocharts. 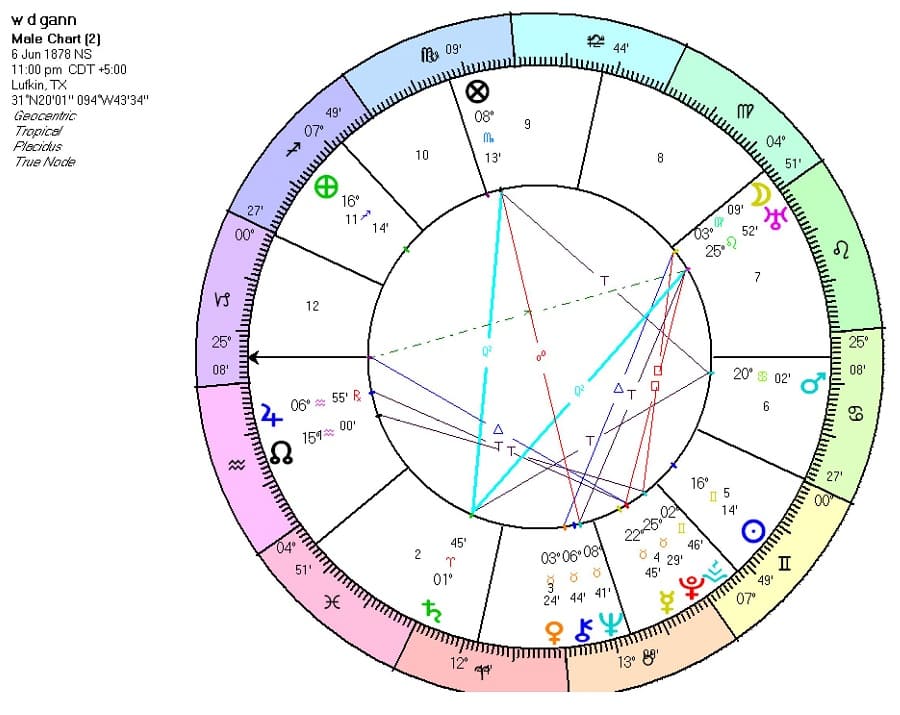 Now, if we consider Gann’s natal chart (inner) and combine it with a chart on June 6th 2006 (outer), we will see that Pluto has journeyed through 210 degrees, in 128 years and makes an exact quincunx to its natal position on 06062006.

Pluto is also conjunct the Galactic Centre at that time, so we are likely to see full exposure of Gann’s work by then along with a lot of other astrological details. So, between 06 June 2006 and 31 December 2006 should be an interesting time for both traders and astrologers. Given that Pluto relates to the “underground”, we should also consider the 100 year anniversary of the April 1906 San Francisco earthquake . 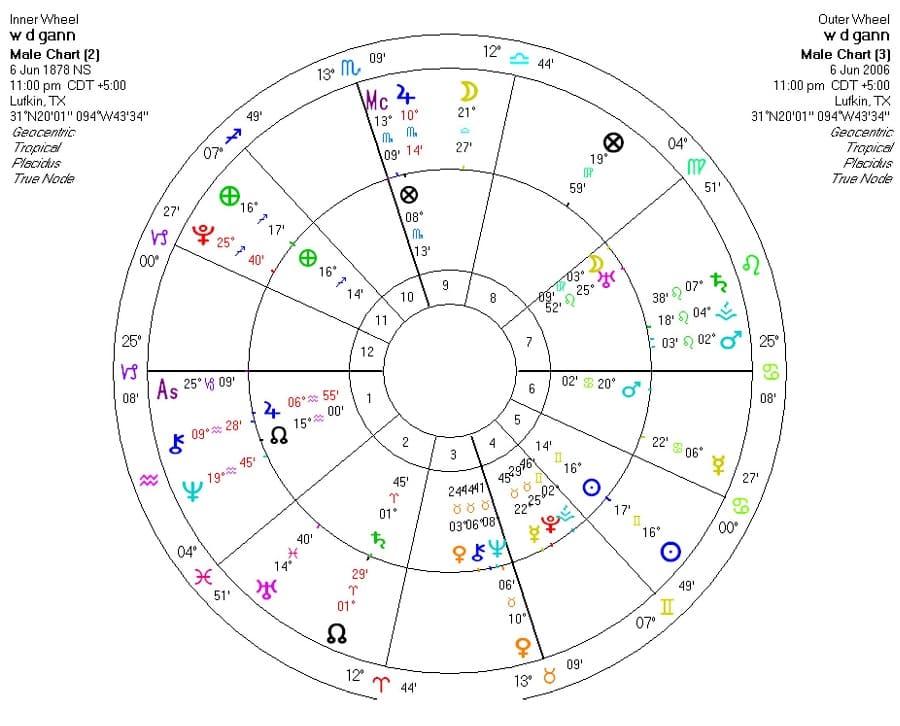 Of course, there’s lots more to be found in the astrocharts, including Gann’s own natal and anniversary charts

Luckily, we have been able to draw on expert astrologers, to help us unravel the deeper interpretations of these charts .you will meet one of them, in the next section of this book.

Consider this chart, on Gann’s anniversary on 6th June 2006, this time we see 5 biquintile aspects, with 7 major planets involved including Pluto, Vesta, Uranus, Moon, Saturn, Venus, Jupiter, Mars and Earth . Many of these same planets figured prominently in Gann’s natal chart and our chart, showing the “pentacle star” . More on that, later. 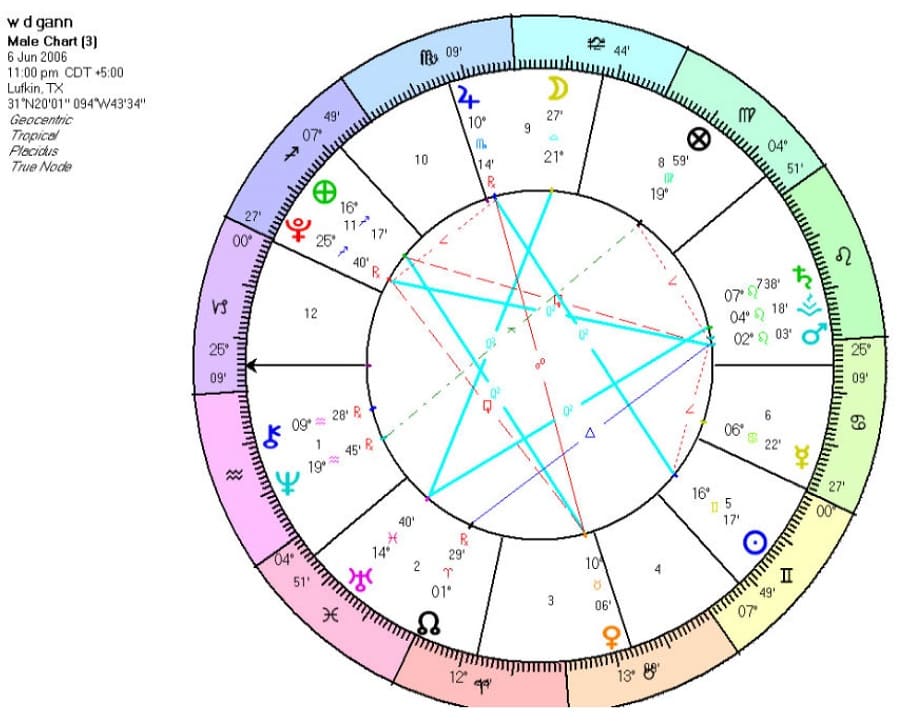 You will also notice, that the parallel biquintiles are 36 degrees apart and there’s also two semisquare aspects that figure prominently, between the main players, also aspected by the biquintiles.

June 06, 2006 may mark another significant conflict or event on the global calendar … you can find out why this forecast should stand up and WHERE it will take place … be sure to read, this series of books on decoding TTTTA and how important TTTTA really is, especially in terms of global peace.

Aside from the biquintile aspects of 144 degrees,  there’s many other associations that can be made with the number 144 and our zodiac.

Of interest to some traders, will be the “wheels-within-wheels” concept, which originated in India and treats each sign as a mini-zodiac sign.

For example, our normal zodiac is represented by 30 degrees for each sign, but the Indians break each 30 degree sign down into a mini-zodiac, each signs spanning 2.5 degrees and using the same names for all 12 signs. Each of these signs is called a dwad.

So, with a further 12 signs inside each original zodiac sign, then there becomes 144 divisions in the zodiac, in total.

Some traders will see these divisions, as being akin to the decanates in a western astrochart … and in fact, there is a unique association between the two methods, that can be  measured quite accurately.

Later, we can look at more 144 associations too, especially with regard to TIME !~!

Lots more later, this is just the beginning of our journey. Recently, some traders have asked for a study guide, to help them sort out the wood from the trees. As we progress, there will be many links to online resources, that can help in your quest for more general knowledge, as well as trading know-how. Whilst the original sources of Gann’s research would be a huge advantage to us, they are NOT absolutely essential for decoding TTTTA or understanding Gann’s trading methods. MOST IMPORTANT:

Your progress ahead, will be hampered significantly, if you do not have a grasp of SIMPLE astrology, BASIC geometry and mathematics !~!

My work, presented in the volumes ahead, will assume that you have already done your homework and have some basic skills, in all of these sciences.

It has become evident, that Gann uncovered a branch of science that has been hidden for thousands of years. To understand his work will take both DISCIPLINE and EFFORT.