Astronomical Division of The Heavens By George Bayer

In order to understand a science well, we have to get acquainted with its fundamentals or elements. They represent the frame of the entire building. If a fundament is lacking, in other words, when the basic laws are not completely and thoroughly understood, we are constantly limping. Otherwise everything seems to be half baked. Half-baked knowledge is very dangerous and costly.

Under heaven or sky we understand the blue bowl, which seems to surround our earth from all sides. When we look into the sky and note on a clear evening the hundreds of fixed stars and planets, we cannot conceive anything about their actual distances from us. They appear about equally far away, since nothing is present in the sky that would afford to make a comparison. The stars seem to be on the border of our sky-room. This way we obtain a conception that the sky is a round bowl dotted with stars.

But what are stars? They are heavenly bodies such as our Sun and only because we assume our Sun to be the Main Star of our Universe, can we detect and say that the other stars must be much farther distance from us, since they appear as glittering points. Fixed stars is their usual name. They sparkle and glitter. There is another type of stars, the wandering stars or planets, which change their positions in the sky continuously. It must be understood, however, that the fixed stars also possess a small movement of their own, so that actually there are not even fixed stars. These movements are minor, invisible to the naked eye. The various groups of fixed stars today form the same types of pictures as they did several thousand years ago. From this fact we get the idea that the fixed stars are fastened to the heavenly sphere and that their sphere is turning every twenty-four hours from East to West around an axis.

By comparing the stars’ and planets’ places with these lines and points at different periods, we obtain a basis from which to judge their movements, their apparent occasional stationary positions in the skies, their direction and speeds.

In order to fix the position of the stars and planets, several imaginary lines are used:

What is the Horizon?

When we stand in open country and look around, we quickly note, that the earth’s surface appears as a round plane, in whose center we are ourselves. This circle of vision is called the Apparent Horizon. Everything seems to be bordered by the bowl of heaven, which appears to rest on it. The True Horizon is a plane, parallel to the one just explained, but running through the center of the earth. Thus, this true horizon is always a greatest circle of the heavenly bowl proper, and divides that bowl into two equal parts.

Let us assume we put into the place of the observer, or into the centre of the horizon a vertical line. We then obtain with this imaginary line the Axis of the Horizon. To obtain the idea of an axis, we extend the line on both sides through the earth up to the heaven. Where this line touches the heaven we have the Poles of the Horizon: above, the North Pole, called the Zenith, below, the South Pole, called Nadir. Circles drawn through these two points, whose plane passes through the centre of the earth, are called Vertical Circles. ( See Fig. 2 NZSZ’ ) 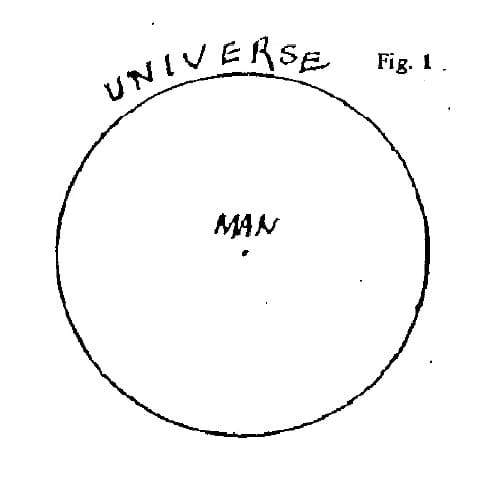 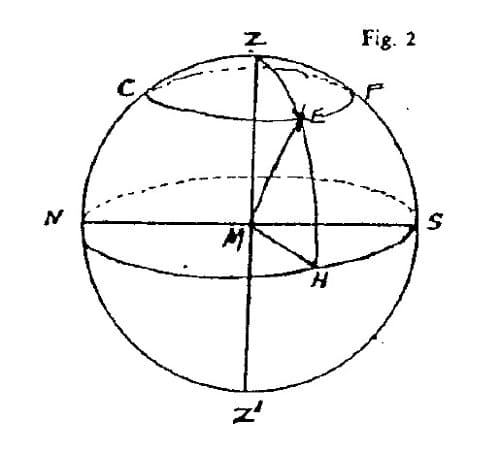 The distance of a star E from the horizon or the angle that is formed by a line drawn from the Observer towards the Star, is called the Altitude of the Star (EMH).

Read Book: Aspects in Astrology: A Guide to Understanding Planetary Relationships in the Horoscope

The angle which complements this altitude to a right angle (to 90°), is called the Zenith Distance (EMZ). All points of equal altitude lie on one and the same Altitude Circle, such as EFC. These altitude circles, since the sky appears like a bowl, become smaller, the more we imagine them removed from the horizon. A point in the horizon has an altitude of 0°, whereas the point of the Zenith has an altitude of 90°. All other points lie between 0° and 90°.

The horizon is divided into four parts, the four points of the compass. When we look at noon towards the Sun and imagine through this Sun a semi-circle standing vertically on the horizon, the point cuts this horizon is Midday or the south point; opposite of this point is the Midnight point or the north point, towards the left, 90° away from the former, is Morning or the East point and opposite to it, Evening or the West point. In these latter points the Sun rises and sets on March 21st and September 23rd each year.

The arcs between these points are, of course, still further divided. We obtain NE, SE, NW and SW. Between the sub-division points we still have smaller parts, but they are only used for navigation. They have no practical value for our specialized work. They would furnish us a 16th resp. 32nd division of the circle for which we have no use and which division would be even detrimental to us in our operations. Forget them!

When we consider the axis of our earth to extend infinitely, calling it the World Axis, it meets the north and south pole of the heaven, or the World Poles.(NS) Fig.3.

The plane of the Earth’s Equator extended outward towards the heaven describes on it the Heaven’s Equator.(Fig.3 AQ). 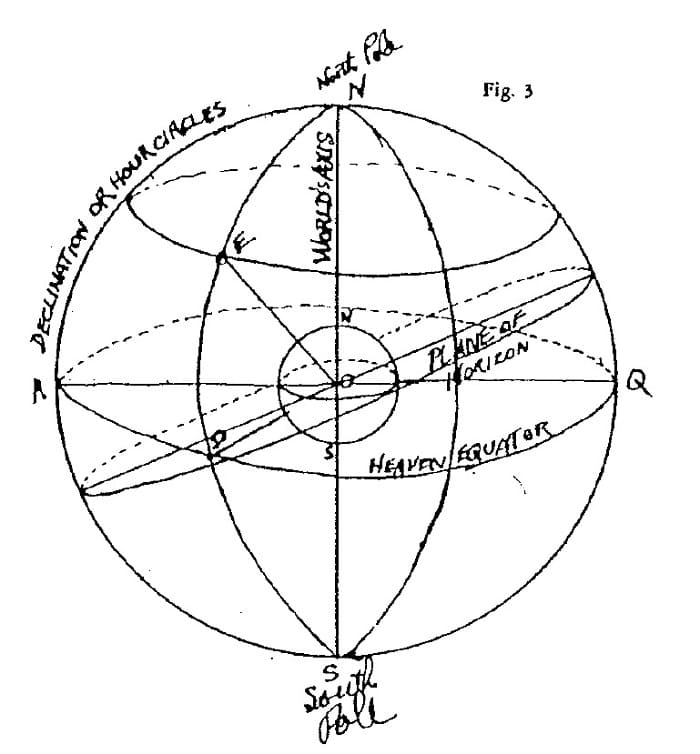 Therefore, the latter is an imaginary circle, placed on the inside of the apparent heavenly bowl, whose position is fixed by extending the plane of the Earth’s Equator into the heavenly sphere. On March 21st or 22nd also on September 23rd of each year we find the Sun in this Heaven Equator and on these days the Sun’s path indicates the position of the Heavenly Equator.

The circles which pass through the World’s Poles, erected vertically to the Heavenly Equator, are called Declination or Hour Circles and the planes which lie parallel to the individual parallel circles of the earth, going through the starry heaven, define on them the Parallel and Day Circles of the Stars.

It is clear that with the aid of these circles we are able to fix any position of a star, anywhere in the heaven, the same way as we fix all points on our own earth. The data necessary to accomplish this are:

1) The distance of a star E measured on the declination circle (Fig.3) from the plane of the Equator sets its Declination ED measured from angle EOD and the complementing distance to 90° of the star from the pole, its pole distance EON. But the angle, which is formed with the Plane of the Horizon and that of the Equator (in Fig.4 AQ for the point M), is called the Equatorial Altitude. This altitude is complemented to 90th by the Pole Altitude P’MH. From this follows, that the angle, made by the vertical line of a point with the Plane of the Equator MOA, must be equal to the Pole Altitude. 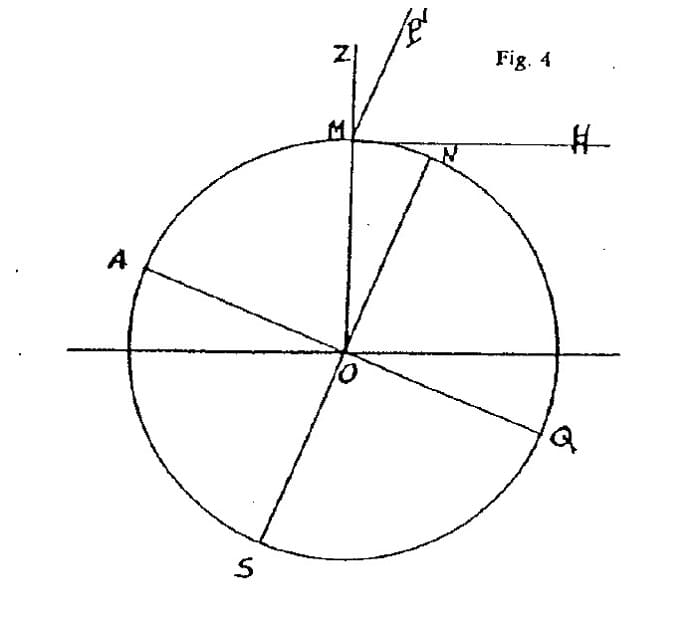 2) The distance, measured on the parallel circles of a star from the first declination circle, is called Right Ascension. The circle of declination which passes through the Spring Equinox is the first Declination Circle. From the way the place of a star is given in relation to the plane of the World Equator and the World Poles, which come to lie through the centre of the vertically lying World Axis, we can also define the place of the star in relation to the Plane of the Horizon as well as the Zenith and Nadir. They lie in the center of a line running through the former. Furthermore, we can define this star’s place through the Azimuth, i.e. the Arc of the Horizon from the South Point to the Vertical Circle of the Star, and as said already, with the aid of the Altitude, i.e. the Arc of the Vertical Circle fixed to the Horizon.

A third and similar calculation can be made in relation to the Ecliptic also called the Plane of the Sun’s Path, and its Poles.