An Introduction to the Methods of W.D Gann: Part 2 By Bryce T. Gilmore

The cycle of one year has 365 days. The circle of one year has 360 degrees. The Earth revolves around the Sun in an elliptical path moving closer to and away from the Sun during its orbit. This is the reason the days and degrees relationships speed up and slow down. To explain, there are 4 cardinal points in the circle, 90, 180, 270 and 360 degrees.

Read : An Introduction to the Methods of W.D Gann: Part 1

As the Earth moves around the Sun the daylight hours progressively get longer and shorter every six months. The shortest day of the year in the Southern hemisphere is June 21, (in the Northern hemisphere it’s the longest day), the shortest day is known as the Winter Solstice (this is 270o). The longest day of the year is December 22, 90o, the summer solstice. 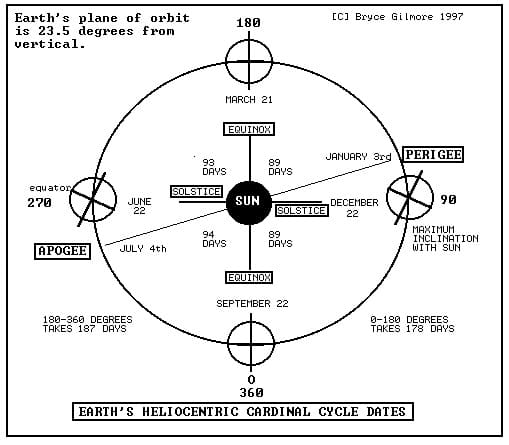 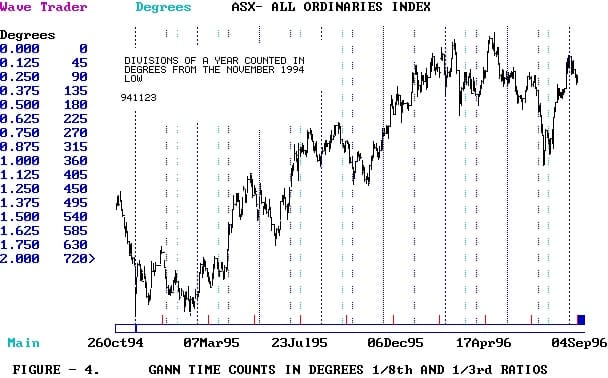 When comparing cycles it is preferable to work in degrees for greater accuracy, for this you need to use an ephemeris or a computer program, such as CycleTrader, capable of calculating degrees precisely.

Gann developed a unique method of squaring price to time and time to price. He taught that every stock or commodity maintained a vibration where there was a relationship between 1 degree of price to 1 degree of time. The difficulty with many stocks and commodities is in finding what value represents 1 degree of price. For the purposes of this demonstration I have used the All Ordinaries Index and used 1 unit of price to 1 unit of time. A market can square price to time in several different ways.

To keep a track of the position of his price to time he would draw GANN ANGLES up from lows and down from highs. He also used 4 to 1, 2 to 1, 1 to 2 and 1 to 4 angles. 1-4 means 1 unit of time to 1/4 unit of price. If you study Figure 5 carefully you will see an example of each of the methods Gann used to determine when a change in trend could eventuate. 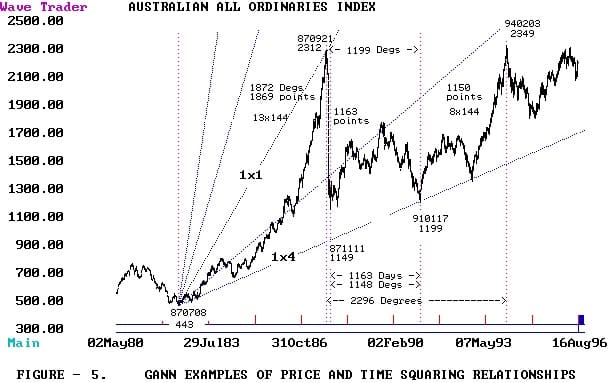 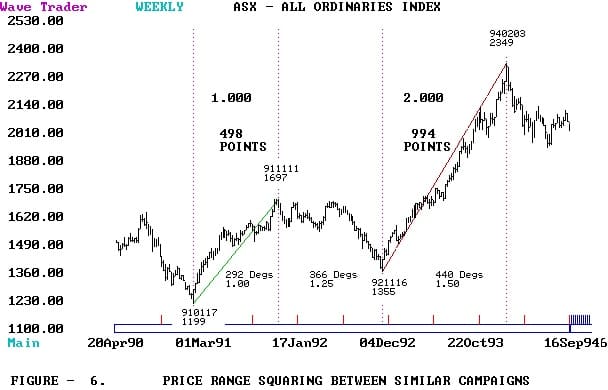 The example in Figure – 7 epitomizes everything about Gann’s knowledge of order within the market. The time by degrees in each alternate trend “squared” between extreme tops and bottoms. This example should get any trader’s or analyst’s attention. 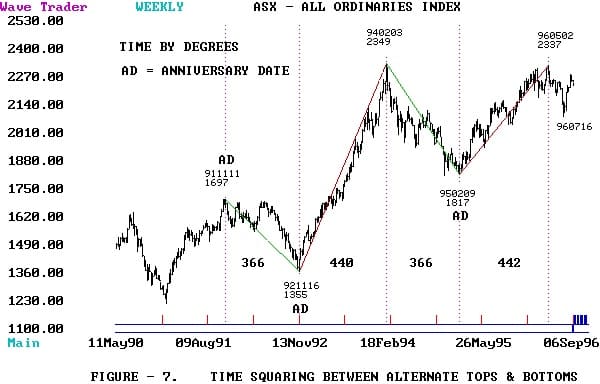 When I first read Gann’s words, “Time is the most important indicator. When time is up the market must change trend.” I crossed the threshold of market knowledge, inspired to learn more. Ever since, I have been rewarded with a knowledge allowing me the patience to wait for the major setups to trade. The principals illustrated here will work with all degree of market trends, anything from 7 days to 5 years. 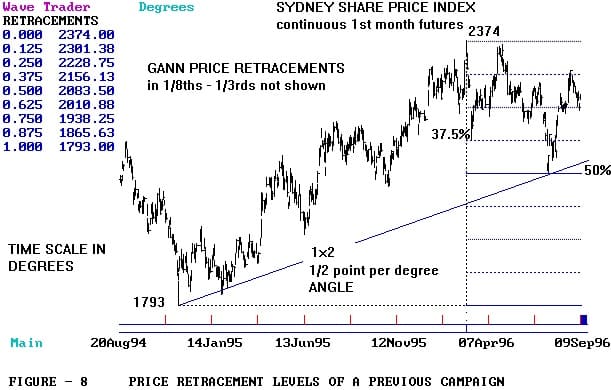 Most analysts should be familiar with price retracement levels acting as support or resistance between trends of similar degree. Gann taught his students to measure prior price ranges and divide them into 1/8ths and 1/3rds, these levels can act as support in a downtrend or resistance in an uptrend. When a market reaches these levels and reverses, all the trader has to do to verify a trend change is to look for a clustering of time cycles on that day. Gann angles also determine time & price intersections. Figure – 8 shows the recent 2086 low in the SPI on July 17 achieving an exact 50% retracement and the March 11 post election panic low at 2158 was on a 37.5% retracement. 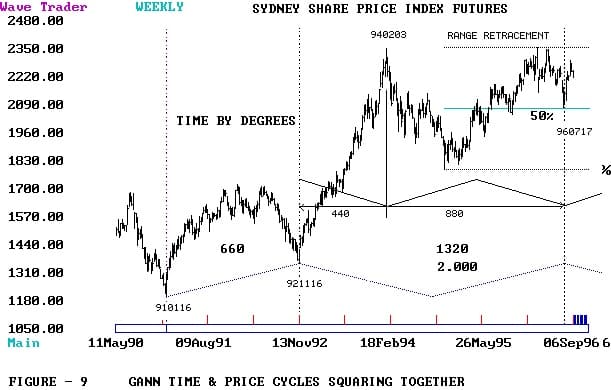 The day of 17th July 1996 when the SPI reversed trend on the 50% retracement of all the gains made between 1994 and 1996 there were several important time cycles peaking. I have shown 2, the time between the major lows in 1991 and 1992 was cycling 2.00 times and the time between the 1992 low and the 1994 high was cycling 2.00. It is quite amazing how the market continues to vibrate between highs and lows in a pure geometric form.

Most people do not realize how easy it is to identify time cycles in advance. The charts in this article were prepared using my personal WAVETRADER / CYCLETRADER SOFTWARE. I designed and programmed this software to give me the advantage I needed to beat the market. I have continually revised and upgraded my software over years of new experiences. Now in 1996 I feel I have finally produced a tool that gives me total control over my own trading destiny. Along the way I have made the software available to other traders, and have been amply rewarded from their input. I have found over the years there are a continuous number of new people entering the market and losing money, some depart, others regroup and try to learn methods that will make them successful traders.

Gann summed it up best with a set of rules to follow, his bottom line though was, “Do not trade on guesswork or gamble on hope. Knowledge brings profits. Never trade without STOP LOSS ORDERS.” I hope these brief and limited examples of technical analysis methods illustrate what is possible, if you do a little work.

Newer Dynamic Gann Levels By Don Fisher
Back to list
Older An Introduction to the Methods of W.D Gann: Part 1 By By Bryce T. Gilmore