An Introduction to the Methods of W.D Gann: Part 1 By By Bryce T. Gilmore

William Delbert Gann (or as he preferred W.D. Gann) was a pioneer in the area of time and price analysis of market activity. Born in Lufkin Texas in 1878, Gann’s basic premise was the future is just a repetition of the past and that time governed all market movements. Gann traded with and taught time and price analysis methods that could predict market highs and lows. Gann reputedly had the knowledge to forecast the price and time of the yearly high and low for commodities and stocks.

W.D. Gann, both a keen trader and a workaholic, published many books the titles were:

Gann was a prolific researcher throughout his lifetime with interests in numerology, weather forecasting and astrology. A very religious man and a 33rd degree mason, Gann claimed he learnt about forecasting price movements from the Bible. His knowledge of mathematical and astrological relationships was very advanced. He used this knowledge to formulate trading and technical analysis techniques which students could follow to identify support and resistance levels for most free trading markets.

Gann had an arsenal of price tools he taught students and it was reputed he charged $5000 for a weekend course in the early 1950’s, before his death in 1955. This article will cover many of Gann’s important time and price tools. Other tools such as The Square of Nine, Square of 144, Square of 90, Hexagon Chart and Gann’s various Master Calculators will be covered in future articles Gann’s books are required reading for any trader or analyst who wishes to understand the basic ways to view any market. The knowledge outlined in his works can easily be overlooked due to the abundance of information he presented. Just the same the pattern of information remains identical throughout all of his published work. Gann always said “History Repeats” and repetition was his way for students to get the message.

Read Book: The Law of Vibration: The Revelation of W.D Gann By Tony Plummer

Gann’s work included Money Management Rules and Trading Psychology concepts expounded by many of today’s top traders. He believed that you did not have to be in the market all the time to make money. Here are some quotes from W.D. Gann taken from his last book, How to Make Profits in Commodities. Page 11.

“TIME TO STAY OUT OF THE MARKET: This is something important for everyone to know. You cannot make money by trading in the market every day or by getting in and out every day. There comes a time when you should stay out, WATCH and WAIT until you determine a DEFINITE CHANGE IN TREND. Long periods of rest and relaxation protect your health and help your judgment which will result in profits later.”

“THE BEST WAY TO TRADE: The most money is made by swing trading, or in the long pull trades, that is following a definite trend as long as the market trend is up or down, you must learn by rules to wait until the market gets out of a rut or a trading range. Wait for a definite indication that it is going higher or lower, before you take a position for a long pull trade. Always figure that YOU CAN BE WRONG and that the market could reverse. Therefore, follow your profits up with a STOP LOSS ORDER, or get out when you get a definite indication that the market has reached a turning point and that the trend is changing.”

As a picture is worth a thousand words we will now look at some charts. Please examine each chart closely as there are some important points on them. 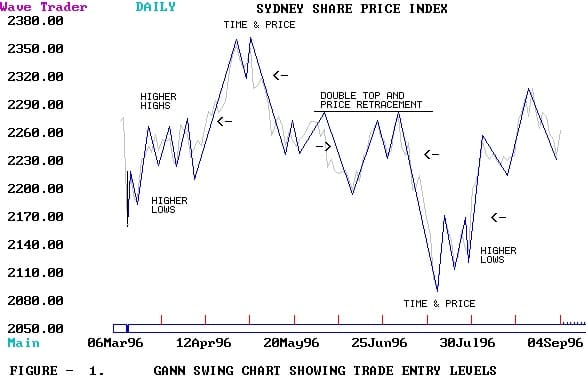 Gann’s main trading philosophy was to trade with a close stop loss and select the most opportune trades in the direction of the main trend. To confirm a trend was in progress, he would look for lower highs and higher lows to form after a major reversal in trend. The method he used to monitor trends and filter out any random market noise was the Swing Chart. Figure 1 shows an example of a Swing chart. After July 30 1996 Gann would have said the trend in the SPI was up as it was making higher lows and higher highs. Gann would be a buyer of the SPI from 2170.

Gann placed a lot of importance on the daily price patterns. He talked at length on the different types of reversal patterns you can use to identify an imbalance between supply and demand. Figure – 2 shows some of the bar chart patterns Gann looked for to confirm turning points or to get him out of trades quickly with minimal loss. 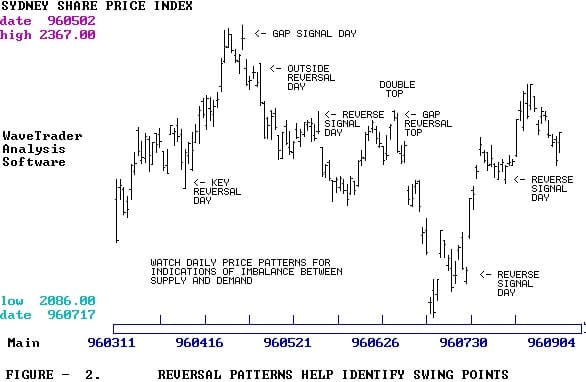 Gann taught students to face the facts and eliminate hope and fear. For instance, if a trader receives a margin call, he should close the position immediately, for the chances are he is wrong. He also taught that a successful trader studies human nature and does the opposite of what the general public does. Most traders lose money because they are too greedy, they over trade, they expect abnormal profits in normal markets.

Gann’s analysis techniques for predicting major market tops and bottoms were based on cycles. Gann believed that the future was only a repetition of the past. Gann maintained that as each new generation exerted its influence on the markets similar bull and bear markets would unfold.

Gann’s 20 year cycle relies on the fact that human nature never changes. Therefore as each new generation came to power they would behave similarly. Their inexperience in speculation would cause markets to rise and fall to prices unwarranted by supply and demand. The result is that when the BOOM is over, the young generation suffer severe losses, get some valuable experience and are not eager to try it again. To predict a top or bottom for the year Gann would look at the market activity in the years back 10, 20, 30, 40, 50, 60 and 100 years for similar conditions.

Figure -3 shows the major anniversaries in the All Ordinaries 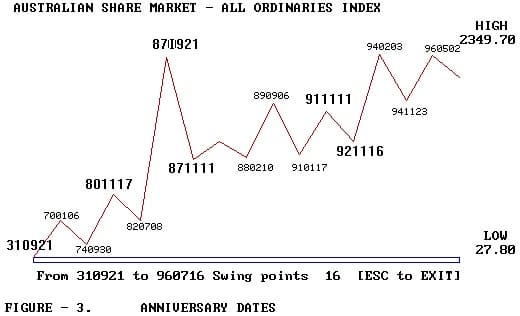 Continue Reading: An Introduction to the Methods of W.D Gann: Part 2

Newer An Introduction to the Methods of W.D Gann: Part 2 By Bryce T. Gilmore
Back to list
Older Aspects and Harmonics By Thomas Long