The Midpoint in the 2nd Square brought in a major low that resulted in a momentum move up to the top of the Square exactly at the 2/3 Time Division (96 weeks). The end of the 2nd Square of 144 arrived right on schedule on March 5, 1987 bringing with it a change of trend from up to down as prices entered the 3rd Square of 144. Although the October low just below 7500 was two weeks prior to the 1/4 timing point, prices rested that week on a Gann 1×4 geometric angle rising from the 1984 low that gave strong support to the “ﬂight to quality” powerful rally that followed. Traders using this Gann square were able to anticipate where the free fall in Tbonds would stop.

In Part I that appeared in the February 1988 issue of Gann & Elliott Wave, the 1/3 Time Division (48 weeks) was due on February 5, 1988. Gann’s principle of Balance suggested that since prices had topped at 2/3 Time Division in the previous square, that a low would be made at 1/3 in the new Square. Instead, an inversion of the Cycle occurred and a TOP was made in the forecasted time slot NOT a bottom. This “180 degree out of phase” phenomenon is not uncommon. Since the top on February 5, prices have moved lower, breaking below the 2x 1 angle rising from the October 1987 low and then breaking below that all important 45 degree or lxi angle from the same low.

Read Book: How to Profit From Applied Gann & Fibonacci

As the Master Price & Time Calculator is a forecasting tool with Time divisions as the vital key, we must look into the future to see what dates are signalled. In ranking the divisions on the Square, Gann considered the ‘End’ of the Square to be the most important. Just behind it in importance is the Midpoint or 1/2 of the Square followed by the divisions by “thirds.” The remaining Weekly Time Divisions for the 3rd Square (also very signiﬁcant) for Tbonds, are weeks ending;

The next major turning point in Tbonds is the Midpoint in week ending July 22, 1988. As the other two squares were bullish, this square in principle should be bearish, and in fact has been so. Because a high was made at the 1/3 Time Division in February 1988, the Midpoint should bring in a very signiﬁcant LOW in July 1988 that will carry prices into a strong upswing that can last into the November 1988 2/3 Time Division. 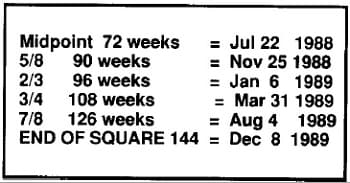 As we study the four Time Divisions that culminate in the “END OF THE SQUARE OF 144” in December 1989, we cannot know with certainty now which of the forecasted Time periods will be highs or lows. But even without that knowledge, we are able to identify a speciﬁc ﬁve day period in each quarter of 1989 that has a probability better than 80% of pointing to signiﬁcant weekly reversal turning points from the then current trends. Anyone using this Calculator since the 1981 low, knows what Gann knew 50 years ago, that his Master Price & Time Calculator bestows upon its user, powerful foreknowledge available nowhere else. And nowhere is it more evident today than in Tbonds, the most heavily traded and most important of all futures contracts.