One of W. D. Gann’s methods to determine major trend changes is the “180 Degree” or 180-calendar day trend change. 180 degrees of the cycle of a year is equal to 180 days. Gann said to watch all markets that have been up or down that period of time. Let us look at a couple of markets on this basis. The December S & P made a contract low on January 7, 1985. Gann would be watching the area of July 7, 1985 for indications of a change in trend.

The high was made on July 17, 1985 which was actually 10 calendar days off but still in the ball park. 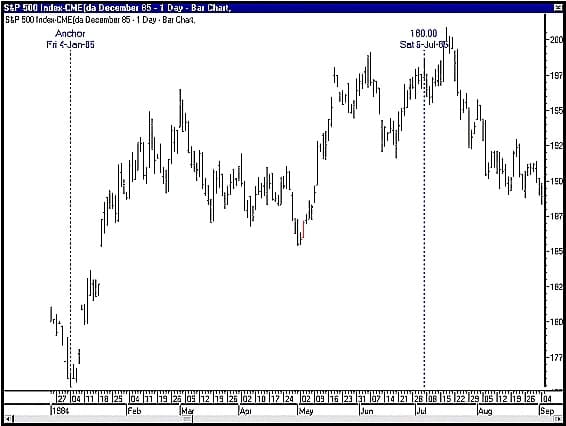 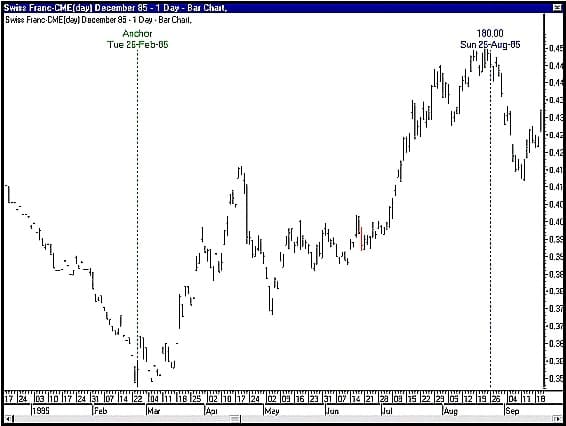 The December Deutsche Mark would also be included in this category of 180 degree or 180 day reversals. Most of the foreign currencies, with the exception of the Canadian Dollar, usually make tops and bottoms in unison. 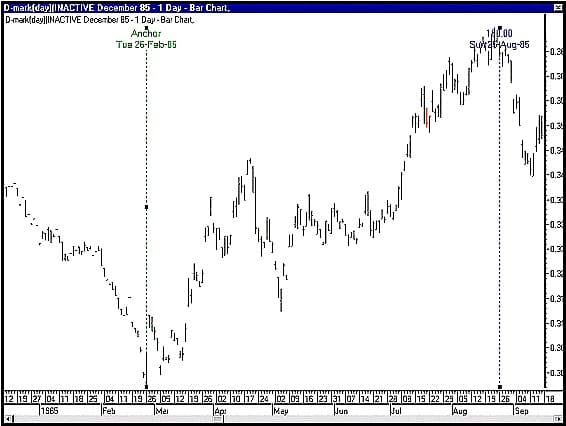 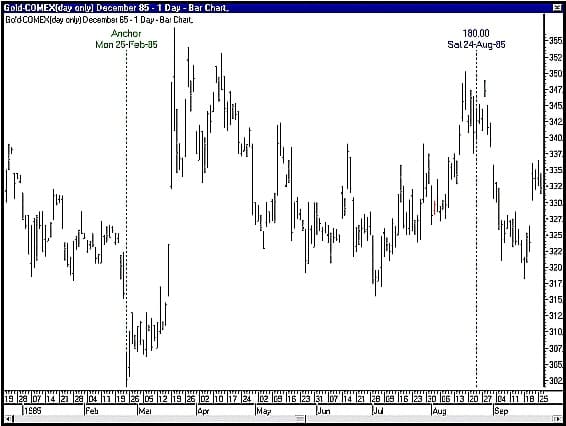 What about Orange Juice? It made a contract top on January 24, 1985. We should look for indications of a bottom six months later and a low was put in on July 31, 1985. I would watch this market for a signal that this is the bottom. (Double bottom, key reversals or taking out the swing top.)

Incidentally, we are also reaching the time of the year for Orange Juice to make its “fall or winter frost scare” which is usually the end of November. It is always a good practice to buy O.J. futures to take advantage of the weather scare. It usually comes in December, but last year the scare came in January, and was already near contract highs.

You could see a fifty point move this year. A couple of years ago this market made basically the same type of bottom formation and broke out to the upside for a 90 cent move in a very short time. The risk reward on this trade is very good. You should always watch for changes of trend at the ¼, ½ and full year. This coincides with 90 days, 180 days and one full cycle of 360 degrees or the year. September 22 will be a very strong time period this year as always. 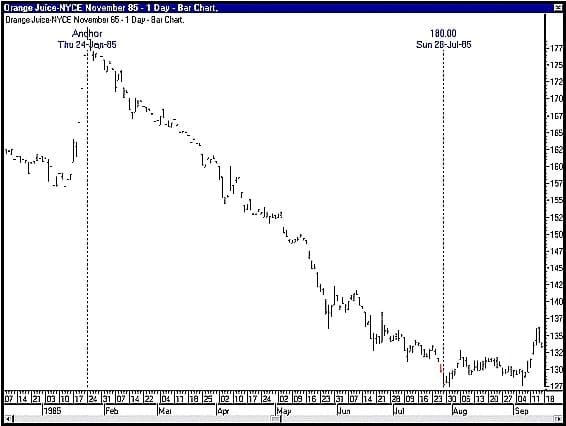 October Live Cattle have taken out their swing bottom and are pointing to lower prices. Watch the bottom of the price square for support which is in the 52.70 area and on the 45 from the top. 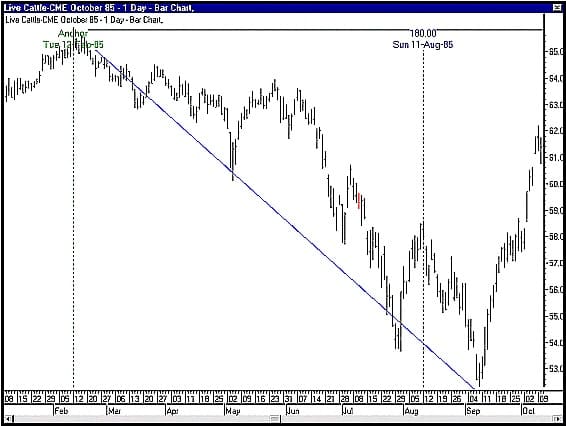 One of W. D. Gann’s methods to determine major trend changes is the ‘180 Degree’ or 180-calendar day trend change. 180 degrees of the cycle of a year is equal to 180 days. Gann said to watch all markets that have been up or down that period of time. Above the 180-degree or 180-day market moves of the S & P, the Swiss Franc, the Deutche Mark, Gold, Orange Juice and Live Cattle were illustrated. These examples were from the year 1985.

Before examining some recent examples of 180-degree or 180-day changes of trend, let us first note what Mr. Gann taught us:

The above quotation from the W.D.Gann Stock Market Course is a very powerful statement indeed. In a few brief lines W. D. Gann outlines the basis of ‘Solar Degrees’ and its link to Seasonal Time. It has even greater significance if one studies the numbers he omitted (inserted in square brackets above) and relate them to the Gann symbol. At this point you may find it beneficial to re-read Volume 1, Number 4 of The New W. D.Gann Technical Review that discusses the concept of ‘Seasonal Time’. Solar Degrees is a special case of Seasonal Time, where the starting point becomes a major high or low in the market, rather than the dates of the solstices or the equinoxes.

Days and degrees are two entirely different methods of measuring time. One day is one revolution of the earth on its axis. This is 1/365th of a calendar year. One solar degree is the time it takes for the earth to travel 1/360th of its elliptical orbit around the sun. As there are 365.24 days on one year and 360 degrees in one year, one day does not equal one degree.

In the quotation above, Gann said:

Note that he said days OR degrees. The following charts illustrating the concept of markets moving in 180-degree or 180-day moves: 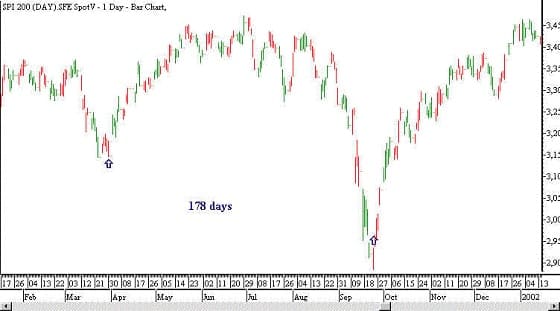 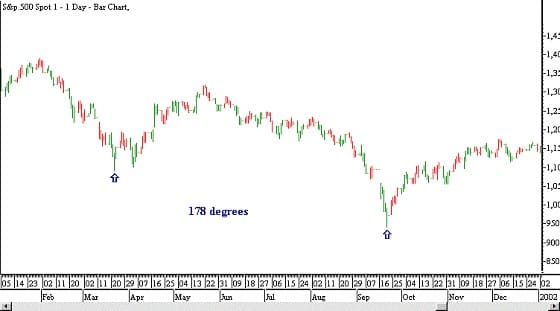 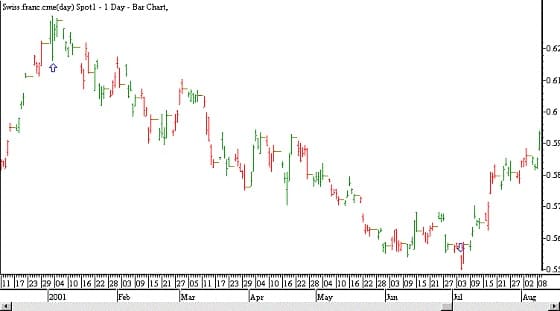 Solar degrees can be a powerful method of determining the likely dates of major and intermediate market tops and bottoms.