Managing risk and proper stop placement may be the most difficult aspects of currency trading to master. Here’s how you can use binary options to take advantage of the opportunities that volatility creates while controlling risk. Even during times of normal market conditions with fundamental announcements, surprise decisions from governments or central banks, and the overall volatility of all markets over the last year, it can be difficult to accurately gauge risk on any trade.

Take, for example, the market shock of the March 2009 Federal Open Market Committee (Fomc) announcement, when the Fomc decided to embark on a $1 trillion–plus quantitative easing program. Upon this news, the market did not just move, but gapped almost 160 pips (1.3130–1.3280) in the euro–US dollar (Eur/usd) pair! Unfortunately, this caused many currency traders, even those who had done everything technically correct by placing a stop, to lose more than they bargained for. In many cases, traders lost more than they had in their account, which left them with an outstanding debt to their brokers.

Another example of a problem that currency traders face, one that can be particularly frustrating to new traders, is just after clicking the buy/sell button, the market makes a quick 30- or 40-pip move against the position and stops you out. Then, of course, the market moves back in the original direction of your trade, which would have created profit, but that doesn’t matter because you were stopped out. This is a natural aspect in any volatile market but is frustrating nonetheless, and costly.

From Spot Forex to Binary Options

For these reasons, many traders have transitioned into the binary options market as a complement to spot forex trading activities because doing so provides them with an instrument with which they can take advantage of the opportunities that volatility creates while controlling risk.

Some people are intimidated by the term “binary options,” but there is no reason to be. Binary options are not exotic derivatives or complicated instruments, but are actually simple to understand. Binary options are considered binary because there are only two potential outcomes at the time of expiration, zero or 100. It may be easiest to think of binary options in terms of true/false statements in which if the event happens (true), the binary option settles at 100, but if it does not happen (false), it settles at zero. A binary option may be termed as: “Eur/usd to be above 1.3380 at expiration.” The price of a binary option, between zero and 100, can be viewed as the probability of that event occurring.

An important characteristic of a binary option is that a trader does not have to wait for the expiration to close out the trade. If I buy a binary option at 25 and it moves up to 60, I can close the trade out at that level for a 35-point gain. Another important benefit of trading binary options is that a trader cannot lose more than the option is purchased for. If my opinion is wrong and the market moves against me, the maximum loss I can incur is my original 25-point buy, no matter how far the underlying market may move against my position.

A few more benefits that trading binary options offers are:

Applying It To The EUR/USD

To illustrate how a binary option trading strategy may be employed, it may be a good idea to look at a real-world example in the Eur/usd from May 7, 2009. I was cautious regarding a spot forex trade because of the potential volatility surrounding a European Central Bank (Ecb) announcement and the implied risk it brought with it. However, my opinion was that market participants trading this pair had already priced in any decision by the Ecb and that the euro would rise.

In analyzing the chart in Figure 1, I was expecting to find some support around 1.3338 (marked by point A and the black line on the chart), and consequently, I had a couple of different ways to trade this pair: 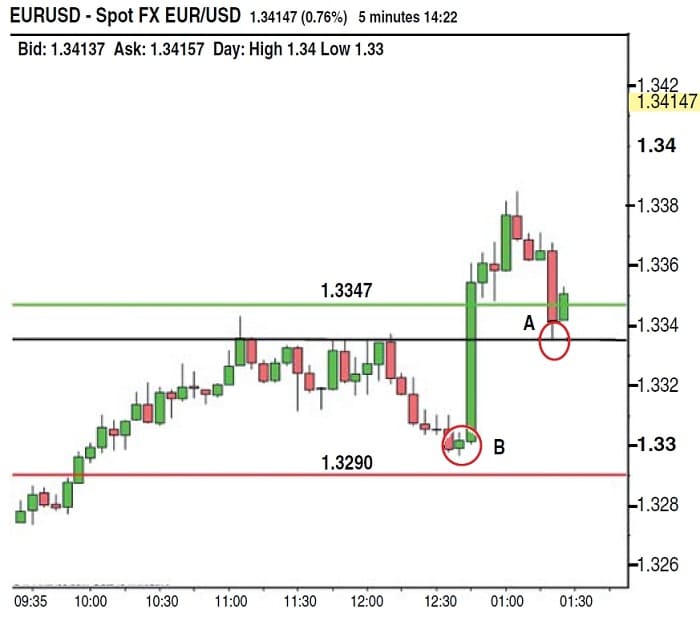 FIGURE 1: SPOT FX OR BINARY OPTION? On this ﬁve-minute chart of the EUR/USD, had you made the spot FX trade, you would have risked 57 pips or $570 on one standard contract. If you take the binary option trade, your risk would be about $310 on the equivalent of a standard FX contract.

After considering the market conditions and analyzing the risk, I chose the second option, the binary option trade, because it offered me an opportunity to take advantage of the volatility the Ecb decision would create; however, it provided me with zero risk of being stopped out on a swift move and provided security so that even if the market gapped against my position, I could only lose 31 points and not run the risk of blowing out my account. In addition, the overall risk on the binary trade was 46% less than that offered on a spot position.

Figure 2 shows that had I placed the spot forex trade, I would have been stopped out in a matter of minutes because of the spike down in the market. Because I chose the binary option trade, I did not have to worry about a stop and gave myself the opportunity for the market to move in my direction. To get a sense of how the binary price worked on this trade, I noted various price levels with the sell/buy price for this binary option on the Eur/usd to be greater than 1.3390. 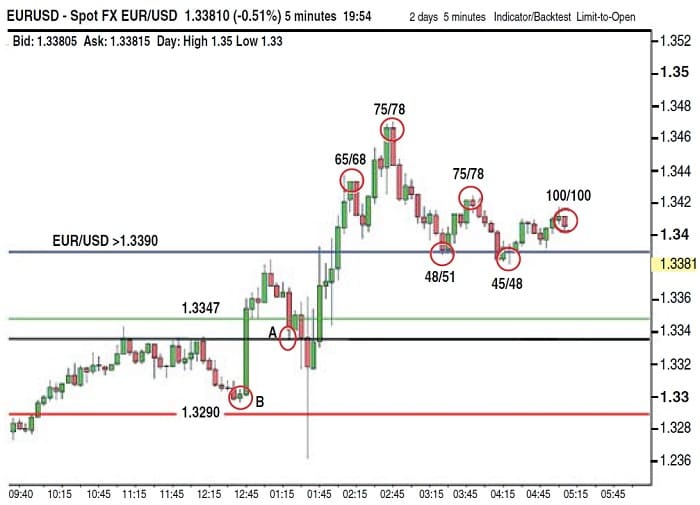 FIGURE 2: BINARY OPTION TRADING STRATEGY IN ACTION. If you had placed the FX spot trade, you would have been stopped out in a matter of minutes. If you chose the binary option trade you would not have had to worry about a stop since a stop is automatically built into a binary by the boundaries of zero and 100.

Even if I had sold out of this binary trade at the extreme low point on the spike down, I would have only lost 13 points, which represents the difference between my buy at 31 and sell at 18. Because of the time remaining until expiration, this option still had value. In addition, the chart in Figure 2 shows there are two points in which this binary was priced at 75/78, even though the first point has a much higher underlying price.

This may seem confusing, but the answer is pretty straightforward; the price is essentially reflecting a probability of an event happening. The first price was much higher, but there was still a great deal of time for the market to turn against this position. The second price was much closer to the strike, but because there was less time for the market to move adversely, the probability was just as great that the binary would close above the strike price as it was at the previous peak. At expiration, this binary closed at 100/100.

In the spot market, I would have been stopped out with a loss of $570 on a trade lasting only minutes. But with the binary, even if I had closed out at the worst possible point, I would have only lost 13 points or $130. If I had held the binary to expiration, I would have received a profit of 69 points (the difference between the buy order at 31 and the settlement at 100) or $690. As it happened, I sold out of this trade when the market turned back from its high and sold at 73 for a 42-point profit.

Binary options provide traders with an opportunity to participate in a volatile market while managing their risk to a greater degree than offered through a traditional spot trade. As trader Amos Hostetter once said, “Take care of your losses and the profits take care of themselves.”

Binary options are priced for many different markets including equity indexes, commodities and, as this article has illustrated, foreign exchange. Binary options can be traded on exchange through both the North American Derivatives Exchange (NadEx) and the Chicago Board Options Exchange (cboE). The cboE is registered with the sEc and NadEx is registered with the cFtc.

Dan Cook is senior market analyst. He focuses on both the fundamental and technical side of the equity, currency, and commodity markets. With 10 years of experience in the financial markets, he helps his clients understand the current events that are driving the markets so that they can plan their trading activity.

Share this article with your friends:
Newer Working Money The Stepchild of Chart Patterns By Kenny Gilliland
Back to list
Older Pump Up The Volume By Todd Krueger