It is well known that as soon as the markets open, there’s a significant amount of trading activity, much of which is strong breakout patterns. How do you identify which of these patterns are strong enough to continue and generate successful trades? Find out here. Many of the strongest breakout trade entries can be found using specific chart patterns that you can see during the first hour of each trading day. When you’re looking for successful breakout trades, it helps to visually scan for these technical trade setups during the market open for potential swing and intraday trades. One reason these patterns work so well is because institutional traders enter high-volume “market on open” client orders during the first few minutes of each trading session, which leads to rapid breakouts that you can capitalize on. Since your goal is to avoid false breakouts and instead enter trades that keep going in your favor, your ability to spot these useful technical momentum patterns is a valuable strategy. In this article, I’ll show you top first-hour breakout patterns to be on the lookout for when entering your trades.

The first strong pattern to look for is to see how tall the first five-minute candle is in the stock or exchange traded fund (ETF) you’re considering for a trade entry. Ideally, this opening-range candle, formed from 9:30 am to 9:35 am Eastern time, has a height of at least 30 cents or better for stocks in the $20–70/share range. You can see this pattern illustrated in the five-minute chart of Sina.com (SINA) in Figure 1. The first five-minute candle was well over 30 cents tall (from $37.85–$38.70), leading to a subsequent breakout that went up over an additional point to a day’s high of $40.45. The first tall candle you see is a signal that traders were enthusiastically buying during the open, while additional buyers then lifted the price higher in the hours that followed. 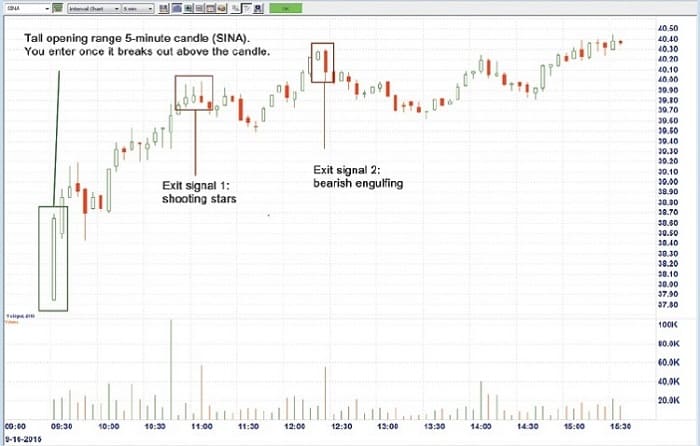 The step-by-step trading strategy is to visually scan for five-minute charts that are trading above the prior day’s high, and that have an opening five-minute candle of greater than 30 cents. If these conditions are met, then you enter just above the high of this five-minute “opening range” breakout candle. Stops are placed under the initial five-minute candle low. For trailing stops to exit your trade, use bearish candle reversal signals such as shooting stars and/or bearish engulfing patterns. It’s often smart to scale out of half the trade on loss of support of the first reversal (such as at $39.70 below the shooting stars in Figure 1), and the remaining shares under the second reversal ($39.90 below the bearish engulfing pattern).

A common error that retail traders make is to avoid entering after strong initial moves (or opening gaps, as discussed in one of my earlier articles, “Gap Continuation Breakouts”). This is out of misplaced concern that a chart that has just shown strong buying is exhausted and unlikely to continue with upward price action for long breakouts. In fact, a core professional swing and intraday trading strategy you can use is to enter new trades just above prior resistance levels on the strongest breakout charts, because (with rare exception) they are most likely to continue, as you can see in Figure 1. An inexperienced trader following this chart live would have likely mistakenly thought the high of the first candle, at $38.70, to be overbought and missed out on the larger, nearly two-point breakout move that followed.

Successful breakout trading is focused on entering price-action moves above prior high resistance areas in the unseen “upper right” area of where a strong chart will move. Many technical traders struggle with this because “buying high, selling higher” isn’t as appealing as buying a dip or a potential reversal. If you go back and review your personal profits & losses (P&Ls), your wins versus stops, you may well find, however, that you have a higher percentage of losing pivot-attempt trades (trying to outguess the market) compared to breakouts. This “buy it on sale” department store mentality leads traders to mistakenly buy weak stocks in a downtrend, which usually continue downward. You may find that a buy high, sell higher professional breakout entry approach helps you make better trades.

Another strong first-hour breakout pattern is to enter a long trade following three green candles, as seen in the five-minute chart of Apache Corp. (APA) in Figure 2.You can also see that the volume bars are increasing inheight for this set of three candles, indicating increasing buying momentum. Although the candle following these three is a bearish shooting star, price subsequently went up from $41.90 to $43.10, which is a full one-point intraday breakout. 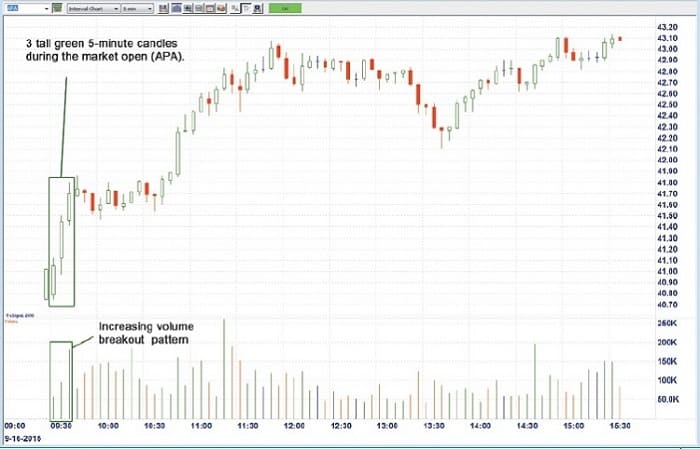 This is an effective second pattern you can visually scan for, in case you miss the initial 30-cent opening candle pattern discussed earlier. In this type of strong breakout chart, you see not just one but three sequential tall momentum candles, each of which is at least 30 cents in height. You wouldn’t use 30-cent candles on expensive stock charts like those of Apple (AAPL) or Netflix (NFLX); you would need to use values larger than 30 cents due to the higher price and larger, potentially riskier wide trading ranges. It is best if you focus on using this strategy with stocks and exchange traded funds (ETFs) in the preferred $20–70/share range.

It often helps if you put price action in perspective by looking at three-day charts, especially when swing trading. This will be useful so that you can see average daily volume, trading ranges, and breakout patterns that are unique to the stock that you are considering trading. In the one-minute chart of Alibaba Group Holding Ltd. (BABA) in Figure 3, you can see that buying above each prior day’s high would result in winning trades, on September 15, 2015 and September 16, 2015. You will also see that price action on September 15, 2015 formed a classic bullish ascending triangle, leading to a large breakout on the following day. 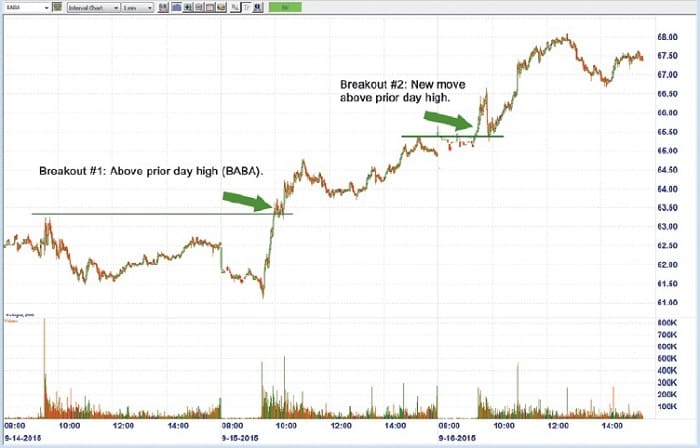 FIGURE 3: MULTIDAY BREAKOUT CONTINUATION. Strong breakout charts will often continue in-trend for several days in a row such as in this intraday chart of Alibaba Group Holding Ltd. (BABA).

If you combine the strongest confirmation signals such as multiday highs, tall opening candles, and large volume you’ll be well on your way to developing an effective personal breakout entry strategy. In working with hundreds of traders in live seminar appearances, I have found the biggest breakout error comes from traders overtrading choppy charts. It’s important that you narrow your watchlist to exceptionally strong outlier charts and patiently wait and selectively trade only the strongest few charts available.

Much like hiring employees, inexperienced managers fail to see “red flags” and make hiring errors; similarly, as a trader you should seek to profit from the rare high-performance breakout charts using these specific criteria to focus your efforts. For example, in Figure 3, BABA is in a multiday uptrend with an average daily trading range of two to four points with a clear, easy-to-follow price-action chart.

Institutional traders enter high volume “market on open” client orders during the ﬁrst few minutes of each trading session, which leads to rapid breakouts that you can capitalize on.

You can see a useful “breakout recovery” opening pattern in the chart of Range Resources Corp. (RRC) in Figure 4 in which long price action overcame the initial bearish shooting star. This opening cup breakout pattern is helpful when you are looking for breakouts that occur between 10:00 am and 11:00 am Eastern time, after the initial wave of the 9:30–10 am breakouts. 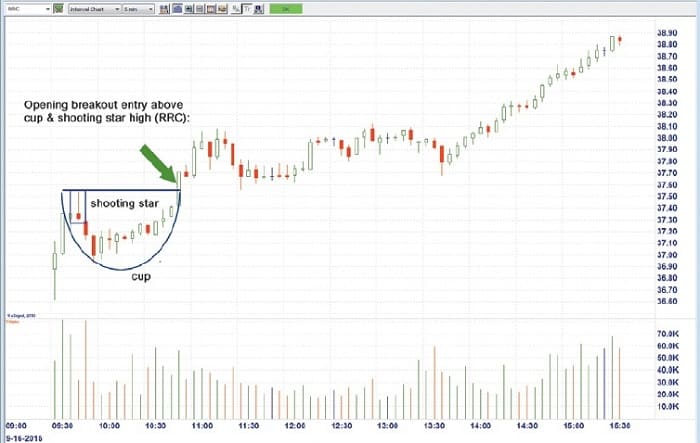 Whenever initial bearish signals, such as shooting stars, are overpowered by buying during the early part of the day, they often provide exceptionally strong breakout entries. You’ll also note that the early resistance level of $37.55 subsequently became support in this chart, which continued up into the day’s close. This change in price action from short to long is also supported by having a tall 30-cent candle occurring on the right side of the cup from 37.40 to 37.70 in Figure 4. These 30-cent candles can also help you filter out false breakouts, because a tall green candle with this much strength provides a visual clue as to upcoming buying pressure for a new breakout entry.

In looking at all four chart examples, you’ll see they all have sustained, strong breakout price momentum patterns in common. Much like being a detective, studying these patterns can reveal valuable trading clues, if you know what to look for.  They are not uncertain, weak charts with unstable momentum; instead, they all show you strong entry patterns you can look for whenever you visually scan through charts for trading. When you’re considering entering a new position during the early part of the trading day, it’s smart to look for breakout confirmations using one or more of these specific chart patterns. If you don’t visually see one of these four primary patterns in a chart you’re considering, it may be wise to avoid trading until you do see one of these technical patterns start to emerge.

One key to successfully trading breakouts is that there’s a big difference between simply buying a new high (which often fails) and buying at a breakout high entry price that’s strong enough to attract new buyers after you get into your trade. The patterns I’ve discussed in this article are designed to help you accomplish that goal. Using these experienced traders’ opening breakout patterns can help you find some of the strongest charts for day and swing trading.

Ken Calhoun is a producer of multiple trading courses, live seminars, and video-based training systems for active traders. He is a UCLA alumnus and is the founder of TradeMastery. com, an online educational site for day and swing traders.