The End of the Fifth Wave By Dan Akin Dimock

Perhaps, but although it might increase the number of winning trades, the average proﬁtability of each could suffer. Also, much more is involved than just looking for ﬁve waves. To illustrate, let me give you a “pop quiz,” asking you to solve one of the problems I present to my students. If according to the corresponding pattern involved, one could know which Elliott movements would end in three waves and which would end in ﬁve, could outstanding results be achieved? Is such knowledge all that is really necessary in order to earn a proﬁt? Let’s talk about it.

Elliotticians recognize that wave sequences of the same degree numerically alternate in the sense that threes follow ﬁves and ﬁves follow threes, and that the one exception to this alternation occurs only within counter-trend movements, where threes as well as ﬁves can follow threes. But the ﬁnal wave of any corrective pattern (other than triangular) will always subdivide into ﬁve waves rather than three. Obviously, we can’t know for certain whether a movement is going to actually develop into three or ﬁve waves until the fact occurs. We can only anticipate the event through the implied forecast of the previous pattern. But because ﬁve is the maximum number of subdivided waves of the same degree that may occur within any wave, it makes our trading a lot safer by waiting to enter a position at the end of that number. And because most corrections end with ﬁve subdivided waves rather than three, which works to our advantage, we are able to enter our trading positions with far less risk in order to capture most of the profitable primary movement that follows.

But suppose a trade is entered upon the completion of a ﬁve wave movement which is assumed to be wave (please refer to ﬁgure 1), with the expectation of proﬁting from an immediate change in trend to the opposite direction, which does occur. To monitor this new movement we use the knowledge that all odd numbered (main trend) waves always subdivide into ﬁve smaller waves, as would be the case if wave 1 of the larger ﬁve wave primary trend followed our entry. But instead, the wave we have entered subdivides into only three lesser waves. It is then followed by an abrupt reversal which quickly eliminates all proﬁts. One way to address this would be to never hold a proﬁtable position beyond the conclusion of three waves of the same degree as the ﬁve waves that preceded them. 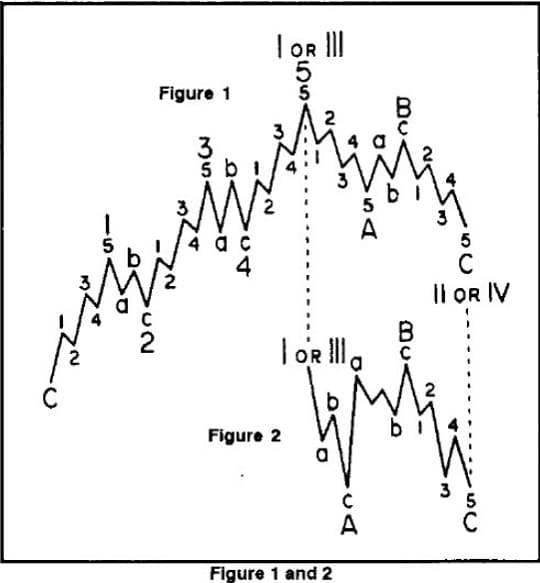 Conversely, suppose a market is expected to end on three waves (which it does, temporarily). But at this point the three waves are incorrectly interpreted to be the three waves of a corrective A-B-C (5-3-5) zigzag pattern. Because of this mistake the trader assumes the corrective phase is over and therefore takes a position in the opposite direction. But after a pull-back, the market then resumes its trend to complete a ﬁve wave movement (5-3-5/3-5) against the newly established position. One way to deal with this, other than by using stops is to rely on the Principle’s “guarantee” (as I interpret it, but some would disagree) that no movement will fail to develop in less than three waves. By this, the trader can wait for the market to retrace, in three waves, back toward the point of entry where a less damaging (or a break even) point of exit may be taken. What do these examples teach us? To never enter a position at the end of three waves? Or to never hold a position beyond the conclusion of three waves?

Consider: The market has just completed ﬁve waves. Are we immediately headed into a correction, or has one just ended? Look again at ﬁgure 1, but no fair peaking at the answer. Does the big picture that immediately comes to mind speak so loudly that it’s difﬁcult to hear what is being asked? Did your ﬁrst thought tell you one thing, because that’s what it appeared to be; your applied understanding yet another, because you looked deeper? Did Elliott write it, or, are you (like me) so accustomed to seeing, and therefore visualizing the ﬁve impulse waves of the familiar lightning bolt that is used to properly illustrate his writings, that it tends to override his written explanation of the Principle?

Now for the answer to the ﬁve wave question. Did you answer yes, no or maybe? Either answer could be correct, depending on the ﬁve wave pattern involved. They don’t all indicate the same outcome, therefore more information is required. Of the six possible patterns, ﬁve may be seen in ﬁgure 1, and one in ﬁgure 2 (incidentally, it was a trick question, let’s refer back to it now). The question requires another question. Which wave containing ﬁve waves has the market just completed? By knowing which ﬁve wave movement is currently ending, we can know what the next wave will likely be (implying where the market is headed, relative to where it is) and thus how, or even whether, to trade it.

And so we see that more information is needed than just the number of waves in order to make intelligent trading decisions. For instance, wave formations have special identiﬁable characteristics which exist only in certain patterns. The skill to recognize these must be developed. In knowing which of these formations are indigenous to which patterns for their correct interpretation, the serious Elliott Wave student can substantially reduce the number of surprise occurrences that plague the unprepared trader. Identifying characteristics uniquely individual to each wave, and noted how various waves would only interlock with certain others just as with separate.

Through association, he or she can know how to reasonably forecast in the earlier stages what each completed pattern will likely be (whether three or ﬁve waves), before the “guaranteed” third wave (and occasionally the ﬁrst) of that pattern has ended. The experienced Elliott analyst can then more frequently anticipate, and take defensive measures against many unwelcome events. This is where the pay off can come in the form of much higher proﬁts from winning trades and less draw-down in the fewer losing ones.

In reality, we know that these various patterns (which develop from the price activity reﬂected on bar charts) do not develop independently of, but rather because of and in harmony with the other market conditions. That’s what makes the Elliott Wave Principle the valuable gauge that it is; collectively reading and inputting these combined conditions into one visible overall pattern out of the many possibilities that could develop. And by progressively narrowing its options in reaction to the trading in mass, will settle on a single identiﬁable pattern which alludes to the precise beginnings of the next market reversal.

As Frost and Prechter observed, “If you keep an hourly chart, the ﬁfth of the ﬁfth of the ﬁfth (wave) in a primary trend brings you within hours of a change of direction in the market. It is a thrilling experience to pinpoint a turn, but never get hooked on the Principle so deeply that you refuse to recognize other technical tools.”~2~ And R.N. Elliott made this comment about his ﬁndings, “Investment markets themselves progressively foretell their own future.” He went on to explain, “Waves indicate the next movement of the market by their patterns whose beginnings and endings are susceptible to deﬁnite and conclusive analysis. (3)

Please read Elliott’s statement again, and note particularly the words deﬁnite and conclusive. Unhedged words from an accountant who spent the better part of his life in a profession requiring the utmost in accuracy to describe that the markets are saying, ﬁrst hand, what they are going to do next. What Elliott had uncovered was the language, a visual language of patterns, which the markets use to communicate how many waves a current movement, and the next, will sustain, and in which direction. But that language must be correctly interpreted in order to provide value to you and me. So Elliott isolated and labeled each wave, making correct interpretations possible. He observed special pieces to a puzzle. He found these interrelated waves would then develop into repeating and therefore recognizable patterns that would connect to and imply what form the next pattern would commonly assume and in what conﬁguration it would normally end, with no gaps occurring throughout the entire process.

To the best of my knowledge, this unbroken chain of interrelated patterns has not failed to appear on any day in any market during the approximate 55 year span that ﬁrst of all Elliott, then his personally trained and licensed students, and then those that were to follow after, began applying his discovery to the markets (incidental, for those Fibonacci readers, The Wave Principle was written 34 years into this century, parts of which we are now discussing 55 years later, 89 years into the century).

Newer The Chain of Command By Robert Krausz
Back to list
Older Gann’s Time, Price and Pattern Factors By Robert Miner