Swing Trading With Momentum On Your Side By Ken Calhoun

Seeing a simple breakout may convince you to place a trade, but how do you know if a breakout is really a breakout? Here’s one way you can jump into a trade and not get caught off-guard. Developing a consistent approach to identifying and trading breakouts that continue in an uptrend after a trade has been placed is a common challenge faced by active traders. Traders may often enter a position based on a simple breakout above new highs, which subsequently consolidates or pulls back, causing stop losses. Trading breakouts based on simple price action or candlestick patterns alone runs the risk of buying near a pivot or exhaustion area. Similarly, relying too heavily on complex lagging indicators like moving average convergence/divergence (MACD) crossovers, relative strength index (RSI), or stochastics can generate false positive entry signals and lead to overtrading weak signals.

A simple, strong breakout pattern is found whenever a wide-range candle occurs at the rightmost side of a bullish cup pattern. A “wide range” is defined as one in which the height of the candle is at least twice the height of the prior two daily candles. For example, in the 90-day daily chart of Tesla Motors, Inc. (TSLA) in Figure 1, you can see that on July 16, 2014 and August 7, 2014, the wide-range candle at the right side of each bullish cup pattern led to more than a week of subsequent new-high breakout price action. 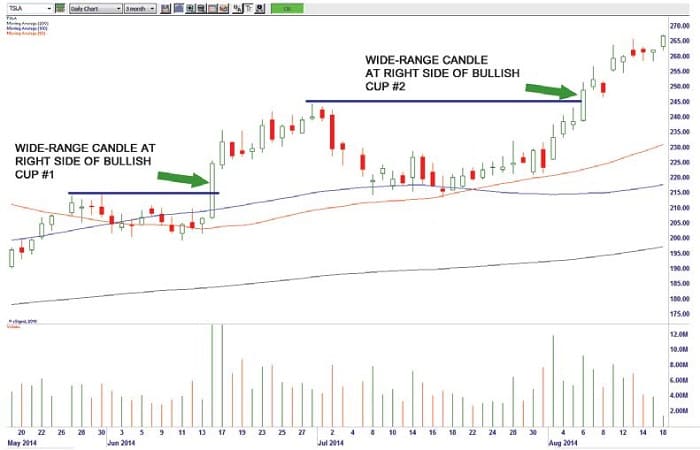 These wide-range candle days often attract new institutional money flow, as seen by the taller volume bars on each of those days. An astute swing trader will wait until the day following one of these high-volume wide-range candle days to enter a new trade. A visual scanning process includes looking through 90-day daily candlestick charts to identify those charts in a reasonably strong uptrend that show this pattern, and developing a trading plan to initiate new entries above the highs of these wide-range candles.

Get Stock Patterns for DayTrading Course By Barry Rudd

On a 90-day candlestick chart, the visual pattern of increasing candle heights shows increasing ATRs. Spotting emerging new momentum breakout volatility therefore becomes a matter of simply looking for taller candles above key support/resistance areas (like the bullish cup highs I mentioned earlier). Rather than depending on a derived ATR pattern, it becomes easier to spot breakouts by looking at increasing candle heights (daily trading ranges), over several days’ time.

On a 90-day daily chart, one pattern to look for is a series of three decreasing versus increasing candle heights. These will visually show ATR patterns. An example of both of these is illustrated in the 90-day daily chart of Bituato Holdings Ltd. (BITA) in Figure 2. Similar to a classic threeline break (exhaustion) pattern, three decreasing-height candles leads to consolidation or reversal of price action. In contrast, when there’re three increasing candles, this momentum of taller candles often leads to a breakout continuation. 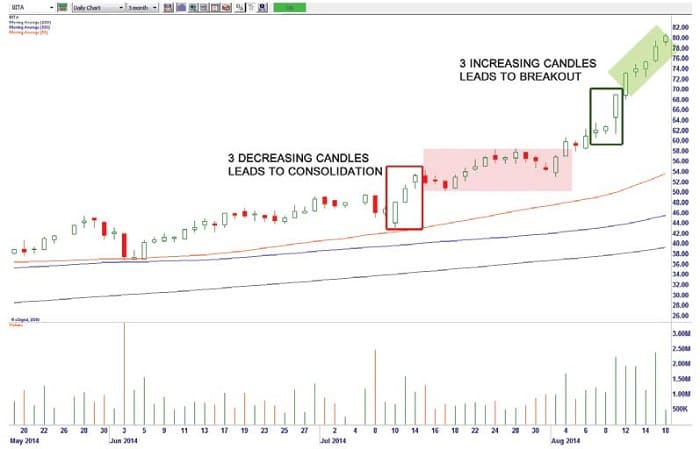 A common trading myth is that gaps often fill, and that buying new gap highs is risky. Nothing could be further from the truth; in fact, gaps often con-tinue in-trend when-ever characterized by high volume on the gap day and a wide-range candle. In the chart of US Steel (X) in Figure 3, this technical pattern is easily confirmed. Price action gapped from 28 to 32 and sub-sequently continued up an additional five points in the two weeks following the gap. 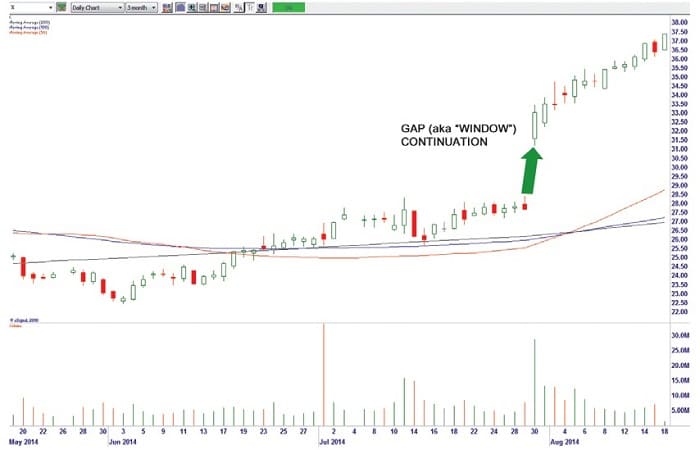 FIGURE 3: GAP CONTINUATION ENTRIES. Gaps often continue in the direction of the gap, especially when the gap day has a wide-range high volume breakout candle pattern like in this chart.

Gaps — or windows in candlestick terminology — often occur after earnings releases or following a news release that impacts the price of the stock. A technical entry pattern confirmation is found when price action takes out new highs during the two to three days following the gap day.

It’s often wise to avoid entering on the day of the gap, unless you are daytrading, because gaps will often have a resting or low-volatility day or two following the gap. In the chart of Noodles & Co. (NDLS) in Figure 4, this is seen on the two days following the gap down: August 17 and August 18, 2014. In this chart, no short entry would be indicated unless price action loses the three-day support at 19.50. By waiting to confirm an entry on a technical confirmation signal like this following a gap, you can avoid the uncertainty that occurs during the immediate day or two following a gap chart. 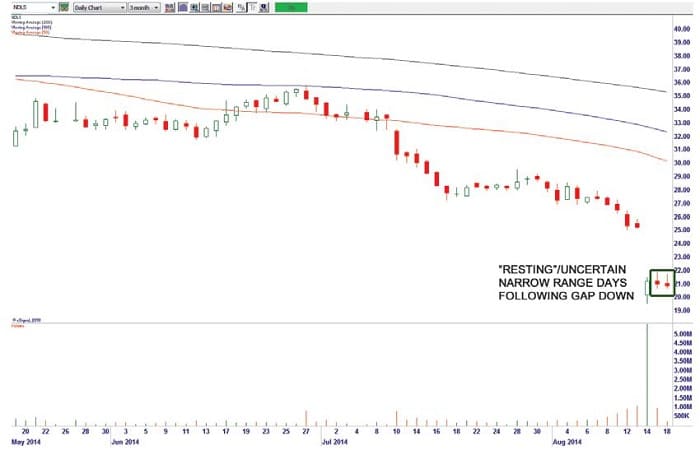 Once in a winning long gap continuation trade, it becomes important to identify signals that indicate a slowing of breakout momentum. The two most important, as always, are price action and volume. In the chart of Canadian Solar Inc. (CSIQ) in Figure 5, there’re two warning signs, indicating that if you had bought the initial gap up, you should now be looking to tighten in trailing stops to protect your profit. 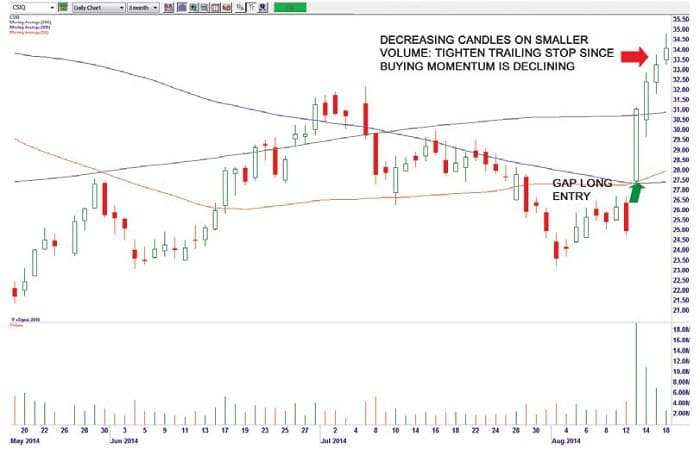 FIGURE 5: EXITING AFTER WINNING GAP TRADES. Once entered, it’s important to look for clues that breakout momentum may be declining, such as a series of decreasing candles on lighter volume.

The first signal is the decreasing candle heights during the most recent three trading days. The candles are getting progressively smaller, indicating a slowdown in buying momentum. The second warning sign is the decreasing volume bars, which indicates that buying momentum is slowing down as well. So it’s a smart time to start closing out the trade with tight trailing stops. 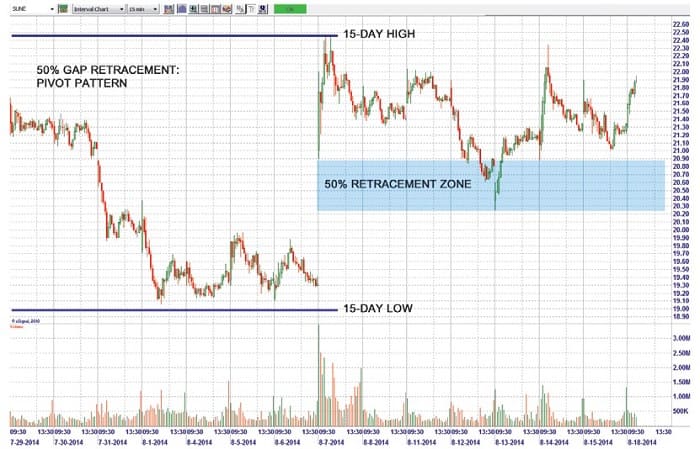 FIGURE 6: RETRACEMENT FOLLOWING GAPS. Following gaps that ﬁll, price action will often retrace to near a 50% zone and then resume the initial direction of the gap.

If you look for these types of pivot zones, you can use a position-sizing approach where you would enter a small position once price action makes its initial pivot, followed by a secondary scale-in entry to add to the initial position once price action has taken out new 15-day highs, above the gap high. In this case, that would mean an initial entry in the 20.30–20.90 region, and a second entry above 22.60 for a scaled-in continuation breakout trade.

As has been the case in the S&P 500 index during 2013–14, price action will occasionally find support at the 50-, 100- and/or 200-day simple moving average (SMA) support areas on a 90-day daily candlestick chart. Looking for classic candlestick hammer patterns at these major moving average areas can help you identify likely pivot points to use for your trade entries. You would enter your trades above these pivot points. In the example of the chart of Southwest Airlines (LUV) in Figure 7, classic daily hammers are found at the 50-day SMA lines, indicating long entries could be entered above the high of each hammer. 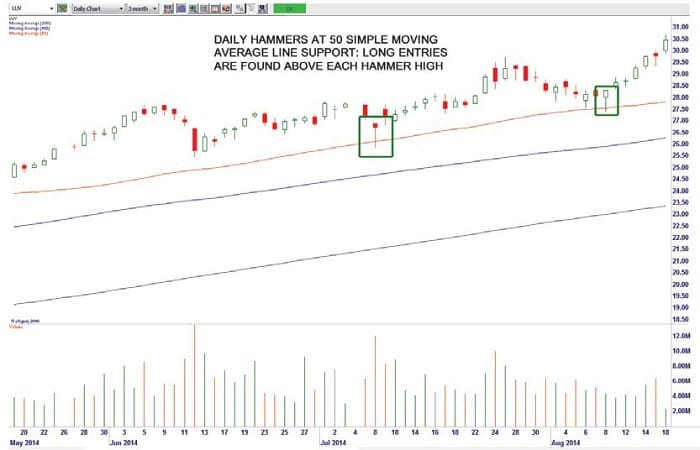 FIGURE 7: HAMMERS AND MOVING AVERAGES. Pivot entries can be found following hammers that rest on a 50-, 100-, or 200-period simple moving average line.

As a general guideline, it’s best to enter above daily hammers on 90-day candlestick charts that find support at the 50-day SMA (as opposed to the 100- or 200-day SMA), since price pullbacks and selling pressure are less at the nearer 50-day SMA signal. When selling pressure has taken price action all the way down to the 100- or even 200-day SMA, there’s less strength for long trades indicated. While still viable, they should be entered more cautiously than with hammers that pivot early, off of the 50-day SMA as seen in Figure 7.

After making thousands of real-money trades, I have found during the last 15 years of trading that a key to success is to focus on the simplest, strongest, and most obvious breakouts. Steady continuous uptrends, punctuated by occasional bullish gaps and/or wide-range high-volume candle days, are much better because they are the charts that best attract new money flow from institutional technical traders and astute home retail traders.

Developing a personal action plan can be as simple or complex as meets the needs of the individual trader. It helps to troubleshoot problem charts and failed trades by looking at which charts led to wins versus stops, and key differences between them. Keeping a traditional trading journal is often a useless exercise because traders don’t specify the exact technical entry signals used to enter a trade, nor the profit & loss (P&L) trade-management process used to produce wins versus stops. A technical trading journal that combines the best of the momentum breakout entry signals along with profit & loss per trade can be a much more effective strategy.

Keeping technical analysis simple yet consistent is the hallmark of a good trader. Looking for the story of net buying vs. selling pressure with the help of candle heights (combined with traditional Western technical signals like volume, cups, and gap patterns) can provide a potentially successful trading approach for savvy technical traders.

Ken Calhoun produces trading courses, live seminars, and video-based training systems for active traders. A UCLA alumnus, he is the founder of DaytradingUniversity.com, an online educational site for day and swing traders.