The square of nine popularized by W. D. Gann is very reliable in determining market trends. It is a useful market tool in almost all markets including stock indexes, stocks, commodities, and options. The numbers in the square of nine can be used as price levels of support and resistance, and most importantly as time units. These numbers can be used to count minutes, hours, market days, calendar days, weeks, months, and years. 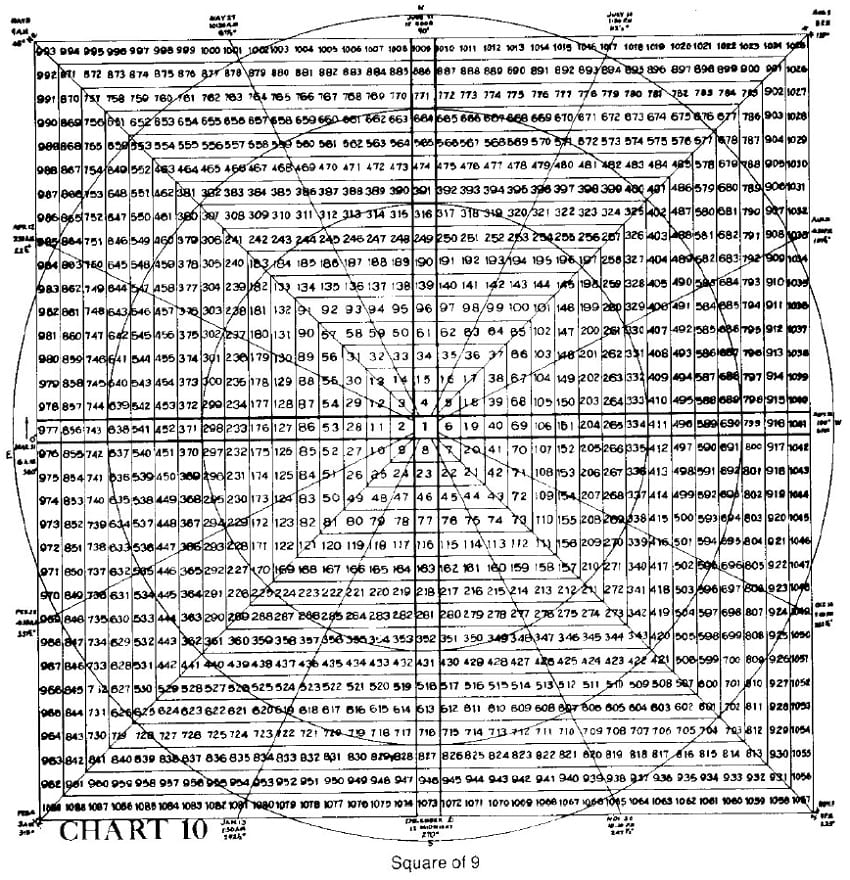 First some rules and guide lines are in order here. Rule one is when the market has reached a high or low on a particular angle, then expect another high or low on the same angle in the next cycle. The next cycle is a continuation of the spiral of numbers around the circle, until they reach the same angle. As you can see in our illustration of the square of nine, the numbers 9, 25, 49, 81, etc all are at the end of each spiral therefore ending each cycle. An example would be if the market made a low on the 28th day in cycle 3 on the 0 degree angle of the square of nine, you would look for another low at 53 days on the 0 degree angle in cycle 4.

Rule three is the fact that at times you will be what I call psychological inversions. You will be expecting a low, as predicted on a particular angle in the last cycle, but instead on the same angle in this cycle you get a high, what you do here is invert or reverse all the highs and lows from the last cycle. If you had a low often 28 days of cycle 3 and a high at 40 days on cycle 3. but on the 0 degree angle of cycle 4 the market makes a high instead of a low then expect the market trend to be reversed. You should now expect a market low on the 180 degree angle in cycle 4, just the reverse of cycle 3 on the 180 degree angle where the market topped out. When the market reverses again, reverse the cycles back to their former pattern. In overcoming this aspect of the square of nine in trading its fairly simple to just watch the trend between the angles. IF the market action is the opposite from what it was doing in the prior cycle, the trend may be reversing.

The ﬁrst date we’ll be calculating is April 10th, 1987 which is 1702 days from August 2, 1982. This date is on the 0 degree angle in cycle 211. To determine what may happen around April 10th, we need to refer back to the 0degree angle of cycle 20. By utilizing a hand calculator you will ﬁnd that in the last cycle 1541 days is on the 0 degree angle and this corresponds to October 31, 1986. Thus 5 days later the Dow peaked at 1899 on November 5th. Therefore in this cycle we should expect another high on the same either side of 5 days. And sure enough the magic of the square of nine produces results again, as on April 6th, 1987, 4 days before 1702 days on the 0 degree angle, the Dow reached an all time high that held for more than two months.

Before we move on to a few more examples, its important to realize that as more and more time passes from a major bean market low, the number of days between each 45 degree angle grows farther apart. Therefore its important after several months from a major low to divide the circle by 16. This gives you 16 angles between calendar days at 22 1/2 degrees apart.

Of course there were many major factors contributing to the top on August 25th. These areas follows, August 12, 1987 marked 60 months from the low on August 12, 1982. A geometrical angle gaining 32 points per month crossed 2700 in August 1987. Also 52×52 equals 2704 the square of 52. A very important natural number. This all pointed to a major change of trend in price and time. However, I’m getting ahead of myself, as this is information for my readers in future articles.

Did the square of nine predict the great crash on October 19, 1987. We’ll as noted on April 27th the Dow reached a low 4 days early on the 45 degree angle. In the next cycle on the 45 degree angle, 1893 days equals October 18, 1987 which fell on a Sunday. The next day the Dow crashed 500 points. Of course we cannot discount the help of another major cycle at that point. As two trading days earlier on October 15th marked the end of 270 weeks, or three quarters of the cycle of 360 weeks from the low on August 12, 1982.

One more example of our system using calendar days produced another bulls eye on November 10, 1987. This date falls one day after 1915 days which is on the 90 degree angle in the prior cycle the Dow closed at a low on May 20, 1987, two days earlier than 1744 days.

This is all hindsight now, isn’t it dear reader. Therefore can the square of nine really look into the future to predict tops and bottoms? Let’s put the reputation of the square of nine on the line, by predicting a market trend in the Dow after this article has gone to print. As noted earlier on August 25, 1987 the Dow reached an all time high on the 292 1/2 degree at 1939 days. In the next cycle on the 292 1/2 degree we ﬁnd 2014 days have passed and the calendar date will be March 5, 1988. On this date we will expect the market to reach a high give or take a few days. Don’t forget, watch out for psychological inversions. They could be dangerous to your bank account, so March 5. 1988 may turn out to be a low.

In my next article I’m going to write excerpts from an unpublished book that I’m writing about the application of the natural cycles of 45-52-144, and 360, and translating these numbers into days, weeks, and months. This article will teach you the mechanics of the division of time, and the application of the information to stock market prediction.

I’ll touch on a pet theory of mine as to how these cycles are actually a time gauge for the manifestation al all events on the planet earth, thus giving us an understanding of the mechanisms of the Kharmic Wheel of Life. W. D. Gann proved the validity of this himself, by predicting in advance, World War II, the participants, when it would start, and when and how it would end, by using these very cycles. Until next time.