A simple right triangle may be used as a template for illustrating important market moves. It is also the basis for generating additional, more complex templates. This particular right triangle has one leg twice the length of the other leg. Therefore, it is termed The One-Two Right Triangle. This triangle has unique properties, particularly in relation to Pi and fractional components of Pi (3.14159). A few of these are demonstrated in the following pages. These properties graphically illustrate geometric relationships between market moves as long as 40 years, many of which are perfect to the exact trading day.

The ratios between the sides, hypotenuse, and perimeter of the triangle are shown below. Of particular interest: The product of multiplying the ratio of the perimeter over the hypot-enuse by the ratio of the legs over the hypotenuse is 3.14167; approximately Pi. In addition, scaling some of these ratios by one thousand yields a value equal to the number of trading days in important market moves. 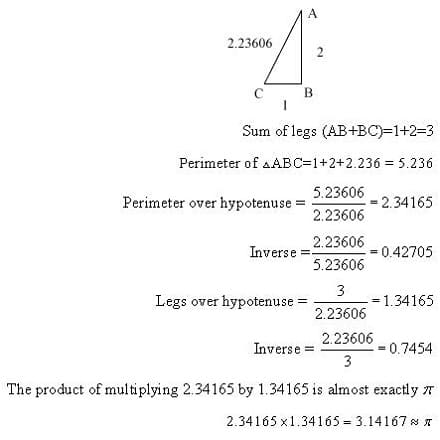 Ermanometry principles apply to every freely traded market. The material herein only covers the DJIA and S&P 500. When these two indices are rising or falling in concert but reach an important intraday extreme and reverse on different days, both days are considered pivotal, and together are termed a CompoundPivot. The midpoint between the two pivotal days is an Ermanometry BalancePoint. BalancePoints are an extremely important tool in Ermanometry. Example: In constant dollars, the DJIA high from 1932 was in 1966; the S&P high was in 1968. From these peaks, both indices declined until 1982. Trading days from the BalancePoint of the 1966-1968 CompoundPivot to the August 25, 1987 top equal 5083. 3.1416 × 1.618 × 1000 = 5083. The product of two mathematical constants produced a major market move, starting with a BalancePoint.

The last three months of 1994 saw the DJIA and S&P form a final consolidation area prior to a meteoric rise to historic highs in 2000. The DJIA intraday low for this period was on November 23rd, and the S&P intraday low was on December 4th. This created a Compound-Pivot and BalancePoint. Daily bar charts for both indices illustrate the derivation of the 1994 BalancePoint. 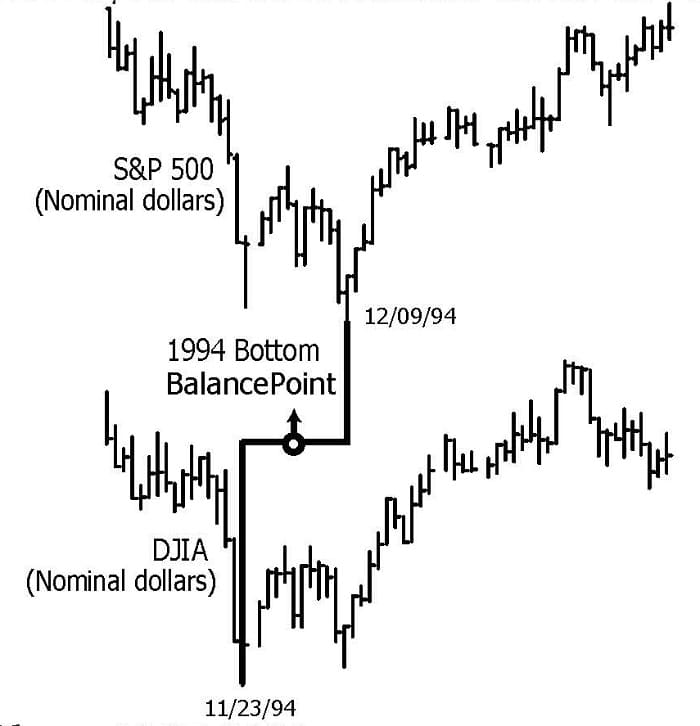 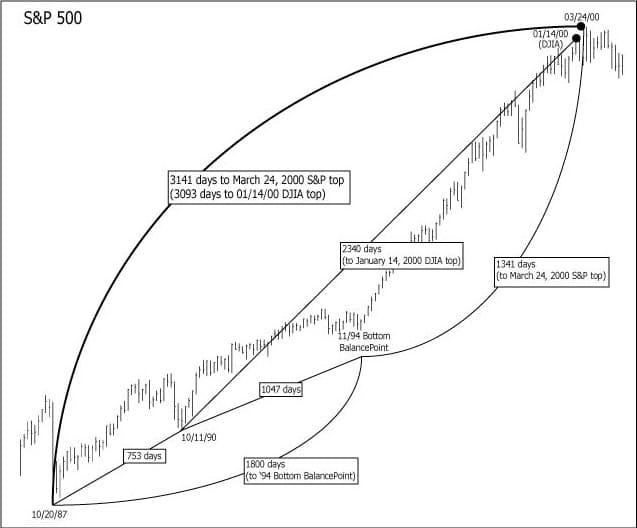 Figure 1 illustrates the importance of the CompoundPivot/BalancePoint Principle. Without the BP there would not be a move of 1800 days. Figure 1 also illustrates some interesting relationships between ratios and market moves. Most important of all, it illustrates how an important market move can be geometrically related to a future move.

Following are a few examples where 1800 is involved with major market moves, using its inverse, its square root, and also, scaling 1800 and then deriving its square root. Of course, 1800 is also important in multiple geometric relationships.

f. August 9 and August 12 create a three day CompoundPivot at the 1982 bottom.

On the monthly bar chart of the S&P, the number of total days between the 1990 low and the 1994 bottom BalancePoint is shown; 1047 days. The total days are the same for the DJIA.

The hypotenuse is 2341.6. Please recall from the beginning of this material that in any One-Two Right Triangle, the perimeter over the hypotenuse=2.3416.

The perimeter of this triangle is 5483. 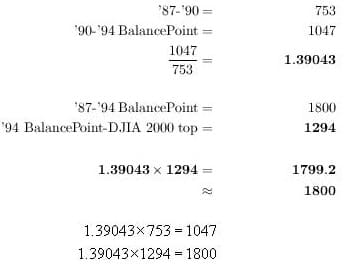 The Golden Mean is almost always present in market moves. The One-Two Right Triangle is an important element in geometrically illustrating the Golden Mean. For now we’ll merely take a quick look at the 2.3416 ratio (introduced on Page 3, it is the ratio of the perimeter of the one-two right triangle over the hypotenuse).

Assume the circle is inscribed within a square.

When a circle is inscribed within a square, each side of the square is equal to the diameter of the circle, or 1000.

The advance from August, 1982 to August, 1987 is perfectly proportional to the moves between the three previous major bottoms. It is also a scaled geometric constant. 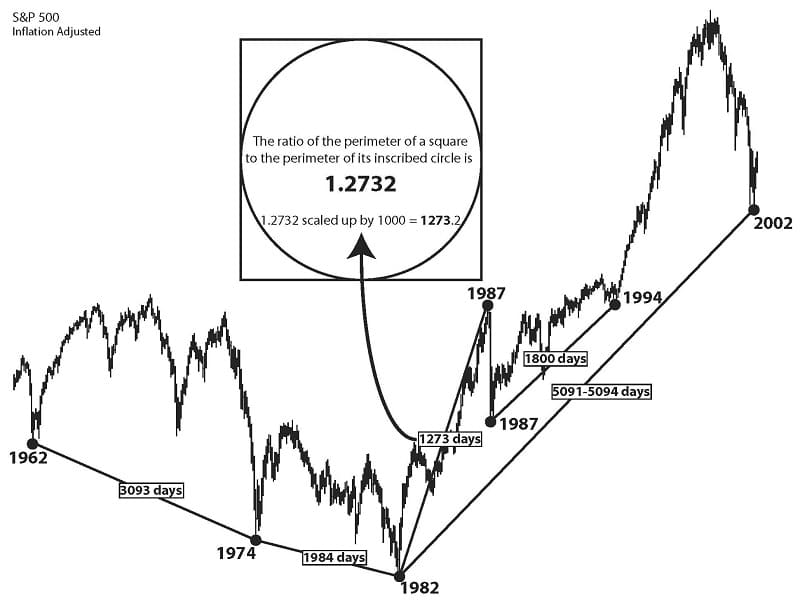 Assume a square with sides of 1273.2, the ratio of the perimeter of a square to the circumference of its inscribed circle x 1000.

The diagonal of any square is 1.4142 (the square root of 2) times the length of one side of the square. 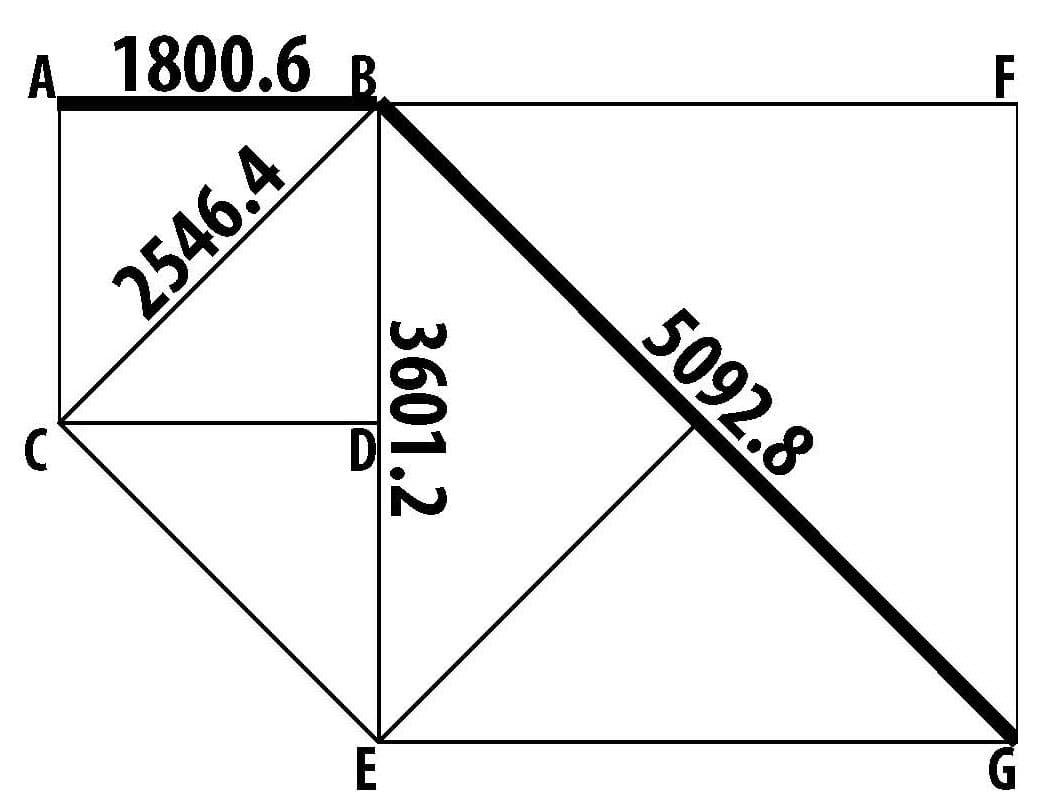 Now let’s come back to the one-two right triangle:

In Fig. C the diagonal of 1800.6 from Fig. A is now the short leg of one-two right triangle ABC. Triangle ADC is an isosceles right triangle (two equal legs), and the 5092.8 perimeter of the square, Fig. A, is the hypotenuse. 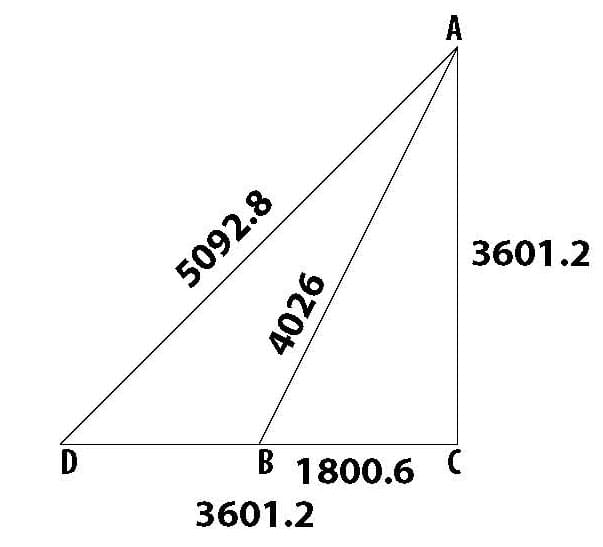 Not An Isolated Example!

Billions of decisions made by millions of people move the markets every day.  It is perfectly natural to assume randomness; to further assume markets could not be naturally perfect.  It is comfortable to look at the preceding examples as random coincidence.  Empirical evidence from within the markets provides literally hundreds of examples disproving coincidence, but this is neither the proper time nor place to present them.  However, one additional example is included because of its similarity to the geometry detailing the relationship between the 1800 day move (1987 – 1994) and the 1982 – 2002 move.

In the following example the geometry illustrates the relationship between the 1962 – 1973 and 1973 – 2002 moves.  This forty year span is “perfect” to the day.  Other examples illustrate this degree of accuracy for periods longer than seventy years.

The chart on the following page illustrates the application of these geometric principles to these market turning points in 1962, 1973, and 2002. 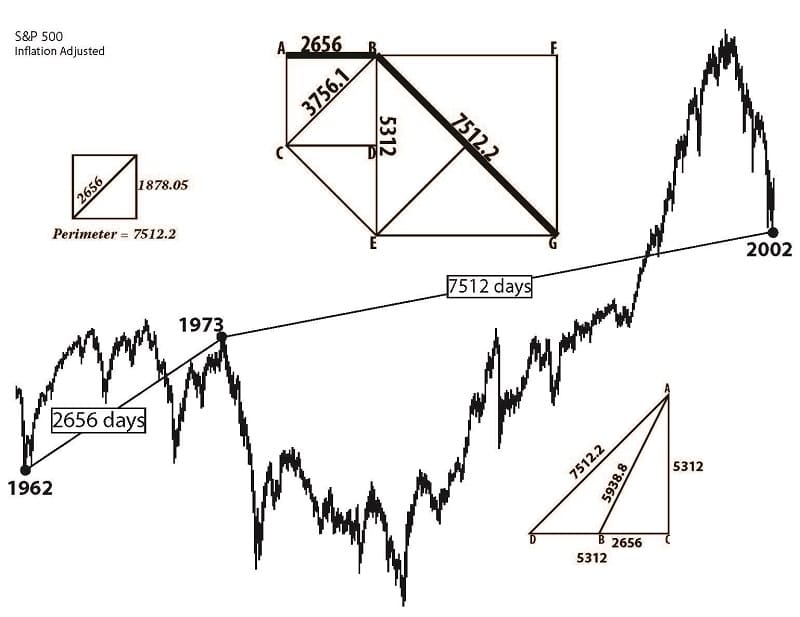 If you think the immediately preceding examples merely illustrate the same thing in different ways, you are correct. However, visualizing market moves in various geometric configurations, no matter how simple, is a first step toward understanding more complex market structures. We’ve seen how the 1800 day move is related in simple and significant ways to many other important market moves. Ermanometry CompoundPivot and BalancePoint principles made it possible to identify the 1800 day move.  You have already seen how this move is critical for precise market analysis. CompoundPivots and BalancePoints are a giant leap forward in decoding the markets and generating profits.