The remainder of this section is divided into two parts. We first examine the shape and the slope of PHI-ellipses, and include approaches for attaching and overlapping PHI-ellipses. In the second part, we address entry and exit rules for the generation of trading strategies from PHI-ellipses.

Dealing with chart patterns depends a lot on the definition of swings just as it depends on controlling impulse waves and corrections with-out losing sight of the main trend picture. The strength of PHI-ellipses, in this respect, is that no matter how many waves or subwaves are in a price pattern, we receive a solid overall picture of the total price pattern as long as a PHI-ellipse can circumvent it.

Even if we reduce the analysis to a simple 3-swing pattern, an indefinite number of combinations of impulse waves and corrections will be possible. Impulse waves are fairly simple to handle, whereas dealing with corrections and long sideward periods in the markets can be very tricky. Traders and analysts call these periods “noise” in the markets.

PHI-ellipses are ideal geometrical trading tools for coping with noise and analyzing price moves over time without having to focus too much on every intermediate minor peak or valley between the starting point and the ending point of the price pattern. The best way to demonstrate the generation of PHI-ellipses is by starting with a circle and then turning the circle into PHI-ellipses. A circle is a special kind of PHI-ellipse because the ratio of the major and minor axes is 1.000 from the PHI series. Figure 5.1 shows the process of generating PHI-ellipses. 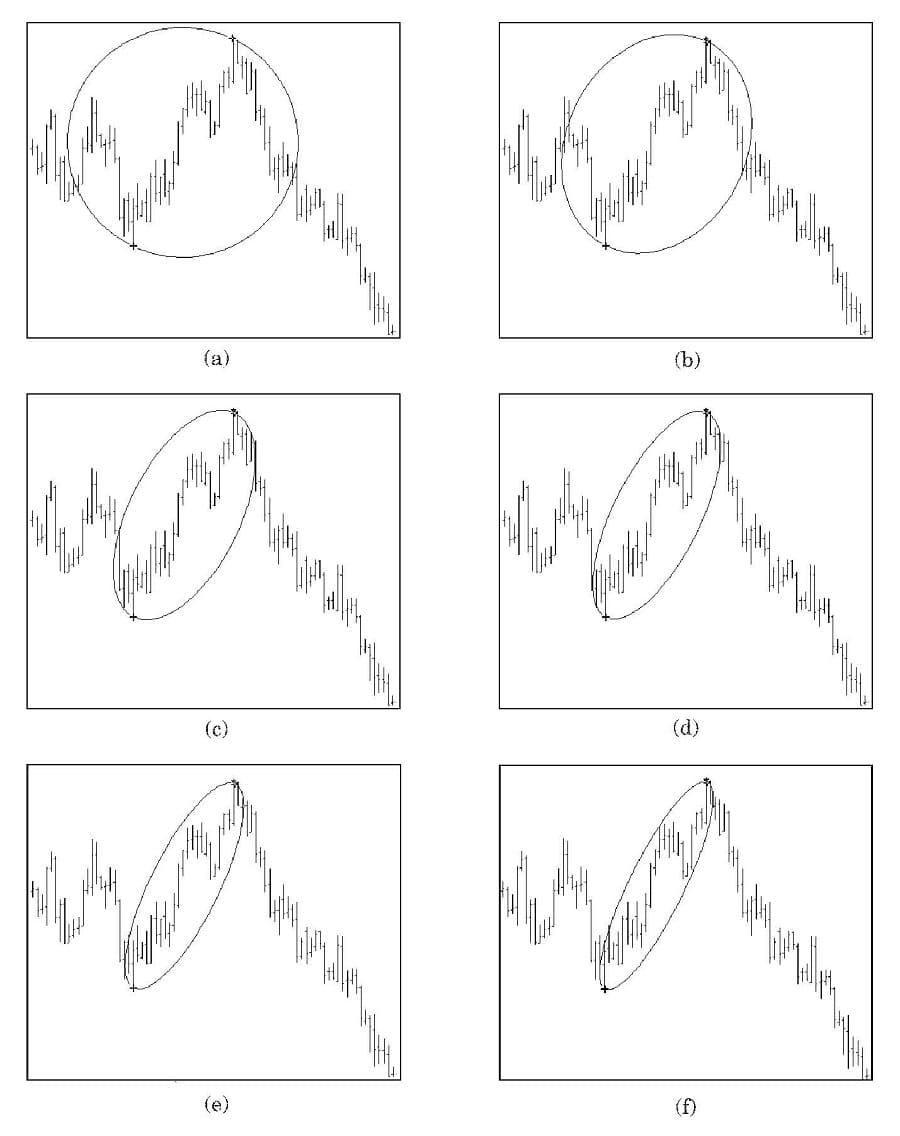 From the circle, ongoing PHI-ellipses can be drawn at alternative axis ratios 1.618, 2.618, 4.236, 6.854, 11.090, 17.944, 29.034, and so on, from the PHI series. According to the mathematical formula for Fischer-transformed PHI-ellipses, the length of the major axis remains unchanged. The minor axis thereby gets shorter and shorter. The resulting PHI-ellipses become narrower and narrower and finally perfectly enclose the entire price move.

It is evident from the sample charts that because ellipses have such special structures, they can only be used on computers and with particular software packages. Fischer-transformed PHI-ellipses, moreover, are unavailable elsewhere and can only be generated by running the WINPHI graphics software that accompanies this book. PHI-ellipses are interesting graphical trading tools because their very structure is founded on a 3-wave pattern, as shown in Figure 5.2.

Working with PHI-ellipses means watching price action as it progresses. Price action starts with the impulse wave 1 from A to B in Figure 5.2, followed by the correction from B to C. In the discussion of corrections and extensions in this book, Elliott’s wave principles helped us determine that the corrective move is not expected to go lower than the low at the beginning of wave 1. Only in exceptional cases did we consider bull traps and bear traps. With PHI-ellipses, however, we consider all sorts of 3-wave moves as long as we can put a PHI-ellipse around them (see Figure 5.3). 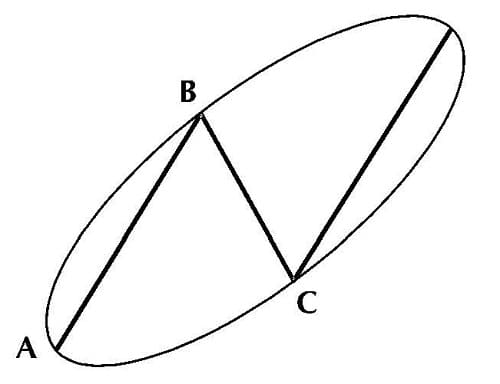 The 3-swing pattern in Figure 5.3 is an ideal picture of a price move, but in reality, waves within a PHI-ellipse may take many forms and magnitudes. As price action progresses, peaks and valleys may touch the outside of a PHI-ellipse several times without destroying the pattern.

We have analyzed and worked with PHI-ellipses for many years, and have found it fascinating to observe the different kinds of price action within PHI-ellipses. Based on the developing price action, PHI-ellipses might need adjustment, which is why working with them takes such discipline. But once investors get used to them, they realize that PHI-ellipses are amazing Fibonacci-related trading tools.

There are many possible price behaviors within PHI-ellipses. According to the appropriate ratio for drawing a PHI-ellipse chosen from the PHI series (see Figure 5.1), PHI-ellipses may be fatter or thinner, longer or shorter. But these facts do not have to worry investors too much, because price action itself shows up before the final structure of the PHI-ellipse. Investors must have tremendous patience and flexibility to wait until market pricing reaches the end of the PHI-ellipse. However, the dynamism and f lexibility of PHI-ellipses can also be an investor’s strength, because no other investment tool can make price patterns as graphically visible.

Figure 5.4 Price movements not reaching the final points of PHI-ellipses.

We cannot define a standard PHI-ellipse that suits every product. To work properly with PHI-ellipses as investment tools, we must identify the minimum length and the minimum thickness of relevant PHI-ellipses for every product that we trade. Each product reveals its characteristic price behavior in typical price patterns that we can identify only with historical charts.

Once the length and thickness of a typical PHI-ellipse for any given product are identified over 10 years or more with a constant price scale, the probability is high that investors can use this PHI-ellipse for future trading. PHI-ellipses tell us where we are in the market price action at any point in time. Whenever a market trend reverses at the end of a PHI-ellipse, we can take the final point of an old PHI-ellipse as the beginning of a new one (see Figure 5.5). 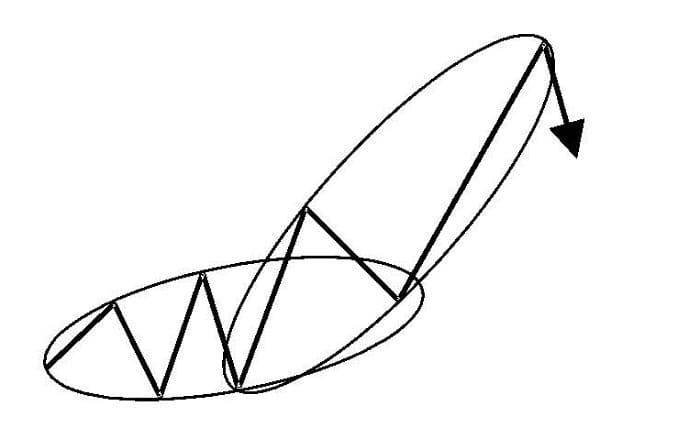 The slope of a PHI-ellipse is another parameter that traders must not underestimate. This slope determines the profit potential of countertrend trading signals from market entry point to profit target (see Figure 5.7).

Figure 5.7 Profit potential based on the slope of PHI-ellipses. 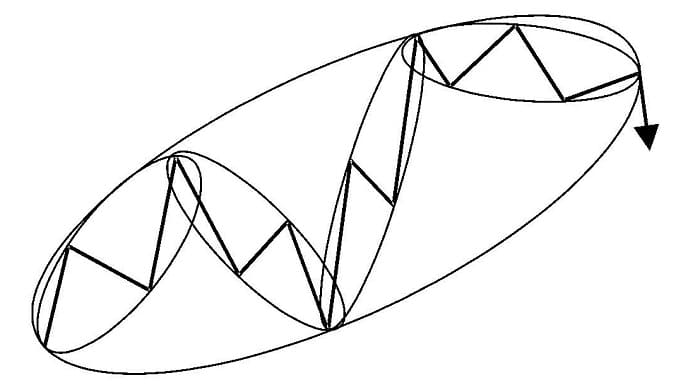 Investors who use PHI-ellipses must monitor price moves consistently. This is a minor problem on weekly and daily data, but on intraday data, there is a lot of pressure to identify and to wait for the end of a PHI-ellipse. Therefore, PHI-ellipses on an intraday basis have to be handled with care and can only be recommended for experienced Fibonacci traders. Simultaneously analyzing the same product on weekly and on daily data often benefits the outcome of the analysis. For example, recognizing a PHI-ellipse with a strong uptrend from weekly data will help to identify the correct trading signals in daily data. Figure 5.9 illustrates the latter notion.

To identify the best average PHI-ellipse for any given product requires a software package like our WINPHI program, which allows investors to draw any PHI-ellipse desired on sets of historical data and on a constant price scale. Once traders have identified the PHI-ellipse for any particular product, they can apply it to real-time trading. Identifying specific PHI-ellipses is like pattern recognition in the markets. Pattern recognition has an advantage, however, because stable price patterns detected on historical price moves have a chance of repeating and can become trading indicators for the future.

Newer Gann’s 1929 Forecast
Back to list
Older Rules For Trading In Commodities By W. D. Gann

2 thoughts on “PHI-Ellipse By Robert Fischer”