Has The Gold Vein Dried Up? By Ron Walker

Many investors have given up on gold at these extended levels, thinking that it is all tapped out. But certain technical signs suggest that we may soon be ushered into the next phase of the gold rush. In Dale Carnegie’s 1937 book about people skills titled How to Win Friends and Influence People By Dale Carnegie, he tells the story of a New York insurance broker in the 1880s named RU Darby who got gold fever. Subsequently, he went west to Colorado with his uncle to make his fortune in gold. He became a prospector, and after a lot of hard, backbreaking work, they discovered a very rich vein in the Rocky Mountains and began mining it. Then, realizing that they needed heavy machinery to continue the excavation, Darby and his uncle returned back East, where he convinced his friends to invest in his mining operation, and a new corporation was born.

They bought a great deal of equipment and began to mine for gold. The gold vein produced just enough gold ore to pay off the debt that the new company had accumulated, but shortly after that, the vein ran out. The miners kept drilling, but to no avail. Frustrated, Darby decided to close the mine. Discouraged, the company eventually sold the mine and the equipment to a junk dealer in Denver for just a few hundred dollars before they returned back East.

The junk dealer decided to hire a geologist to study the mine, to see if the vein had in fact dried up. After close examination and inspection of the mine, the geologist advised the dealer to drill three feet from the point where Darby had stopped, and he’d rediscover the gold vein. The geologist assured the dealer that the previous owners were just unfamiliar with the fault lines of the mine, and that was why they couldn’t locate the point at which the vein resumed.

The geologist proved to be correct in his analysis, and the junk dealer became the richest man in Colorado. Darby had given up prematurely after convincing himself that the mine was tapped out. Darby went down in defeat, having stopped three feet from the mother lode, unaware of how close he was to success. He gave up too soon, only three short feet away from a fortune. Similarly, investors might be prematurely throwing in the towel on Gld. After a long period of consolidation in 2009, it has positioned itself to begin drilling away at resistance, which may result in the rediscovery of a renewed advance.

The streetTRacks Gold Trust Shares (Gld) mimics the price of gold. The exchange traded fund (ETf) is designed to reflect a tenth of the price of gold. Currently, the weekly chart of the continuous contract on gold ($Gold) is finding resistance at or near the $975 level, which closely resembles the $97.50 on the Gld weekly chart in Figure 1.

Over the course of 2008 and all of 2009, a very large inverse head & shoulders (H&S) price pattern set up on Gld’s weekly chart (Figure 1). The neckline of the pattern is sloping down, producing a trendline that is slightly declining but still running horizontally. Upon completion of the pattern, after the right shoulder formed, the bulls got cold feet as prices hesitated at resistance in early June and then suddenly pulled back. 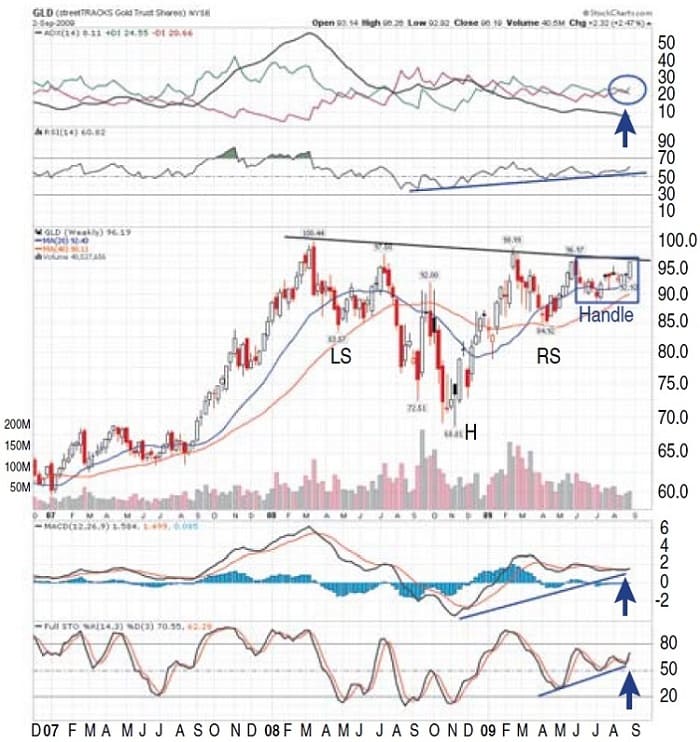 FIGURE 1: GLD, WEEKLY. The weekly chart of GLD needs to drill through the neckline of resistance. Once that occurs, it will renew the advance on the gold ETF. Prices are showing strength as the strong support as they hover above the 20- and 40- week moving averages.

The pullback at resistance carved out a handle on the large reversal pattern. Often, after a prominent reversal pattern is completed, prices drift downward and form another higher low to shake out weak longs. After the downward spiral concludes, prices will inch their way back up to test resistance again. Handles form on many patterns but are mostly associated with cup patterns.

Should the inverse H&S pattern play out, the measurement is calculated by taking the difference between the high and the low of the pattern. This measures 31 points, giving a minimum objective target to about the $128 level. If the handle fails, and prices crumble below the last significant low of $88.82 made in early July (the momentum low of the handle), it would destroy the pattern. But technical indicators on the weekly chart of Gld appear to agree with the reversal pattern, which will likely produce a bullish outcome.

For instance, the average directional movement index (adx) (14) has fallen below both directional movement indicators (+DI and -DI) and is bottoming out. Once it does so and begins to rise again, should the +DI line be above the -DI line, a new major uptrend will be born. The +DI line just crossed above the -DI line, generating an early buy signal, suggesting that the inverse head & shoulders pattern will soon get a breakout.

See Also Books and Courses about Trading With Indicators

The relative strength index (Rsi) (14) continues to have a rising trendline and remains above 50, indicating that Gld has the strength to move higher. The moving average convergence/divergence (Macd) (12,26,9) has firmed up above the zero line. The stochastic (14,3,3) has also confirmed higher lows while turning bullish after a brief test of the median line at 50. Momentum is with the bulls when the stochastic is above 50.

In Figure 2, Gld has had quite a robust move off the November 2008 lows near $68. Gld rallied until February 2009 to approximately $99, then pulled back to the $84 level, breaking the rising trendline from the November 2008 lows. Another rally in late April and May carried Gld back to test that $99 peak, but prices halted just below that level, stopping short near $97. Prices then took the path of least resistance and drifted lower, only to put in yet another higher low at $88. The consolidation’s second pullback during June didn’t break the previous minor low, which is extremely positive. 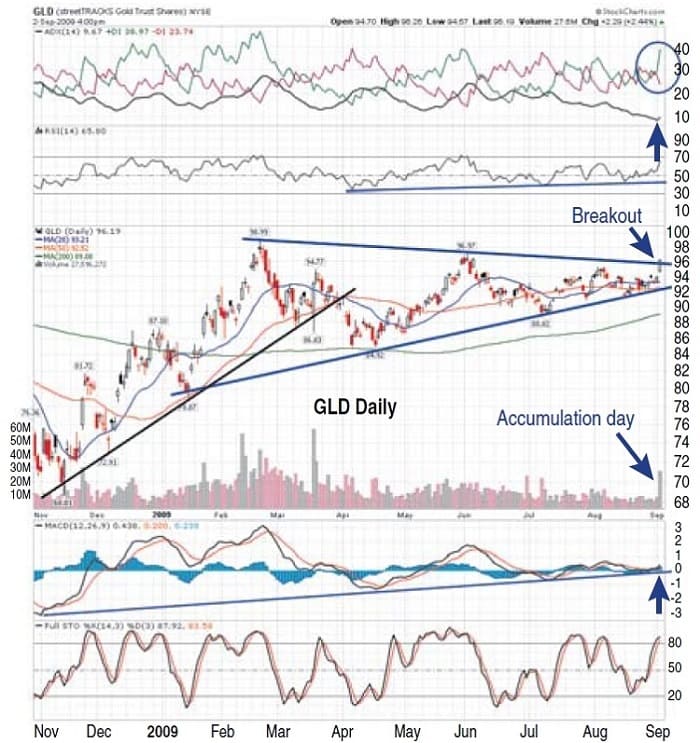 FIGURE 2: GLD, DAILY. The trend-based indicators in this chart represented by the ADX and the MACD are both conﬁrming the breakout. The newly overbought stochastic reveals that momentum has shifted in favor of the bulls, while a strong increase in volume validates the price surge.

Gld has consolidated throughout 2009 in the form of a symmetrical triangle. This triangle is more than likely setting up a continuation pattern that may result in the rediscovery of the next vein in the gold sector. The symmetrical triangle broke on September 2, 2009, which should build the momentum necessary to push above the neckline on the inverse head & shoulders pattern in the weekly time frame. At that point, it will be next to impossible for the bears to do anything concrete to stop the bulls, as they cement more power. The symmetrical triangle pattern measures 20 points to a target of approximately $116. Remember, the target for the inverse head & shoulders pattern on the weekly chart is higher than that at $128.

In the daily time frame, the indicators seem to be in sync with a bullish outcome as well. First of all, the breakout on the daily chart was confirmed by massive volume. The Rsi has a nice rising trendline while moving to new highs. The Macd is also bouncing off a long-term trendline after turning bullish with the breakout, ready to sail back above the zero line. The stochastic has become newly overbought, showing that momentum is with the bulls.

Parenthetically, the adx on the daily chart is attempting to put in a bottom, similar to what we saw in the weekly time frame. The +DI line crossed above the -DI in a bullish fashion, coinciding with the breakout of the triangle pattern. The price, volume, and indicators are all blending together in a confluence of support centered around this breakout.

Where Will Gold Go?

Even though Gld is up against an insurmountable amount of resistance on its weekly chart, and it seems as if we are spinning our wheels watching prices shuffle up and down, back and forth on the daily chart, Gld appears to be positioning itself to move higher.

As we begin to speculate on the next big advance in the gold ETf, we must not only have the right equipment (our indicators) but should also study the fault lines of support and resistance. The geologist in the Darby story knew that if the junk dealer drilled in the right place, he would rediscover the vein. Just as we know that if prices continue to drill into resistance on Gld’s weekly chart and penetrate through it, we very well may only be three feet away from tapping into the next gold vein.

Newer What’s Your Trading Price? By Alexander Sabodin
Back to list
Older GEMs Among The Talus By Thomas Maskell