Compuwave By Robert A. Saperstein and Thomas Gautschi

The purpose of this article is to outline how COMPUWAVE analysis is proﬁtable applied to the markets of the 80’s. Compuwave combines the projections of Elliott Wave analysis with today’s computer generated technical studies. The ideal markets to apply COMPUWAVE are those with large volume and broad public participation, so that mass psychology is represented in market moves. The U.S. Treasury Bond futures and the stock index futures markets stand out with these characteristics. Compuwave analysis can be applied to all time frames, from monthly down to intraday price swings.

The great advantages of Elliott Wave analysis are that the technician can anticipate market moves in a given wave structure and he can project amazingly accurate Fibonacci price targets. This allows him to construct trades, using the Elliott rules and guidelines, with well deﬁned proﬁt objectives and risk points. Even with these obvious advantages, Elliott Wave analysis does have limitations. The rules and guidelines are ﬂexible enough to allow many different wave counts to be attached to a given market situation. The technician must look for all the possible counts, pick the most likely one by ﬁtting the count into the next higher degree, and by determining the proper “wave personality.” Determination of wave personality through market strength and weakness is where the computer generated studies can be applied. They will conﬁrm the current count being used, or they can aid in the selection of the proper wave count from all the alternates. 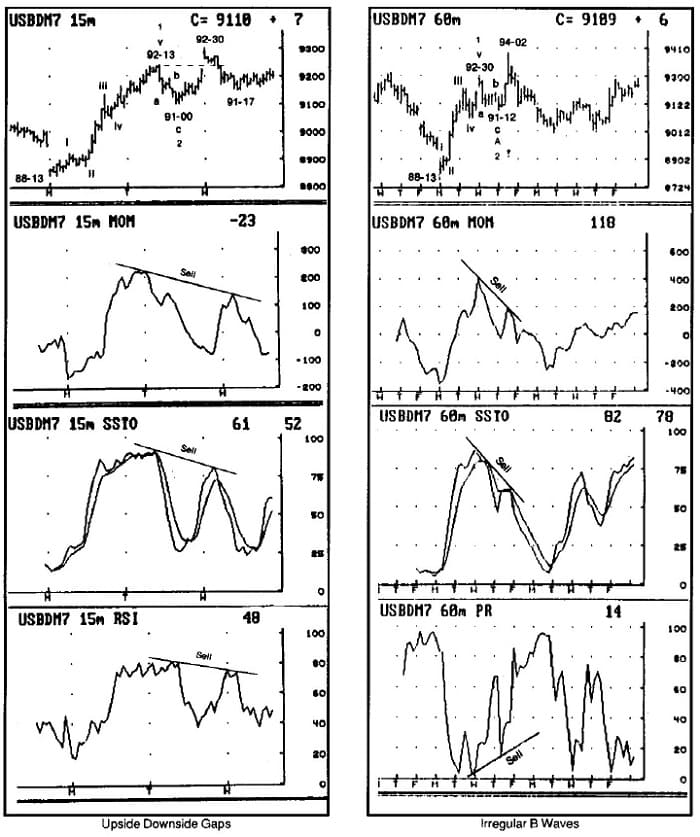 The ﬁrst set of COMPUWAVE tools are those used for standard Elliott Wave analysis. This begins with the hourly close-only charts of the futures and cash markets. The most actively traded 30 year U.S. Treasury Bond, S&P, NY Composite, and DJIA indexes are the cash markets to chart. Intraday 5, 15,30, and 60 minute bar charts are used to match the intraday price ranges with the hourly dots so that accurate Fibonacci price targets can be generated. Price targets for stock indexes are best calculated with the price swings, since the widely ﬂuctuating futures premium causes wave overlaps or unreliable targets. Waves of larger degrees are counted on the daily, weekly and monthly charts. Cycles and bullish consensus ﬁgures offer additional support to the wave counts.

After using the standard Elliott Wave tools, wave conﬁrmation or wave selection can now be greatly aided by the following computer generated technical studies: Slow Stochastics, Percentage of Range, Momentum, and Relative Strength Index. These mechanical studies will indicate when the market is overbought or oversold. Peaks of ﬁrst, third, and ﬁfth waves, and B wave rallies should give overbought readings on these studies. Second or fourth wave corrections and C waves within those corrections should give oversold readings. The studies also provide valuable divergence information. Third wave rallies should have the highest momentum in a ﬁve wave impulse. When the ﬁfth wave rally arrives, Stochastics and Momentum peaks that are lower than where they were for the third wave will help conﬁrm that the market is actually peaking a ﬁfth wave.

After experimenting with many time periods to build the technical studies, 13 periods seem to offer the best signals. The slow Stochastics indicates an overbought condition when the k line crosses the d line in the area above 80 percent. Oversold is indicated when the lines cross in the area below 20 percent. The Percentage of Range indicator is best used as an oversold measure, when it moves above 95 percent. The Momentum indicator is best used to note divergences between waves. The RSI gives indications of being overbought at readings of 80 or above, and indications of being oversold at readings of 20 or below. Rate of Change, quite similar to Momentum, is also a useful study. 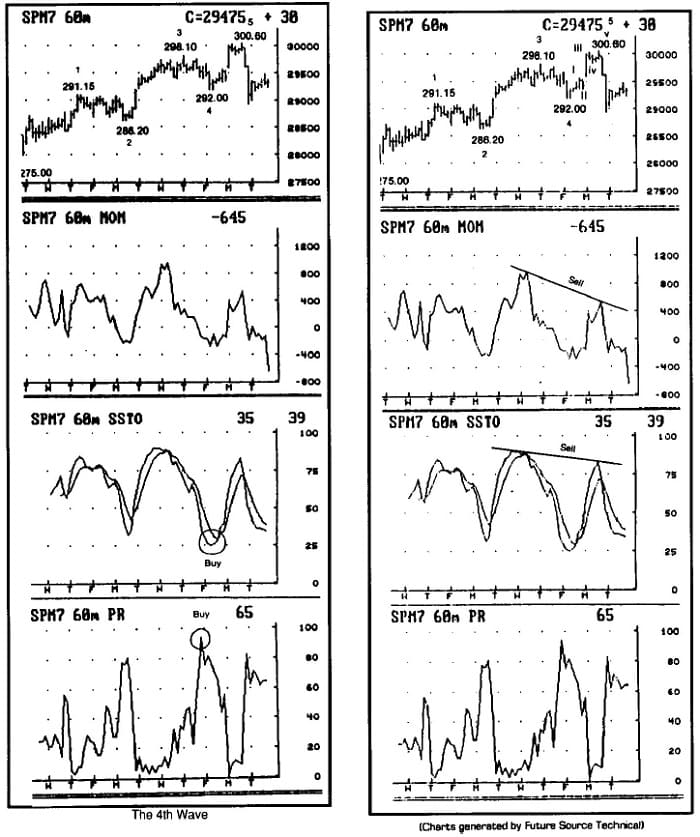 Common situations where COMPUWAVE analysis can be applied are shown in the following:

Daily price gaps provide very useful information regarding the current count. For this article, a daily gap is deﬁned as a morning opening above or below the previous day’s range – excluding any evening or foreign trading. A gap that remains open during the trading session helps conﬁrm that the market is in the third wave of an impulse, and trading in the direction of the gap carries a high degree of success. However, if the gap is ﬁlled during the day the follow-through is often very swift. *In this example the Bonds appeared to have counted ﬁve waves up from 88-13 to 92-13, completing a larger wave 1. A corrective three wave move to 9 1-00 was four ticks shy of a 38 percent retracement, and a rally to 92-08 into the close followed. The market was ideally set to gap up into a third wave. A look at the Stochastics showed that a buy signal was given for the two wave pullback. The next morning the market gaped above 92-13 by opening at 92-28, but the Stochastics, Momentum, and RSI were diverging with the peak at 92-13. This indicated that the gap must remain open to keep the market in the third wave. Therefore, whether long or not, a sell stop at 92-12 allowed the trader to catch a swift move to 9 1-17 as the gap was ﬁlled. The gap turned out to be an exhaustion ﬁfth wave gap to 92-30, and the low at 9 1-00 was labeled as a fourth instead of a two wave.

Once a market makes a ﬁve wave advance completing a larger one wave, and then completes a three wave correction, the ensuing rally should be either a third wave or a B wave. A third wave will normally announce itself with a gap-up opening. In the absence of a gap, when the rally starts carrying above the previous ﬁfth wave peak, the computer generated studies can help determine if the rally should be aggressively bought as a third wave, or if it is simply a B irregular false breakout. This example continues the previous one, which ended in a ﬁfth wave exhaustion at 92-30. The following three wave decline to 9 1-12 could have been labeled as an A or 2 wave. The sharp rally from 91-12 deﬁnitely had the appearance of being a third wave.

However, the Momentum and Stochastics studies clearly showed strong divergences between this rally and the ﬁfth wave peak at 92-30. Note also the divergence on the Percent of Range study. These divergences helped identify the move to 94-02 as a B irregular, which would now lead to expectations of a C wave destined to undercut the A wave at 91-12.

This example continues the previous two with the Bonds having peaked a B irregular at 94-02. The expectation now would be for a ﬁve C wave to undercut the A wave at 91-12 and ﬁnd support at a Fibonacci target. The standard 38 percent and 62 percent retracements of the ﬁve wave rally from 88-13 to 92-30 were 9 1-07 and 90-04. As the Bonds declined, each leg down took the form of three waves and the ranges began contracting. This led to the possibility of a diagonal triangle, which occur in the ﬁfth wave or C wave positions. Since alternate legs of triangles are normally related by 62 percent, another target for the termination of the C wave could be generated. The third wave of the triangle went from 92-16 to 90-26, a move of 54 ticks. Sixty-two percent of this move, subtracted from the fourth wave at 91-14 yielded a target of 90-13. Since the 38 percent retracement had already been violated, the target range for the end of C was 90-13 to 90-04. Now the computer generated studies would conﬁrm the Elliott Wave targets. The Percentage of Range study peaked at 96 mid-day on Monday, while the Stochastics study generated a buy signal after the opening on Tuesday. The C wave ended just before Monday’s close, right into the target range at 90-12. Note also the divergence in the Momentum on the way down.

One of the most structured trades that Elliott Wave analysis can offer is buying a 4th wave against the top of a 1st wave. Since a 4th wave should never overlap the 1st wave, once the bottom of the 4th wave is targeted the risk becomes the distance between the target and the top of the 1st wave. The proﬁt objective will be to liquidate above the peak of the 3rd wave. In this example the S&P rallied in a 3rd wave advance from 275 to 298.10, and it appeared to have potential to turn into a 5th wave rally. The targets for a 4th wave pullback were 293.55 for a 38% retracement of the 3rd wave, and 293.15 where the 4th would have equality with the 2nd wave. As the market came down into the target area, a look at the computer generated studies helped conﬁrm that the decline was a 4th wave, even though it exceeded the target area by moving to 292. The Percentage of Range peaked at 94 into the close on Thursday, while Stochastics were entering an oversold area. Going long in the target area or below would require a stop at 291.10, just below the peak of the 1st wave, with an objective to liquidate above 298.10. The Stochastics further conﬁrmed the 4th wave as it gave a buy signal during Friday’s trading. The cash market also held much better against its 1 wave, giving the trader encouragement.

5th waves, as the final moves in an impulse, are clearly confirmed by the computer generated studies. The most powerful part of an impulsive move is located in the 3rd wave, while the 5th wave should be expected to be less dynamic. This difference in momentum in the two waves is exhibited by divergences in the Momentum and Stochastics studies, as shown in this example. After have bought the 4th wave in the previous example, the emergence of a 5th wave is conﬁrmed by the studies as the diverge into a move above the 3rd peak at 298.10. The maximum that this 5th wave was expected to go was 303.90, since it could not be larger that the 3rd wave (which was smaller than the 1st wave). Once the market was above 298.10 though, the 5th wave could terminate anywhere between there and 303.90. This particular 5th wave was subdividing into 5 waves itself, with the peak of its 3rd wave a 300.25. So attempting to exit on a 5th of a 5th above 300.25 was perfect as S&P rallied one last time to 300.60.

Traditional Elliott Wave analysis is in itself a very powerful tool. Now the availability of the high speed computer’s technical studies makes wave analysis even stronger. The objectivity of the studies helps to bring wave analysis to a more scientiﬁc stage by reducing some of the uncertainties in proper wave selection. The COMPUWAVE combination of wave analysis with the computer studies’ conﬁrmations produces trades that have the highest probability of being proﬁtable. Nothing could be more straightforward than having a 5th wave target met along with the 60, 30, 15, and even 5 minute studies all at their extremes to exit the impulse and position yourself for the correction.

The examples presented in this article are just a few of the many instances where COMPUWAVE can be applied. Elliott Wave patterns are constantly in the process of unfolding. Careful attention to the weekly, daily, hourly close only and intraday charts for wave counts, supported by extremes and divergences on the computer generated studies, will produce a great number of structured trades with Fibonacci price projections and wave guideline risk points. It is often said that “they don’t ring a bell at the top,”, but COMPUWAVE should help ring its own bell for you.