In recent months, we have heard a great deal about astrology, especially the role it has played in the White House. This began a nationwide media focus on astrology, and its use in the ﬁnancial markets. When you consider the ﬁnancial power of foreign investors, many who use astrology, it should not surprise you that the markets often reﬂect astrological timing methods. Financial astrologers had information available to precisely forecast both the exact August top and the October crash! Why then, are the astrologers sometimes wrong? Perhaps if we look to W.D. Gann, the legendary ﬁnancial predictor, we may ﬁnd the answer. We know that Gann did not reveal his most valuable knowledge in his stock and commodity courses. For example, only through his writings did he advise students to read the Bible three times to obtain knowledge.

W. D. Gann did not rely on only one system to predict price movements. He used a variety of techniques, such as astronomical cycles which many astrologers fail to use. For example, Jupiter’s position at the exact Dow low in August 1982 was at three degrees Scorpio. Jupiter’s ﬁrst opposition (180 degrees, 1/2 circle, cycle) to this sensitive degree (for the Dow) in the heavens was on March 22, 1988. A trend change occurred at this time!

Read Gann and the Planets Article By Gregory Legrand Meadors

Some of the more “modem” theories of market forecasting actually are mathematical principles that have ancient esoteric sources. For example, one theory uses the mathematical Fibonacci ratio which is revealed in the Great Pyramid. The problem with this approach is not accuracy, but rather reliance on only one forecasting method. Many followers of this method were looking for the Dow to explode during 1987 and reach the target of 3600. Because of their lack of knowledge of Biblical and astronomical cycles (some of these are also revealed in the Great Pyramid), their myopic forecast doomed them to major losses when the Dow reversed unexpectedly into the October Crash. 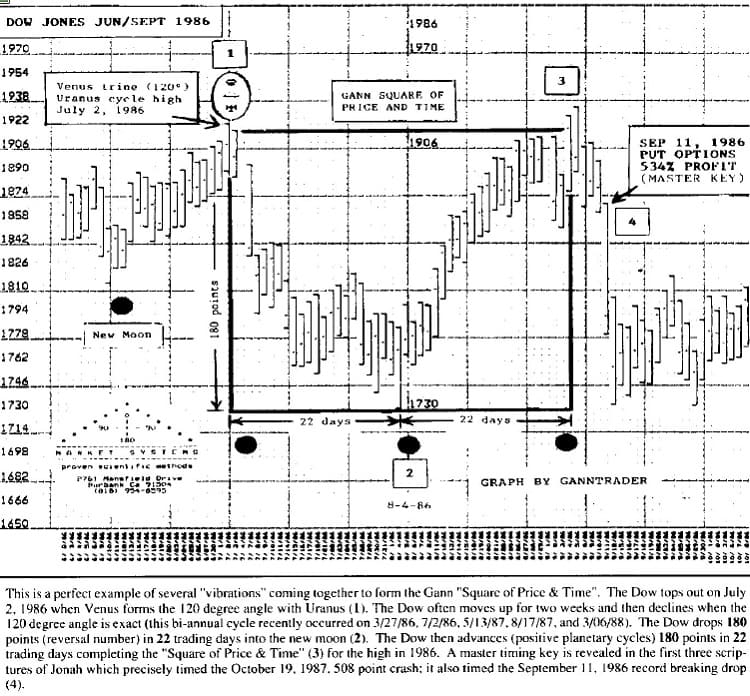 The top of the market in August 1987 and the October Crash were forecasted months in advance in my Market Systems March 1987 newsletter. The reason these moves were predictable was that they were confirmed by astrological (see the article “Gann and the Planets,” August/September issue of the Gann & Elliott Wave), astronomical, numerological, and other time cycles that are found in one of the most enlightening sources that Gann recommended the BIBLE!

The top of the market in August 1987 and the October Crash were forecasted months in advance in my Market Systems March 1987 newsletter. The reason these moves were predictable was that they were confirmed by astrological (see the article “Gann and the Planets,” August/September issue of the Gann & Elliott Wave), astronomical, numerological, and other time cycles that are found in one of the most enlightening sources that Gann recommended the BIBLE!

Scripture does state that you are not to worship or serve the stars (as gods or idols). Many believe therefore, that obtaining knowledge from the heavens (astrology) is evil. Yet Scriptures also state that God uses the heavens for signs and to provide knowledge to those who have wisdom and understanding. “And God said, Let there be lights in the ﬁrmament of the heaven to divide the day from the night; and let them be for signs, and for seasons, and for days, and years.” (Genesis 1:14). Note the scriptures Genesis 15:5 and Genesis 37:5-10. Jacob did not respond to Joseph’s ﬁrst dream but recognized the importance of the second dream when God used the sun, moon, and stars to represent Jacob, his wife, and children. According to the book Astrological Secrets of the Hebrew Sages, by Rabbi Dobin, all the astrological and astronomical references in the Old Testament of the Bible would be equivalent to over two full pages of the New York Times!

The Biblical view, of course, is that God is Omniscient and Supreme, and the inﬂuences of the heavens only provide an indication of His Divine Will. “Can you bind the sweet inﬂuences of Pleiades (cluster of stars), or loose the bands of Orion? Can you lead forth Mazzaroth (signs of the Zodiac) in their season? Or can you guide Arcturus (the stars of the Bear) with her young (satellites)? Do you know the ordinances of heaven? Can you establish their rule upon the earth?” (Job 38:31-33) “The Heavens declare the glory of God, and the ﬁrmament shows and proclaims His handiwork. Day after day pour forth speech, and night unto night shows forth knowledge. There is no speech nor language, where their voice is not heard.” (Psalms 19:1-3) Thus everyone can see God’s pattern of creation in the heavens. “They fought from heaven: the stars (planets) in their courses fought against Sisera.” (Judges 5:20) 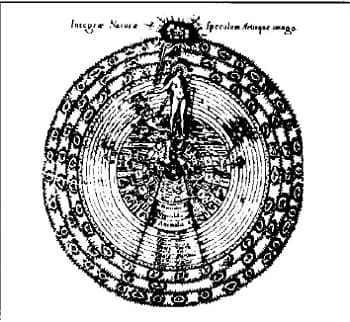 In the ﬁnancial markets the length of days before a trend change is critical for market timing. “Happy is the man that ﬁndeth wisdom, and the man that getteth understanding Length of days is her right hand, and in her left hand riches and honor The Lord by wisdom hath founded the earth; by understanding hath He established the heavens.” (Prov. 3:13-19) Mars entered the sign Gemini on April 6, 1987 exactly timing the double top on the Dow. The length of days in this sign ended when Mars left Gemini and entered Cancer on May 21, 1987 exactly timing the length of days of this correction!

Read Book: All about Market Timing: The Easy Way to Get Started

In the last issue I explained how the widely advertised Harmonic (planetary) Convergence (see Newsweek: 8/17/87) exactly timed the top in the Dow and why the October 6, 1987 lunar eclipse timed the start of the October crash. It amazes me how some can ignore these correlations. What could be more natural than the precision timing and mathematical beauty of cosmic cycles to time earthly cycles? Consider the moon, that faithful witness, whose axis rotation exactly equals the time it takes to circle the earth. (Psalm 89:37)

The Earth is a magnet, which is surrounded by a vast sea of electromagnetic energy. Most of this energy comes from the sun. Humans also produce electromagnetic energy through their nervous systems. Water covers most of the Earth and our bodies are mostly water. The moon affects the water on Earth (tides), and eclipses have a drastic effect upon the earth’s magnetic ﬁeld. Is it illogical to conclude that these cosmic events could also have an effect on human behavior and (investor) psychology? Where does the word “lunatic” come from? Johann Kepler,known as one of the founders of modern astronomy stated: “The planets forming angles (aspects) upon the earth by their luminous beams, of strength to stir up the virtue of sublunary things, have compelled my unwilling belief.”

Two of the more interesting references in the Bible for ﬁnancial information are the 1 1/2 and 3 1/2 year Biblical cycles. In Revelation the 3 1/2 year cycle is conjoined with the 12 signs of the zodiac as well as the sun, moon, and stars: “A great and wondrous sign appeared in heaven: a woman clothed with the U.N., with the moon under her feet and a crown of twelve stars and his tail swept away one third of the stars of heaven… She had a place prepared by God, so that there she might be nourished for 1260 days (3 1/2 years).” (Rev. 12:1-6)

See also  The Truth About Divergence By John Hayden 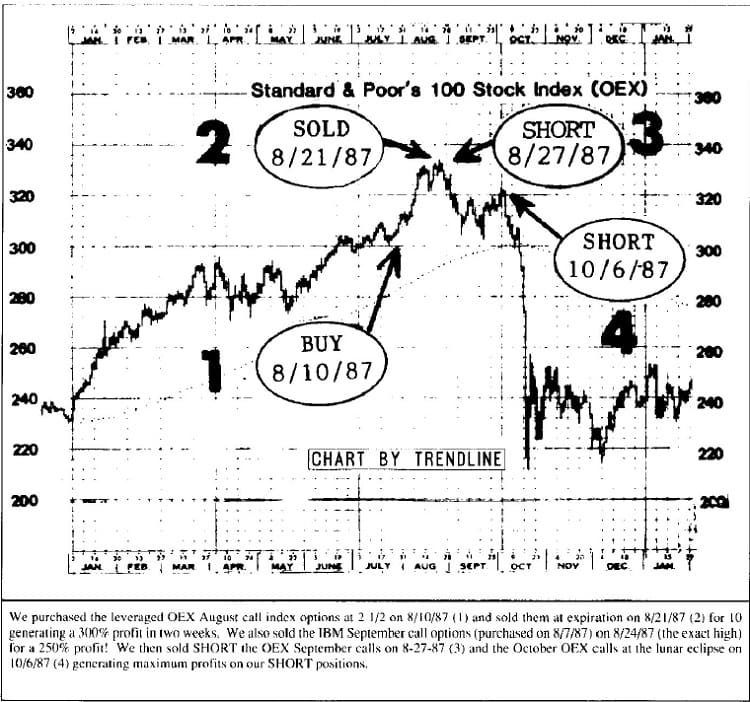 The astronomical and ﬁnancial signiﬁcance of these scriptures points to the Saros eclipse cycles. Saros (meaning “repetition”) refers to the name of the complete cycle of eclipses, for it was noticed that the eclipses would return to the exact location in each of the 12 signs of the zodiac every 6585 and one-third days. The rotation of the earth for the extra one-third day causes one-third of the background stars (that are visible on the previous eclipse cycle) to be “swept” from view. A complete series of Saros eclipse cycles occurs every 1260 years. According to Van Nostrand’s Scientiﬁc Encyclopedia, this was known by the Babylonians as early as 1000 B.C. The correlation of these Scriptures with the Saros eclipse cycles is unmistakable. Notice that when you multiply 360 (degrees of a circle) by the Biblical 3 1/2 measure you obtain both the Saros eclipse and Biblical number 1260.

In his book, Truth of the Stock Tape. Gann states that he used astrology and made forecasts based upon the numerical values of letters in a name. Few understand what Gann meant, and yet, most people are familiar with the “number of the beast (666)”, depicted in “The Omen” series of movies. “Here is wisdom. Let him that has understanding count the number of the beast; for it is the number of a man; and his number is 666.” (Revelation 13:18) If you count the numerical value of the “NEW

(John 1:1), but he does not reveal all his “pearls of wisdom” (Matthew 7:6). Consider the words “proﬁt” and “prophet” which have the same sound “vibration”. In The Tunnel Thru the Air, Gann states that the Biblical story of the prophet Jonah contains many “keys” to market timing. The words in the ﬁrst three verses of Jonah reveal a priceless time cycle “key” to those who have Biblical knowledge. This “key” precisely timed the record breaking 86 point drop on 9/11/86 (options paid 5 34%) and the record 508 point drop on 10/19/1987 (options paid over 100 to I). This market timing “key” applies to stock and commodity markets and is included in my Market Timing Course.