A geometric relationship between two planets is called an “aspect”, and when we refer to Harmonics, we are talking about aspects. The concept of planetary lines will allow you to see not only conjunctions, but any aspect between two or more planetary elements converted to price. We do this by looking at harmonic divisions of a planet’s position, and plotting those harmonic divisions in price.

We have already explained how to convert a planet’s position to price, and this allows you to plot the positions of one or more planets on a price chart, and to visually see the points where those planet’s paths intersect. These points of intersection are the points where the planets you are viewing are in conjunction with one another. This is an aspect on the first harmonic. The first harmonic is simply 360 / 1, which is equal to 360. When you view a planet with the setting of 360, you are viewing it’s ACTUAL position on the wheel from 0 to 360 degrees.

Moving inward through the divisions of the wheel:

Most major reversals can be attributed to one of the first four harmonics. Planets make conjunctions to one another only seldomly. However, they also make other important aspects to one another on a more regular basis. The most important of these aspects are:

The graphic below (Example 1), illustrates these aspects in wheel format.

Once you understand the correlation between aspects and harmonics, you can jump to the next step of harmonic price analysis, which is finding the price points that relate to aspects other than conjunctions.

I will explain briefly. If we want to find the second harmonic position of a planet in price, we can simply divide the distance between the planetary price lines by 2. In effect, we are adding 180 degrees to the planet’s position to get the position of that planet on the opposite side of the wheel. 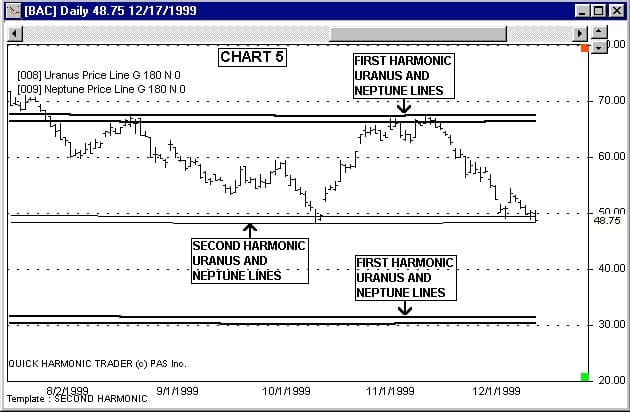 Chart 5 shows the second harmonic Uranus and Neptune lines on Bank of America Corp. (BAC). Note that Uranus and Neptune’s current positions on the wheel of 360 are both in the area of 300-315 degrees, which translates to 30.00 – 31.50. The next higher first harmonic set of Uranus and Neptune lines can be located by simply adding 360 to this range, which leaves us with the 660-675 area, or 66.00 – 67.50. You will see that BAC has registered two significant highs on this higher set of lines over the past year.

You can then see that we have taken the midpoint between the two first harmonic positions of Uranus and Neptune, by simply adding 180 (half of the wheel), to get the second harmonic set of lines in the area of 480-495, or 48.00-49.50. This 2nd harmonic support channel has defined a couple of key lows. Price often expands harmonically, and by understanding the nature of the geometry of the system and applying that knowledge to price action, we are able to glean some very useful information from price action.

This knowledge creates many opportunities for profitable trades. For my own trading system, I use an advanced system of analysis that includes overlaying many harmonic planetary systems onto each price chart to determine the trend. I also use the analysis of the birth (incorporation) charts of different companies to project whether a particular company has positive or negative influence. I then combine all of these tools with tested technical systems to monitor my trades. This rigorous approach to the market has paid off with steady returns over the years, and my methods continue to be fine-tuned through practice. To this date, I have not found a more precise method of price analysis than planetary price harmonics. Further, I believe that this type of analysis will ultimately be accepted by the entire trading community as a valid measure of price action.