Which Way For The Forex Carry Trade By Brian Twomey

Apply this very popular trading strategy to your trades.The foreign exchange carry trade has been a popular trading strategy for the past 10 years due to growing economies and rising interest rates. This period of world growth was precipitated by the last economic downturn in world economies (1998) that lasted approximately two years. Currently, with a credit crunch upon us and recession gripping world economies in late 2008 and forecast to last well into 2009, all nations are in the process of slashing interest rates. Where does that leave this most popular and profitable of trading strategies? In this article, I will examine the carry trade, its definition, its uses, its purposes, and a compendium of possibilities for 2009.

The carry trade, more commonly known as the crosses, is a simple and popular trading strategy in the currency market. This trade involves buying a high-yielding/high interest rate currency and selling a low-yielding/low interest rate currency. For many years, the Japanese yen has been the most favored carry trade strategy because of its traditionally low or no interest rate governmental policy. By matching the yen with a high-yielding currency from a growing economy, you can earn interest on a daily basis because of the difference in yield. By choosing a nation coming out of a recession and on its way to solid long-term growth with the possibility of rising interest rates, you can earn years of yield credited on a daily basis.

Many other popular and profitable yen strategies have existed over the years, such as Australian dollar/yen (AUD/JPY), sterling/yen (GBP/JPY), Canadian dollar/yen (CAD/JPY), euro/yen (EUR/JPY) and Swiss franc/yen (CHF/JPY). All economies of the seven majors have had solid growth with rising interest rates for many years, a boon for the carry trade due to the raising of interest rates into inflation.

Besides the yen, there are many other combinations for the carry trade such as GBP/CHF, EUR/CHF, AUD/CAD, EUR/GBP, and more. The EUR/GBP must be evaluated for the positive interest to determine if a long or short position would be best as these two currencies move in the same direction as the EUR/USD and GBP/USD.

In the carry trade, what we are doing is buying one currency, the high-yielder, and selling the low-yielder and pocketing the difference in interest rate spreads. Suppose Japan adopts an interest rate of 0.5% as it did in 2008. The NZD/JPY trade would still be profitable, as the 7.5% spread would still be earned. The interest income is accrued everyday for traders who are long the carry trade. For those who are short, interest must be paid. These monies are deducted and added to your account at 5:00 pm every day through your broker by the Bank of International Settlements. Those traders who short the NZD/JPY are interested in capital appreciation rather than yield and probably more interested in holding this position for a shorter term. The calculations are fairly simple:

When you are long a carry trade position, you want the pair to either stay at the same price you bought it at and earn interest or rise so you are earning pips as well as interest. If you are interested in earning long-term interest, you would buy these pairs using a monthly or even a yearly chart, while shorter-term traders would be best served using a daily chart. Using a daily may mean holding a position for anywhere from days to weeks, depending on the intensity of the trend.

The carry trade can be an extremely risky endeavor. This is not merely due to the leverage involved with buying a currency pair, but as we know too well, global crisis situations can have a dramatic effect on movements because of the money invested in this risky trade by investors and traders worldwide. Traders would certainly bail out of a carry trade if a war ensued, a missile was tested, or there was a negative economic announcement.

The yen has been the premier funding currency for these transactions. Capital flowing in and out of nations can stop in an instant, and higher premiums must be paid to take on further risk. In addition, carry trade movements can have dramatic effects on exchange rates and spot prices. The spot market is where we, the retail and speculative trader, spend our time trading. I like the adage quoted in recent studies concerning carry trades: They go up the stairs and down the elevator.

There are a number of ways to evaluate risk concerning carry trades for 2009. Falling interest rates and economic crisis is a disaster for carry trades because currencies tend toward strength rather than weakness when interest rates and bad economic announcements occur. New Zealand was once prosperous with an 8% interest rate; it is now at 5%. England’s interest rates went from 4.25% to 2.50%, Australia’s from 6% to 4.25%, and Switzerland’s is now at 0.50%. Even Japan cut its rates from 0.50% to 0.10%. All nations have dramatically slashed their rates and are predicting more cuts in the future. This is especially disastrous for those nations that are export-dependent, creating more trouble for the carry trade.

Hedge funds, major companies, and central bankers would certainly not be apt to take on risk in these environments. To measure further carry trade risk into the future, look at the major indexes that measure risk such as the volatility index (VIX), option risk reversals, TED spreads, LIBOR, fed funds rates, and the US Dollar Index.

The VIX is an equity option on the Standard & Poor’s 500 that measures implied volatility (Figure 1). It is a global measure of risk and is the predictor of direction for certain currencies. When the VIX is up, investment (upper) currencies will see higher returns and lower returns for funding (lower) currencies like the yen. This means carry trade losses. One way to predict carry positions is to follow the VIX. When the VIX achieves exorbitant price levels, traders can go long the carry trade once prices begin to descend. In recent studies, the VIX has been proven for its predictability for carry trade activity several quarters into the future. 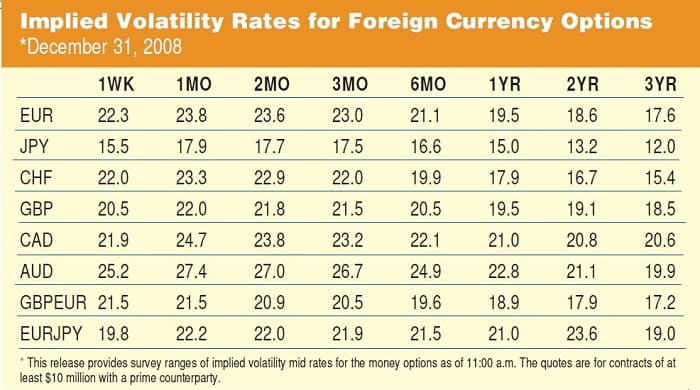 FIGURE 1: IMPLIED VOLATILITY RATES. The implied volatility rates are averages of mid-level rates for bid and ask “at-money” quotations on selected currencies at 11:00 am on the last business day of the month.

To do this, you want to look at USD/JPY since the yen is the currency option most popular to determine future risk. You want to look at the difference in volatility between one-month 25 delta calls and one-month 25 delta puts. Zero is a good place to start, since this shows low volatility for carry trades and a good way to earn interest on a position. If investors and traders are buying more puts than calls, this results in a declining yen, which is detrimental to the carry trade. These risk reversals have an inverse relationship with the VIX.

The idea for investors is to buy quality instruments. What we are measuring with the TED spread is a factor of liquidity and a willingness of banks to lend to each other at LIBOR three months into the future. The TED spread is used as a measure of risk. A rise in the TED spread denotes a level of risk, and a high risk of default that bankers are not willing to take. It means withdrawal of liquidity, a decline in equity markets, and selling of carry trades across the board.

The problem is that LIBOR is trading higher than prime rates in many nations. So why should bankers lend? When the TED spreads decline, bankers will again be able to lend profitably and carry trades will be popular again. As a result, the popular futures trading position is to go long T-bill futures in the cash markets and sell eurodollar futures. With the cut in US interest rates below European interest rates, it is cheaper for European bankers, traders, and investors to borrow and invest at the current T-bill futures price. This is a safe trade. Until this relationship between LIBOR and the prime rate gets resolved, buying the carry trades will be unpopular going into 2009.

A further way to look at this relationship is to understand US fed funds rates. This is the rate that banks charge each other for overnight loans and use to satisfy reserve requirements, similar to LIBOR. If fed funds futures are trading above prime, bankers can’t borrow at the futures price and lend at the prime interest rate. They can’t be profitable. For the carry trade, this represents uncertainty of direction due to uncertainties of interest rates. Again, until this dilemma is resolved, the carry trade will not be a popular trade for well into 2009.

This relationship can be measured against the VIX and risk reversals. The TED spreads and the VIX have a tendency for prices to move together while risk reversal prices decline. A higher VIX and a higher TED spread increases returns for high interest rate currencies and decreases returns for low interest rate currencies. What does this say about the yen? It follows T-bill prices and bond yields, which is another measure of carry trade activity.

Another variable to consider is the dollar index. When the US Dollar Index is rising, this is a boon for the carry trade as the yen will see higher returns while the investment currencies will see a decline in prices. A rising dollar will see a declining VIX, a rise in risk reversals as more calls than puts are bought, and a decline in TED spreads. 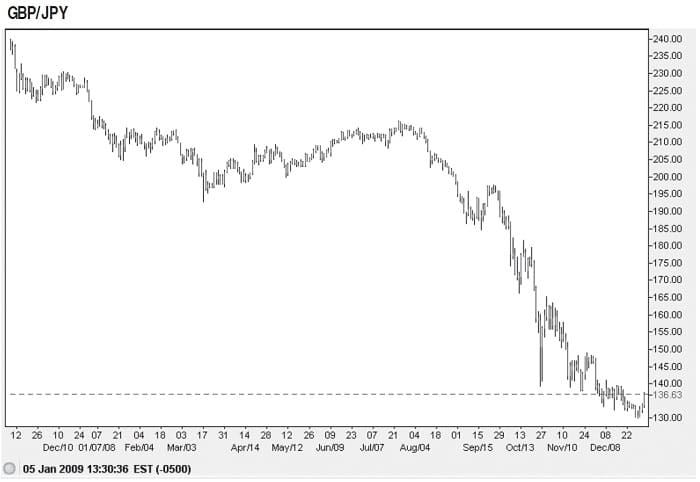 FIGURE 2: GBP/JPY CARRY TRADE PAIR. Note the downward trend since the beginning of September 2008 in this GBP/JPY carry trade pair. This trend coincides with a rise in the VIX, TED spreads, fed funds, and LIBOR. This is not favorable for carry trades as the direction of these economies and interest rates are not well-defined.

Figure 2 displays the price movement of the GBP/JPY carry trade pair. The downtrend since the beginning of September 2008 coincides with a rise in the VIX, TED spreads, fed funds, and LIBOR. This is not good for carry trades since the direction of these economies and interest rates are not well defined.

On the daily chart of the EUR/JPY in Figure 3, note again the downtrend. It began with a spike low in September 2008. A rise in the VIX, TED spreads, LIBOR, and fed funds rates all contributed to this spike low. Since interest rates are the major drivers for the carry trade, it suggests that an uncertain future exists. 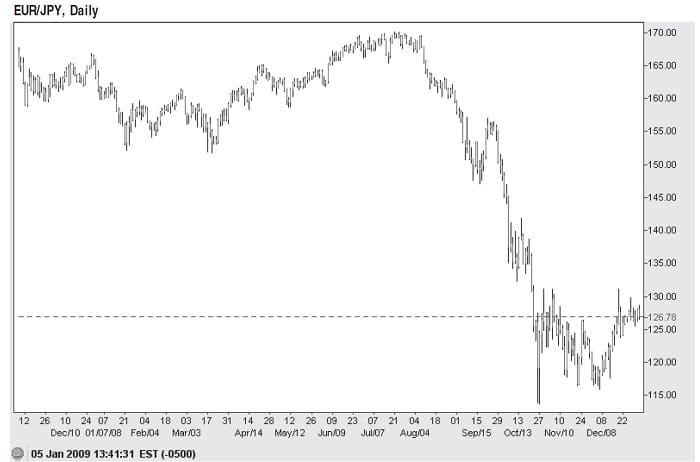 FIGURE 3: EUR/JPY, DAILY. Again, note the downtrend. It all began with a spike low in September 2008. A rise in the VIX, TED spreads, LIBOR, and fed funds rates all contributed to this spike low. Since interest rates are the major drivers for the carry trade, it suggests that an uncertain future exists.

Speculation abounds with the Japanese economy in bad shape where the yen carry trade has been the premier funding currency throughout the world. With the US dollar at its lowest in interest rates and a safe currency, the dollar could possibly take the place as the new funder of the carry trade. Others place bets on the CHF as the Swiss interest rate is now 0.5% and the Swiss economy is more stable than that of the Japanese. To determine this scenario, watch the UBS risk-aversion indexes for the direction of Swiss carry trades.

What can we glean from this information? Interest rates are the driving force of all markets, especially the currency markets. When to buy, sell, or hold carry trades is based on the movement of interest rates. The most sensitive determinant of a day’s movement of interest rates for daytraders/carry traders is the LIBOR and EUROLIBOR rates that are released during the European trading day. To determine predictions that are farther out of LIBOR and eurodollar rates is to look at the relationship of TED spreads and the VIX. This will determine the direction for the carry trades.

Brian Twomey is a currency trader and adjunct professor of political science at Gardner-Webb University.