Are you one of those people who have tried to read some of the writings by W.D. Gann and felt like you might as well be reading Greek? Consolation is here. Most beginning students of Gann’s works feel thoroughly confused, if not totally bafﬂed. The situation is somewhat analogous to someone who picks up a book written in Greek, having absolutely no knowledge of Greek, and tries to understand those writings on assumption that they are reading English. The difference is that Gann’s writings utilize the English alphabet, therefore, wrongly reinforcing the illusion that he is communication to you in normal conversational English. W.D. Gann was actually writing in another language” or jargon, but he usually didn’t bother to tell most people this.

The language of W.D. Gann is Astrology. All though the writings and charts of Gann are allusions to the principles of Astrology. For example, in your Gann research you may have noticed Gann’s use of the date of incorporation for a company, the date of the ﬁrst day of trading for a stock or futures contract, the zodiacal dates surrounding the “Square of Nine” chart, the planetary symbols found in his own handwritten market charts, the planetary ephemerides with his personal notes written inside found among his books, the use of angles basic to astrology, and the collaboration with other astrologers. I said “other astrologers” because ﬁrst and foremost, W.D. Gann was an astrologer. Everything else is supplementary. 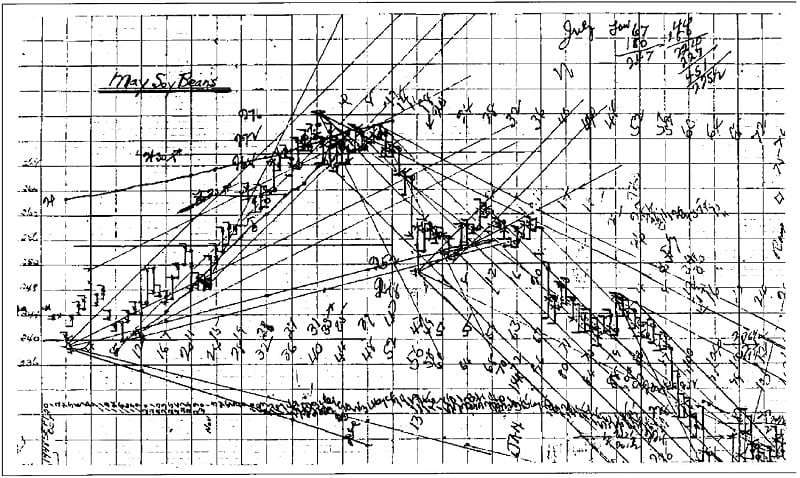 Astrology is the correlation of extraterrestrial phenomena with terrestrial phenomena. It is a specialized branch of cycles. Gann liked to refer to it as “the law of nature” or “natural law.” The bottom line is that Gann said that timing was the most important factor and he based most of his market timing on astrological factors or principles.

Several years ago, I had the good fortune to talk on the telephone on several occasions with a former associate of W.D. Gann’s. Because of a promise to keep his identity a secret, I can’t tell you his name. But, he lived in Pittsburgh, Pennsylvania, and his initials are R.C. R.C. ‘s father was a very good astrologer and had worked with Gann. When R.C. was a young man, he followed in his father’s footsteps and started working with Gann. He worked with Gann on a full-time basis as a partner and collaborating astrologer for about ten years, from the late 1930’s to the late 1940’s. During our conversations, R.C. told me that “ﬁrst and foremost, Gann was astrological.” He also said that during that period, he worked with Gann. Gann made most of his money by selling market letters and $5000 courses. In 1948, when Gann accurately forecast the top of the soybean market, almost to the penny and the minute, Gann sold one soybean futures contract short and rode it down one dollar for a gain of $5000.

This is a tribute to “Gann the man” but it does punch a hole in Gann, the ﬁfty million dollar super genius trader. Of course, no trader is better than the system he uses. Was Gann a genius? Perhaps, but knowing that will neither help you trade nor help you learn the systems and perspectives Gann utilized. Were the systems Gann used ingenious? On that there is no doubt, the answer is a resounding yes. Gann was successful because he had the beneﬁt of thousands of years of ancient principles on his side, of which he was a relentless student. If you are still skeptical about W.D. Gann using astrology, I have included a chart of May soybean futures used by Gann. A copy of this same chart also appears on page 202 of P.J. Kaufman’s 1978 book, Commodity Trading Systems and Methods. I mention this so that you can see for yourself that I did not in anyway alter this chart. Now, please refer to this chart. In the upper left hand corner you will ﬁnd “May Soybeans.” Follow the vertical line down, which goes through the yin May (three horizontal lines). There you should ﬁnd a strange looking four, followed by a 30 and an arrow like glyph. The strange looking four is the astrological/astronomical symbol glyph for the planet Jupiter. The 30 represents thirty degrees. The arrow like glyph is the symbol for the sign of Sagittarius (240 degrees). Gann was indicating that with Jupiter at thirty degrees of Sagittarius, 240 degrees plus 30 degrees equals 270 degrees, there should be important support/resistance at a price of 270.

There is another Jupiter glyph on the left side of the chart near the price of 264 on the price scale, with a dotted, jagged line extending up and to the right. The dotted line plots the movement of Jupiter. Directly to the right of this last Jupiter glyph, below the “a” in Soybeans, you will ﬁnd a small circle with an arrow on top, the symbol for the planet Mars. This is followed by “22”, and the arrow like the glyph for Sagittarius. Gann drew a line to the right pointing to another dotted jagged line. This line represents the movement of Mars. Now, follow this line up to the right. Notice that it intersects with the Jupiter line. This represents Mars conjunct Jupiter or in the same place by longitude. This is an important astrological event which coincided closely with the retest high of the market. The time has come for you to decide for yourself whether to learn the true ancient principles that Gann studied or to remain in a confused cloud of delusion. There are no easy answers. W.D. Gann took ten years of his life to study at the world’s greatest repositories of ancient knowledge and continued to study, the rest of his life.

Newer Taking Gann, Elliott, And Fibonacci To The Bank By Robert Miner
Back to list
Older Gann’s Pyramid And Fourth Factor Volume By Jim Purucker