Since you are likely using sampled data when trading, there is a chance that there could be some distortions in the data. Here’s what you can do to avoid those distortions. Imagine that most traders consider the price data they use for analysis to be a continuous function. Nothing could be further from the truth. And, depending on your trading style, the impact of this assumption can range from trivial to dramatic. The fact is that the data is sampled data. The sample rate is once per day on daily bars, once per hour on hourly bars, and so on. It doesn’t matter if you average the high, low, and close; you still only have one sample per day on daily bars.

One impact of sampled data is that it can lead to aliasing. In my youth, the old cowboy movies had a sample rate of only 16 frames per second, letting the eye integrate those individual still photographs to produce motion, albeit with a little ﬂicker. Aliasing at this slow sample rate made the wagon wheels look like they were turning backwards, and the effect was really weird. Aliasing can also produce some weird effects on your market data.

Mathematically, the process of sampling is multiplying a sine wave at the sampling frequency with the cycles in the continuous data. From your high school trigonometry class you may recall this equation:

Here’s the important part for market data: there is nothing inherent in the data to preclude content whose period is shorter than that of the Nyquist frequency. That means you should expect the upper sideband to be folded back into the lower sideband, producing a false composite signal due to aliasing. The real question is how badly the aliased composite wave-form affects your trading. Figure 2 shows the closes of daily prices of SPY as the green line, while the red line shows the majority of the aliased signals removed by ﬁltering in the composite waveform at the cost of a half bar of lag.

FIGURE 2: HOW DOES THE ALIASED COMPOSITE WAVEFORM AFFECT YOUR TRADING? Here you see that aliasing produces short-term volatility in the composite data.

JUST HOW BAD IS IT?

The aliasing impact is better demonstrated in Figure 4, where the ratio of the composite signal plus alias is shown as a ratio to the signal in terms of decibels. The maximum impact is at the two-bar cycle period—the period of the Nyquist frequency. Two octaves below the Nyquist frequency, at the eight-bar cycle, the impact is less than 0.5 dB, and therefore is basically insigniﬁcant at longer cycle periods. Other theoretical models of the market can be created, and these generally show that the aliasing impacts depicted in Figures 3 & 4 are a conservative estimate. 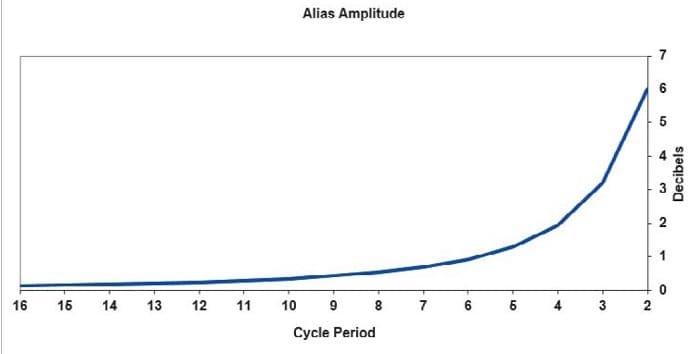 So what does all this mean to a trader? If you are a trend follower and are using tools like a 50-day moving average or a 200-day moving average, the cycle periods of the data you are using is so far removed from the Nyquist frequency that you can just ignore the impact of aliasing. On the other hand, if your technique involves recognizing short-term patterns in the range of two to ﬁve bars, you should seriously rethink your approach because aliasing produces illusory patterns. Short-term traders using cycles or mean reversion should take active measures to mitigate the impacts of aliasing.

See also  The Us Long Wave By Mark Rivest

WHAT CAN BE DONE TO MITIGATE ALIASING EFFECTS?

The ﬁrst line of defense to avoid problems associated with aliasing is to just accept that you should not work with cycle periods within two octaves of the period of the Nyquist frequency. For daily data, that means you should not expect to use cycle periods shorter than eight bars. Even with this constraint you should reduce the swing of the composite waveform by ﬁltering. 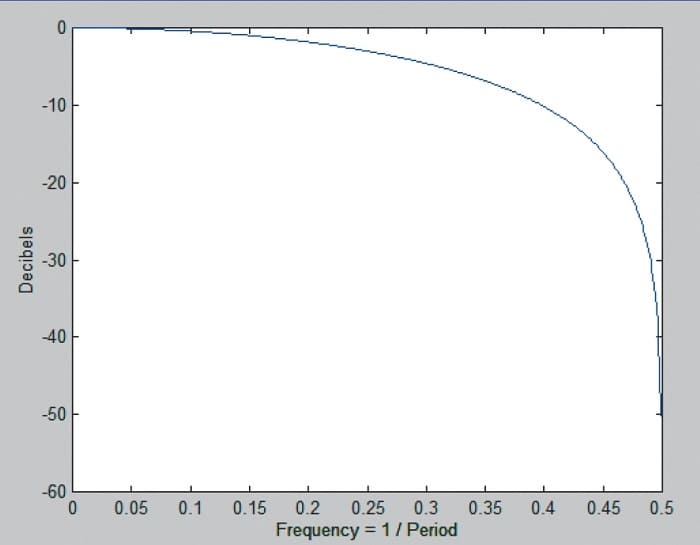 FIGURE 5: FREQUENCY RESPONSE OF A TWO-BAR SIMPLE MOVING AVERAGE. here you see that a simple two-bar moving average can remove much of the aliasing impact.

The frequency response of a two-bar simple moving average is shown in Figure 5. This is an effective way to be sure that aliasing effects are removed. But when it comes to ﬁltering, more is often better, if there is not a price to be paid in terms of lag. Therefore, I also recommend using my SuperSmoother ﬁlter set to a four-bar cutoff period.

If you are using short-term patterns in the range of two to ﬁve bars, the effect of aliasing is dramatic.

A trader can also elect to oversample the data by using a different sample rate. For example, there are 13 half-hour samples in the trading day. So if you use 30-minute data instead of daily data, the data of interest is nearly three octaves below the sample rate. The top chart in Figure 6 shows a four-bar SuperSmoother as the red line while the bottom chart shows the equivalent 52-bar SuperSmoother using 30-minute data. The green dots show the sampled data in both cases. The ﬁlter output using the oversampled data is much smoother.

More important, oversampling enables the trader to create a higher-ﬁdelity waveform closer to the original Nyquist frequency. For example, the cutoff period of the oversampled SuperSmoother ﬁlter was reduced to 26 bars, resulting in a smoothed waveform with less lag as shown in the lower graph of Figure 7.

FIGURE 7: SMOOTHER INDICATATORS WITH REDUCED LAG. Reducing the cutoff period of the oversampled SuperSmoother filter to 26 bars resulted in the smoothed waveform with less lag.

IT MAY IMPACT YOUR TRADING

Market data aliasing is real, but its impact on your trading depends on your style. If you are a trend trader using relatively long moving averages or slowly moving indicators, you can just ignore it. On the other hand, if you are using short-term patterns in the range of two to ﬁve bars, the effect is dramatic and you might want to rethink your approach. Nonetheless, it’s a good idea to be aware that aliasing is real and it’s a good idea to mitigate its effects just by applying a simple two-bar moving average or the SuperSmoother ﬁlter to the data before using any other indicator. More adventurous technicians might want to explore oversampling using intraday data.

S&C Contributing Editor John Ehlers is a pioneer in the use of cycles and DSP technical analysis. He is president of MESA Software. MESASoftware.com offers the MESA Phasor and MESA intraday futures strategies. He is also the chief scientist for StockSpotter.com, which offers stock trading signals based on indicators and statistical techniques.