What we’ve developed in this latest trading strategy is short-term trading at its simplest. Instead of stocks, we focus on the smaller universe of market index exchange-traded funds (ETFs). We also created the system as long-only — no need to worry about borrowing shares of ETFs. And last but not least, we limited the strategy to three simple rules.

Before we tell you those rules, first understand a bit about this trading strategy, which we call Double 7s. We tested this strategy on both the Standard & Poor’s 500 (SPX) and the NASDAQ 100 (NDX) from January 1995 through April 2008. The results over that time period for the S&P 500 were +1,133 points, with nearly 80%of the trades closing profitably. In the NASDAQ 100, the results were similarly impressive. From January 1995 through April 2008, the Double 7s strategy in the NASDAQ 100 yielded 2,822 points, with 79.84% of the trades closing in the green.

These were long-only trades over a period that included a boom, a bust, a low-volatility recovery, and then another bust. Note also the high win rate. This is a characteristic of our trading systems, one that traders who have used our strategies have come to appreciate. Trading systems with high win rates tend to make the trading experience much more enjoyable for the trader. This is because the experience of trading is, by and large, a positive one since traders are making money on the majority of trades.

This also speaks to the issues of consistency and discipline we’ve mentioned. When the day-in, day-out experience of trading is largely positive, the discipline of following the rules and making your trades is easier to abide by. Over time, even the most profitable trading systems can be hard to adhere to if the trader feels like every trade boils down to a 50/ 50 crapshoot — or worse.

If you’re still looking for a profitable trading system for exchange-traded funds that is easy to follow and has win rates of nearly 80%, then it’s time to introduce you to the three simple rules that make up our Double 7s strategy:

And that’s it. We hope we didn’t disappoint you if you were looking for something more complicated, but we believe in letting the market themselves do all the hard work. The Double 7s strategy is a mean-reversion, swing trading method of trading ETFs. By separating out only those ETFs that are above the 200-day moving average, we focus on those stocks that are statistically more likely to move higher after short-term pullbacks. This observation has been at the core of our successful short-term trading for more than a decade and is the first and most important rule in the Double 7s strategy.

Everyone wants to buy short-term pullbacks in uptrends. But many traders get caught up trying to devise a perfect method to deduce when a pullback has sufficiently pulled back. In our testing of the Double 7s strategy, we found positive results with a number of time frames but discovered that the best edges were in ETFs that had made seven-day lows. The compliment to buying on a pullback is to sell into strength. For years, professional traders have insisted that “when the ducks are quacking, feed them,” preferring to sell their positions into strong demand instead of waiting for that demand to subside. We have used a variety of different techniques and tools — all simple and straightforward — to determine when that demand was suitably strong. With the Double 7s strategy of short-term trading in ETFs, exiting trades at a seven-day high tested out to be an ideal compliment to the entry at a seven-day low. 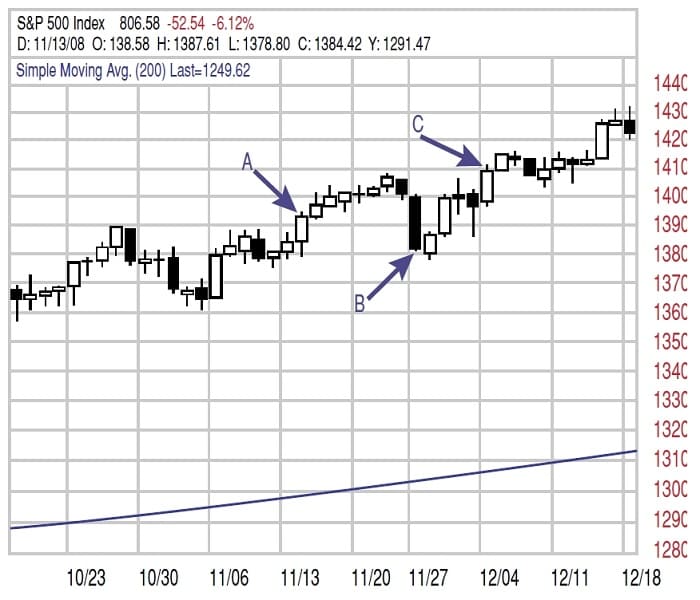 That rally began almost immediately and, five days later on December 4, the S&P 500 was making a new, seven-day high. The Double 7s strategy has us sell our position on the close of this day. The Sso trade would have been just as impressive, if not more so when considered on a percentage basis. Here’s an example in December 2007 with the NASDAQ 100 (Figure 2). Here our market proxy is the QQQQ. Trading above its 200-day moving average, the Q made a new, seven-day high on November 28. It moved higher fitfully before peaking and selling off sharply intraday on December 11, 2007. 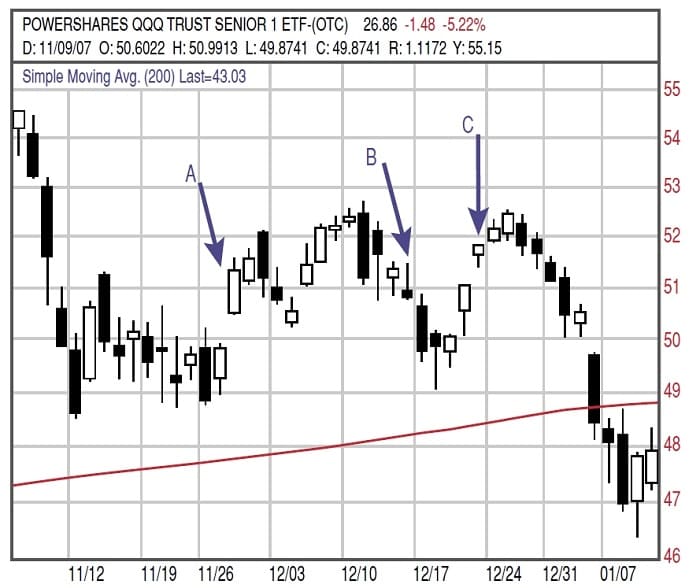 Four days later, with sellers continuing to overwhelm buyers, the NASDAQ 100 made a new seven-day low. The Double 7s strategy alerts us to this buying opportunity and has us buy the Q on the close of the new seven-day low on December 14, 2007. After two days of relatively constricted sideways trading, the Q explodes to the upside and sets a new, seven-day high within five days of our initiating the trade. That is our exit, and as of the close on December 21, the position is sold for a profit.

See also  The Power Of Fusion Trading By Josh DiPietro

Assuming we used the Q as our NASDAQ 1000 proxy, we would have taken our long position on the close of December 14 and exited that trade on the close of December 21 for a gain of more than 2%. More aggressive traders can take the Double 7s strategy further by using options on the SPY and Q. Traders can also use the leveraged exchange-traded funds offered by Rydex, ProShares, and other funds —although, as with options, traders should be aware that additional leverage means a greater potential for loss as well as profit.

One of the more interesting aspects of the Double 7s strategy is that traders can still trade the strategy during the bear market by trading inverse ETFs. Exchange-traded funds like the SDS and the QID provide both 2x leverage and an inverse relationship to the SPY and Q. As such, when the $SPX and $NDX are untradable because they are below the 200-day moving average, the SDS and QID — which as inverse ETFs will be above the 200-day moving average — can be used as a substitute.

The Double 7s strategy is easy to follow. Traders can use price channels to help mark where the seven-day highs and lows occur, letting breaches of those levels signal entries and exits. The Double 7s strategy also lends itself readily to mechanical trading for those who prefer to trade using fully automated systems. The strategy can even be used as a part of a market timing strategy for trading individual stocks and options when the market as a whole is down and stocks more likely to be on sale.

There are plenty of complicated ways of making money in the markets. The Double 7s strategy is not one of them.

There are plenty of complicated ways of making money in the markets. The Double 7s strategy is not one of them. By sticking with ETFs that are above their 200-day moving average, buying them on short-term weakness and selling them into short-term strength, we have created another high win rate, straightforward mean reversion swing trading system that we think more and more traders can benefit and profit from.