Why do opinions on Dow theory so often vary, and why do Dow theory “signals” so often fail? Typically, there is one common denominator that becomes immediately apparent in most articles about Dow theory: too many of the authors of those articles have not studied the original writings of Charles H. Dow, William Peter Hamilton, or Robert Rhea. These original writings and particularly those of Robert Rhea are essential if we are to understand what has come to be known as Dow theory. The only other person I know who has studied the original writings by Dow, Hamilton, and Rhea is Richard Russell. As a result, Russell is the only other orthodox Dow theorist I know of, and he has fought misquotes, misunderstandings, and erroneously written articles about Dow theory his entire career.

NONCONFIRMATION AND THE ONGOING BEAR

I first warned about the Dow theory nonconfirmation, and the impending bear market, in October 2007. There was approximately a four-week period following the October 9, 2007, closing high on the Dow Jones industrials that was a classic “sell spot” in accordance with orthodox Dow theory. It was during this time that I began warning my subscribers and guided them through the developments as we watched the primary bearish trend take root. According to orthodox Dow theory, the primary bearish trend change finally occurred on November 21, 2007. It was then that the stock market barometer first forecasted “stormy economic conditions,” according to Hamilton.

Many market observers misunderstand Dow theory, viewing the violation of the previous lows or the bettering of previous highs to be a buy or sell signal in accordance with the theory. This is not true. In the writings of the founding fathers of Dow theory, the violation of joint secondary highs or lows is clearly considered to be confirmation of a primary trend change in which they would have already established positions at what they refer to as “buy and sell spots.” So the first myth I want to bust here is that Dow theory buy and sell signals do not come once a joint secondary high or low is exceeded. In reality, the violation of these levels serves as confirmation of the primary trend.

As the averages rallied out of the January–March secondary low points, and into the May–June 2008 and even the August 2008 highs, I continuously explained that nothing had occurred to invalidate the establishment of the November 21, 2007, primary bearish trend confirmation. Yet some who do not truly understand Dow theory misinterpret the movement above the February highs as bullish. The most important aspect of Dow theory is the joint movement of the industrials and the transports above and below previous secondary high and low points.

But the February highs were not secondary high points themselves. Rather, they were a high within the overall movement up into the April–May highs, which did constitute secondary points. It was from these highs that the averages moved down into their July secondary low points. Learning to identify what constitutes secondary high and low points is where the art comes into play, and this takes experience that can in part be learned from the writings of our Dow theory founders.

This is only one reason that their writings are so important. I have also identified other methods and developed specific indicators to help identify these secondary high and low points. As you can see in Figure 1, the averages last made a joint price low on November 20, 2008, which served to again reconfirm the bearish primary trend that was established on November 21, 2007. This is not to say that there won’t be bounces, but I believe that the November 20, 2008, low marked the most recent secondary low points. The key is understanding when a secondary low point has been made, what the advance into the secondary high point is telling us, and then identifying the turndown out of that secondary high point. This is an ongoing process that must be examined as it develops. 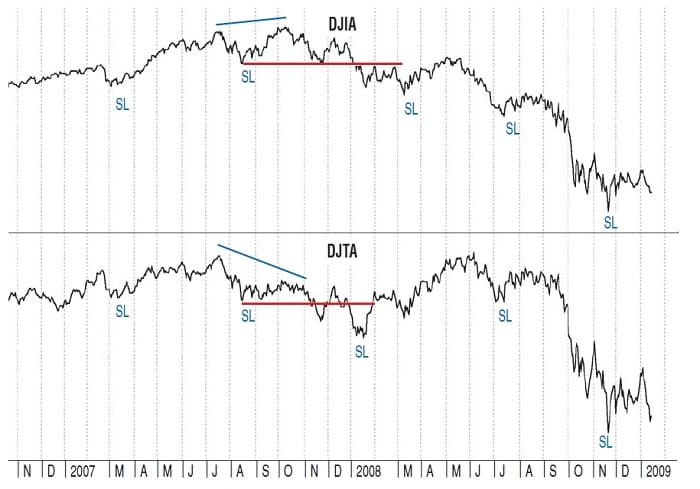 How long will this bear market last? Dow theory doesn’t directly offer an answer to this question, but there are some historical relationships that can be drawn upon. First, it is important to understand that the definition of bull and bear market differs from person to person. My definition is based on the works of the great Dow theorists — Dow, Hamilton, and Rhea. As a result of my study of Dow theory combined with my study of cycles, which are not a part of Dow theory, I have drawn some conclusions about the nature of bull and bear markets. As I read about the bull and bear markets of the late 1800s and very early 1900s, it became apparent that the bull markets that Dow, Hamilton, and Rhea wrote about were the upward movements of the four-year cycle and the bear markets were the downward movements of the four-year cycle. As our country grew, more and more people began investing and, as a result, the bull and bear periods became longer.

Read Book: Divorcing the Dow: Using Revolutionary Market Indicators to Profit from the Stealth Boom Ahead

At the 2000 top, the associated Dow theory nonconfirmation and confirmed primary trend change indicated that the great bull market era had ended. Upon the primary trend confirmation in March 2000, all indications, according to Dow theory, was that phase 1 of a great bear market had begun. In addition, based upon the historical relationships between bull and bear markets, that bear market was slated to run into the 2008–10 time frame, which was 33% to 37% of the preceding bull market. When the rally out of the 2002 low began, it appeared that this was simply the rally separating phase 1 from phase 2 of the bear market. (Refer to my April 2008 STOCKS & COMMODITIES article because according to orthodox Dow theory, the primary trend again turned bullish in June 2003 and proved that price movement above and below secondary high points is far more important than the perceived phasing.)

During this period, the powers that be threw everything they had at the market and in doing so allowed the bear to claw its way out of existence. And when both averages managed to better their 2000 highs, everything changed in accordance with Dow theory phasing. At that time, I said, “This confirmation does not signal a new bull market, but rather reconfirms the existing bull market.” What I meant was that the bull market that began in 1974 was reconfirmed as still being intact when both averages jointly bettered their 2000 highs, and that we had never entered into a true bear market. That was written on February 29, 2007. The advance that followed this reconfirmation carried the averages up into their last joint high in July 2007 and can be seen in the Dow theory chart in Figure 1.

From the July 2007 joint high, the averages moved down into their August 2007 secondary low points. It was from that secondary low point that things again began to deteriorate. As you can see in Figure 1, the industrials moved on to new highs in October while the transports failed to confirm. This nonconfirmation is noted in blue. This nonconfirmation led to the November 2007 decline. With the break below the August 2007 secondary low points (noted in red) on November 21, 2007, the primary trend was once again confirmed as being bearish. That break put the market at risk of finally marking the top of the entire bull market advance that began in 1974 at 570 of the industrials.

Back in 2000, the bull market from 1974 was only 26 years in duration, and one-third of that would have been some eight to nine years, which means that if they would have let the bear market that tried to begin back then unfold, we would now be coming out of a natural bear market bottom in which a real advance could have occurred. Instead, they fought it tooth and nail and were ultimately able to extend the bull market into 2007.

This only served to make matters worse. We now have a 33-year bull market to correct, and we are only one year into the correction, and again, the powers that be are trying to “fix” it. I do not think it can be fixed, as they have only made matters worse; we now face the fallout of the credit bubble, the housing bubble, the commodity bubble, and an even larger stock market bubble, all of which were a result of the “fix” following the 2002 low. It all comes down to this. If we have truly seen the bull market top, then we still have some nine-plus years to go based on these typical bull/bear market relationships, and fighting it will at best only extend the inevitable and make matters worse in the end.