Candlesticks And the Haguro Method By Gary Burton

As technical traders, we must always consult the market. Here’s a method that sets clear support & resistance levels and can be used to trade futures, equities, and forex pairs. In this article I will attempt to give justice to the outstanding observations about market movements made by Seiki Shimizu in his book The Japanese Chart Of Charts. Shimizu’s text documents expected price movements following a particular candlestick shape.

We should look at the market movement itself rather than look at economic policies. The art of candlestick charting started in the late 17th century in the port city Sarkata during the 8th Shogunate period long before forward-looking economic policy was considered as an investing tool. The trader should look at market movements as the ebb & flow of a river of the greater market emotions. These emotions give rise to price formations and patterns that allow you to make decisions, like the cat waiting for the mouse to move. As the cat detects the minute movements of a mouse before it tries to run, so the trader should detect the minute movements of the market and make decisions before the market makes its primary move. The chart only reflects the past movements of the market, and no matter how long you look at the chart it is still correct to say you are unable to predict future prices. As far as wanting to try and predict future movements of the market, the observation of the chart comes closest to achieving this desired outcome.

A study of price movements and the associated psychology behind price movement is a worthwhile endeavor for anyone interested in the markets. Many books have been written about the shapes of daily candlestick bars—with all of the associated names like paper umbrella, hanging man, doji, and so on—and each shape’s implied effect on prices immediately following the candle. These observations do not apply to the weekly chart; they are the realm of the short-term speculator. However, future daily movements, while notoriously and difficult to predict on a 24-hour basis, give way to the much more fluid and predictable weekly price lines in the Haguro method.

Get Candle Charting Essentials and Beyond Course By Steve Nison 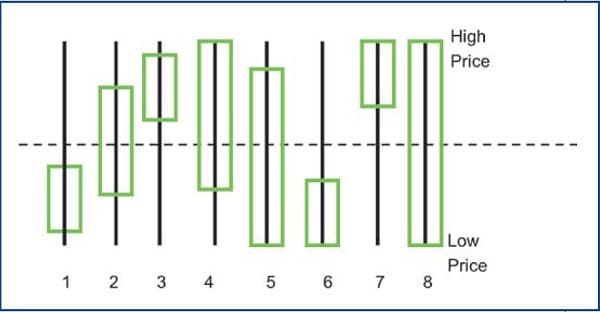 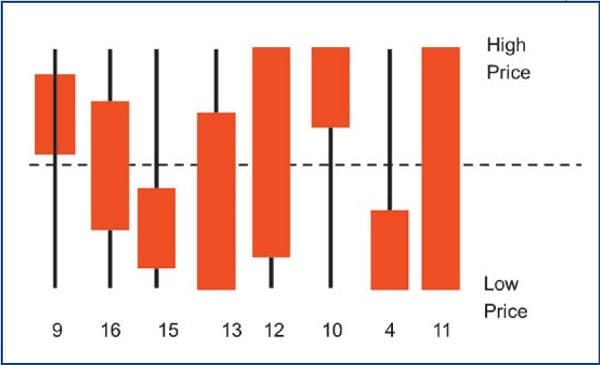 FIGURE 2: THE EIGHT RED CANDLE SHAPES. In candles 15 and 4, the body closed below the middle of the range, whereas the others cover both sides of the range.

It is important to note here that the weekly candle shapes do not have the same trading implication as the daily lines. This is one of the great misconceptions of candlestick charting. For example, you cannot view the candle number 8 as a marubozu strong candle when viewed on the weekly chart, since it could contain three gaps, including an exhaustion gap, when viewed in a daily time frame.

Soldiers in The Battlefield

From the weekly candlestick ranges, the strong trading period is the one with the range and body that is visibly larger than the preceding weeks. That is the soldier guarding the area going forward.

The weakest part of a soldier is considered to be the midriff and if he is pierced there it’ll result in certain death. This happens on the weekly chart, when the Friday closing price pierces the middle of the range of a large candle in previous price movements. It indicates important support or resistance has been broken, and further price movement in the current direction should occur.

The strong trading period is the one with the range and body that is visibly larger than the preceding weeks.

This becomes powerful when trading in the direction of an established trend. You can place trading alerts in these areas to look for potential trade entries.

In Figure 3 is a chart of General Motors (GM), which shows a closing high price being set at $41 in December 2013. I’ll walk you through the various numbered points labeled on the chart. At point 1 you see the first real resistance level of $40.30. It is set at the midpoint of the bearish week during the first week of January 2014. The following three weeks remained bearish, with the midpoint at point 2 set at $37.80.

FIGURE 3: APPLYING THE HAGURO METHOD. Here you see how you can use the Haguro method to identify support & resistance levels and use them to help determine future price movement.

The support & resistance levels of the dominant Haguro candle will remain until they are broken. This can take several months or years. This is again demonstrated with the recent retest of the current $33.10 support level. Resistance remains at $36.25 (point 5) and $37.80 (point 2).

Where the candle shape shows up is important. Since the weekly chart is the sum of five trading days and has an important two-day break before the next trading takes place, the weekly candle can give an important signal to future price movement. For example, if you find the weekly shape candle 3 in Figure 1 in a high price area, it can give a warning of lower prices two weeks prior to a reversal. For example, the chart in Figure 3 shows a clear warning of a price reversal in November.

The Power of Haguro

The Haguro method of analysis has shown itself to be a robust method of setting support & resistance levels with simple clarity. I have used this method in my day-to-day analysis for many years (it is now available as a free add-on in MetaStock) and it continues to reveal its power in today’s volatile markets. Although it was developed for the futures markets, it has shown its robustness in equity and forex trading.

Newer Trading Forex: Planning Your Strategy By Imran Mukati
Back to list
Older Sell With Conﬁdence: The Green Line By Ron Jaenisch