Who hasn’t harboured the thought of reaping massive proﬁts from a big price move in a short time? Despite the notoriety associated with trading breakouts, it remains one of the most basic concepts in trading. A breakout typically occurs when the currency price moves beyond a period of consolidation or trading range, or when the price penetrates above or below an established price level, which can be a resistance or support level, resulting in a follow-through of prices past those levels, whether temporarily or permanently. The price movement past a breakout point can either be a short or a more sustained affair, and that may depend on the time frame of prices that you are looking at.

Even though big market players tend to fade breakouts, and it is better for retail traders to side with these players, it does not mean that trading breakouts is entirely a bad idea. Breakout trading does have merits, and a different set of rules as compared to fading breakouts. It is better to first assume that any breakout from a significant level is false, as false breakouts are more common than successful breakouts. However, there are times when trading breakouts can be very profitable, even though breakouts are known to be technically unstable. Hence, in order to trade breakouts with a higher probability of success, you have to incorporate as many market factors as possible, including both technical and fundamental analysis, to get a better feel of the current overall market sentiment.

The problem of lack of volume data

While volume is critical to the trading of breakout in other asset classes like stocks or futures, in the forex market traders lack the knowledge of volume since there is no central exchange to monitor all the transactions that have gone through or are going through. Lack of forex volume data is a huge disadvantage to forex traders as volume often reveals where the market is positioned or is positioning, and is often an important criteria of any breakout trading strategies as successful breakouts are generally accompanied by a rise in volume. In view of that, you have to rely on several guidelines so that you can position yourself for a potentially good breakout.

When a price attempts a breakout of a significant support or resistance level, it signals a change in the balance of supply and demand, and such a change may be triggered by a change in market sentiment, or a renewed resolution of bulls or bears of a currency pair, or the unfolding of certain fundamental events. Successful breakouts must be accompanied with a strong surge of momentum in the direction of the price breakout.

Price breakouts can be categorised into two main types:

According to the basic tenet of technical analysis, one should always assume the underlying trend to continue unless proved otherwise, and it is no exception in this case.

In a continuation breakout, currency prices break out of established price levels to resume the underlying trend, by climbing higher in a continuation of an uptrend, or by falling lower in a downtrend. Usually, a breakout occurs after a period of consolidation in which when buyers and sellers of a currency pair regroup and contemplate the next price move (See Figure 8.1). 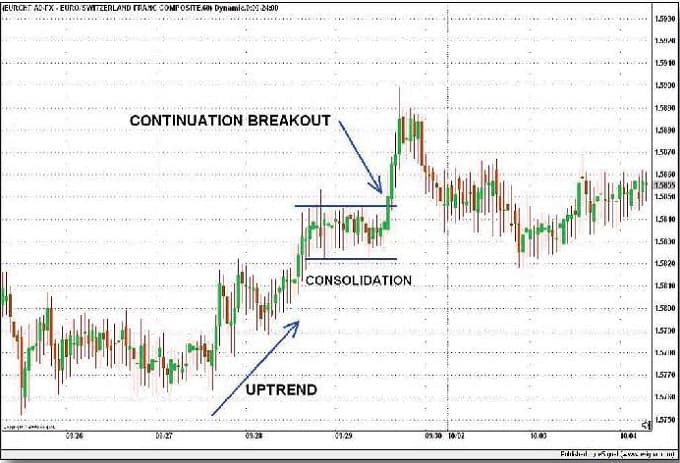 A continuation breakout is seen on this 60-min chart of EUR/CHF as prices broke out from a short period of consolidation to resume the uptrend.

Sometimes, a current trend may be near its last stage, and could be in the process of reversing as the hype fuelling the trend is extinguished. In such a situation, a breakout could lead to a trend reversal and the beginning of a new trend, hence it being a reversal breakout (See Figure 8.2). 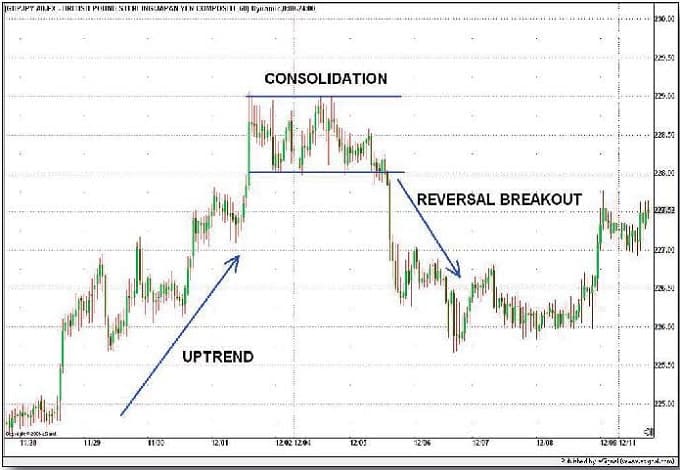 A reversal breakout is seen on this 60-min chart of GBP/JPY as prices broke out from a period of consolidation to reverse the trend from a prior uptrend to a downtrend.

However, there are many times when prices do not move in a straightforward direction (whether continuation or reversal) in the real trading world. Traders observing a price breakout could be treated to a display of the infamous false breakout which all breakout traders fear and detest. A false breakout occurs when the price has pierced through the support or resistance level, but then retreats back into the previous price zone, thus stopping out most breakout traders if their stops are just below the support or above the resistance level. Institutional players are often the culprits behind false breakouts as they manipulate the currency price past common stop levels so as to deliberately clean out that side of the market.

The worst kind of breakout is the whipsaw type, whereby prices move out of the price range, then back into the range, and then break out of the level again, stopping both breakout traders and faders at least once (See Figure 8.3). A whipsaw breakout usually occurs when there is lack of momentum behind the price move or when the breakout is small and weak. What makes a breakout unsustainable is the lack of subsequent waves of buyers or sellers of a currency pair to generate more buying or selling interest in an upside or downside breakout respectively after the first wave of buyers or sellers has jumped in shortly after the breakout. Sometimes, the price action can be so choppy that it is better to stay out of the market. 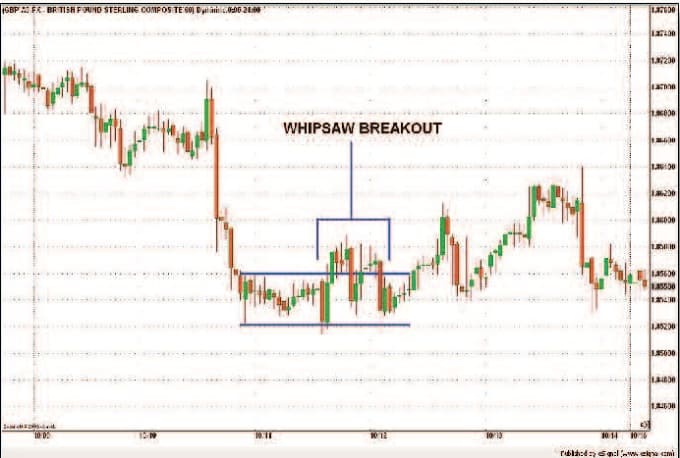 With so many different outcomes of a breakout, all breakouts must be treated with some degree of suspicion, even if you have iron-clad reasons not to doubt the direction of your trade, they all carry some risk of failure. That is when reasonably placed stops can help preserve the rest of your capital when a price breakout does not go your way.