The study of Gann methods leads one down an interesting road, a path that seems neverending. The Gann student is exposed to a great deal of esoteric information. The esoteric side of the Gann material can be confusing and is often passed over or misunderstood. To make use of any of the higher principles one needs to bring such principles to our plane and ground them in our world. Traders often speak of trends, seasonals, swings and pull backs. On most of their computer screens can be found indicators such as stochastics, RSI, and moving averages. It is easy to lose site of the connection between our plane, the trader’s plane and Gann’s plane, the esoteric plane. To most these two planes are totally unrelated, but to the true Gann student they are totally integrated.

The ﬁrst step in grounding our cosmic principles begins with a proper understanding of the concept of time. To distinguish the proper concept from the second hand on a watch or a calendar on a wall we will call this new concept “True Time”. The question at hand is reduced to, “What is time, really?” One popular answer might be, “365.2422 days = 1 year = 12 months = 52 weeks.” No, these are just measurements or names for “True Time”. What is a day? One day is the amount of time between successive sunrises. Yes, this is true but what causes the sun to rise? The movement of our planet earth spinning on its axis. The keywords of the last statement are planet and movement. These two words are the basis of any and all deﬁnitions of time. Another way to state this principle is to say, “Time is planetary movement.”

There is nothing mystical about using planetary movement to mark time. This method has been done for thousands of years. Sure, the names have been changed, Instead, of one earth revolution around the sun, the term one year is used. Instead on one lunar revolution around the earth the term month is used. Yes there is a bit of fudging going on, but a quick study of history will prove these cycles are cosmically related. The sharp student will recognize the names Saturnday, Sunday and Moonday. Actually they are called Saturday, Sunday and Monday. A further study will give other planetary correspondences to the days of the week.

If indeed planetary movement is time (True Time) the deﬁnition of time cannot be limited to the movement of the sun, moon and earth. One must include all other heavenly bodies in the deﬁnition of true time. Examine some of these “True Time” factors:

The “True” deﬁnition of trend is: “The general tendency or course of a cycle of larger degree.” See diagram 1. This larger degree cycle appears as a straight up move because the trader’s eyes are ﬁxed on the shorter time frame and perceives a trend. The trader is unaware of the larger cycle because of his limited perception and is often unaware of its eventual end. Swings often occur that move in opposite direction of the trend. After a short while prices reverse and move in agreement with the trend like cycles within cycles or wheels within wheels. To deﬁne trend one only needs to cross-reference the larger time frame or cycle to determine its position. 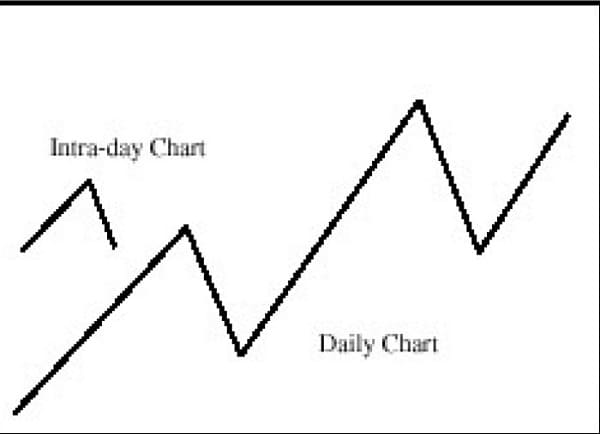 It is important to remember our deﬁnition of time and its relation to trends and cycles. The numbers discussed earlier are of great importance in understanding the working of cycles and trends. Also, remember the geometric divisions of the natural planetary cycles. Astrologers use terms like squares, conjunctions, trines and oppositions. These are nothing more than the divisions of the whole. For example, the Moon whole is roughly equal to 28 calendar days. The square is equal to 7 calendar days. The trader will recognize this as 5 trading days or 5 bars on the daily chart since there is no trading on Saturdays or Sundays. 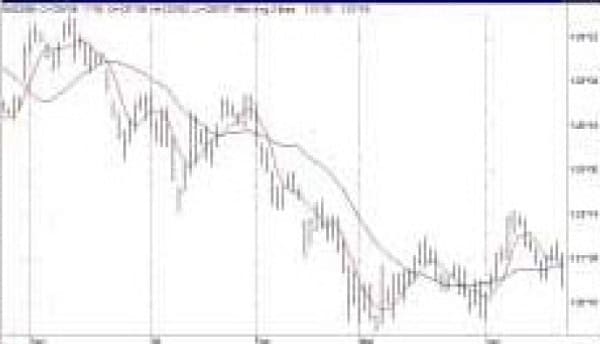 Figure 3 shows an example of “True Time” trend and cycle combinations. First, the 20 bar and 60 bar moving average is consulted for trend indication. Remember 20 bars equal roughly the moon and 60 equal roughly mercury. When the moon movement is lower than mercury this cycle is down. This is easily seen in ﬁgure 3 as the faster moving average is lower than the slower moving average. A trader that trades only with the trend will only enter short positions during this period. In order to trigger a short position the 5 bar and the 21 bar stochastics are consulted. When the faster quarter moon or 5 bar stochastic crosses below the slower 21 bar moon stochastic a sell signals is produced. A trader following the trend could trade this signal many times while the trend remains negative. In this case 3 such signals are given. If more trades are sought the trader needs simply change the inputs or look at short time frames. Changing time frames and data is a matter of personal preference. All traders should seek the time frame in which they are most comfortable. 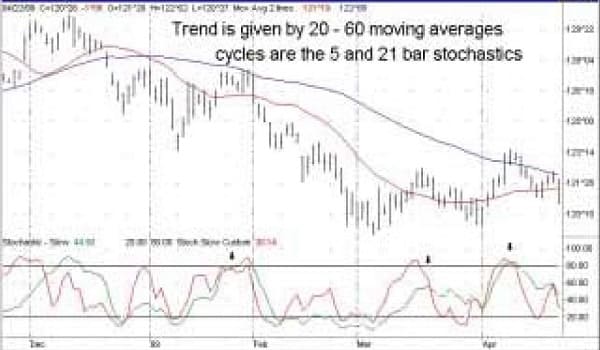 Traders with an open mind will apply the principles discussed and discover even better cycle combinations than those shown. The esoteric side of Gann will not be some distant ideas for only far out newsletter writers. The cycles when applied to simple everyday indicators become much clearer. A close friend noted that once cycles are seen in this way they cannot be denied. One who discovers this method of viewing “True Time” cycles will never look at an indicator or price chart the same again.

John Berends is a Commodity Trading Advisor and President of Time and Price Trading.

Newer Rule #1 in Treasury Bonds By Larry Pesavento
Back to list
Older The Golden Cycle By Eric S. Hadik