George Wollsten: Expert Stock and Grain Trader $23.70
Back to products

The query often arises as to whether there are any ephemerides available before 1850. There are a great many events of astrological interest that have taken place where the use of old ephemerides would be of the utmost value.

Various astrologers occasionally produce horoscopes such as the “Manhattan Purchase” or the “Foundation of the City of New Orleans.” There exists no possible check for the reader as to the accuracy of such horoscopes. The lengthy interpretations might be at fault due to primary errors. The author of this article happens to have a complete set of ephemerides, beginning with the year 1536 and practically without a year’s interruption until the present, from one day to the next. The years 1536 to 1720 are written in Latin, as well all scientific work of that period. They were calculated for the Meridian of Bologna, Italy. Those familiar with astrological terms should have no difficulty in understanding these tables.

To understand some terms that may appear difficult, let us proceed to examine the table itself. In this picture, we first note the year for which the ephemerides were prepared, 1623. On the left margin, we find the month, Martius, meaning March. Below the month we find: Anni Veteris, pertaining to old years, or the Julian Calendar; Anni Gregorianum, meaning the calendar of our present era. 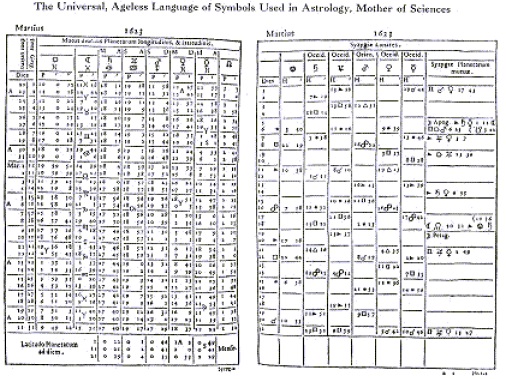 “Latitudo Planetarum ad diem,” on the lower left margin, means the latitude of that day, i.e. the 1st, 11th and 21st of the month, whereby the A and S, respectively, in the Venus and in the Mercury columns, means: Venus is ascending toward the equator and Mercury is Meridionalem on March 1st at 0.49 but by the 11th it is septentrionalem at 0.42, having crossed the equator.

The right page contains as heading, “syzygiae lunares” – lunar aspects; and at the right margin we have “syzygiae mutuae” – mutual aspects. In each instance, the time is given when the aspects occur. It is given in astronomical time, from 0 to 24 hours. When we consider that these ephemerides were produced over 300 years ago, we note the clean-cut arrangement, the exactness of the work, the legibility of the print, — in short, a splendid ephemeris….