A variety of techniques attempt to forecast prices in financial markets. However, relatively few deal with the most important element in financial market timing, i.e., time. Traditional cycle analysis is the most commonly used of these techniques, but even the so-called experts on this subject acknowledge the great limitations of their approach. Cycles (or more correctly, rhythms) tend to suddenly disappear, only to reappear at a later date with phase shifts from their original pattern. Contemporary cycle analysts cannot explain why cycles “disappear”, why they reappear with a phase shift, and a variety of other characteristics that will be explained in this course.

To begin the analysis of the dimension of time it must be understood that financial market movements are defined within the limits of radii vectors. These vectors allow analysts to expand their thinking beyond one dimension at a time, i.e., only price levels or only time values, and to START VIEWING PRICE-TIME AS A SINGLE UNIFIED ELEMENT. For, as will be shown in this course, PRICE AND TIME ARE INTIMATELY CONNECTED.

THE PTV HAS CONSTANT LENGTH AND DEFINES THE INTERVAL OF OPERATION WITHIN SPECIFIED MARKET CONDITIONS.

CALCULATION OF THE PTV

Chart I.A is used to demonstrate how the PTV is calculated. On this price-time chart the time distance between the two points labeled B and C was 131 trading hours.3 The price change between these same two points was 195.9 points. Therefore, using the equation from Figure 1.1, the PTV, BC, is calculated to be the square root of (1312 + 195.92), which equals 235.7. This technique is repeated for each of the PTVs shown on Chart I.A, and the results are contained in Table 1.1.

Tables similar to Table 1.1 will be used throughout Part I of this course. They contain the data used to calculate all PTVs. It is highly recommended the reader reference Appendix E at this point to avoid any possible confusion about how the data used in this course is collected or calculated. If the reader is not interested in verifying the data used to calculate the PTVs, then the only necessary part of these tables is the last column, which contains the final values of the PTVs. For example, in Table 1.1 the first row of data shows the PTV, AB, to equal 230.6.

When the PTV values from column eight of Table 1.1 are studied, one of the first things noticed is that they are all approximately the same length. The only deviation occurred at the bottom labeled F (radius vector DF = 219.4), which was caused by the overlapping radius vector EH. On Chart I.A note that F lies on the line connecting E and H. 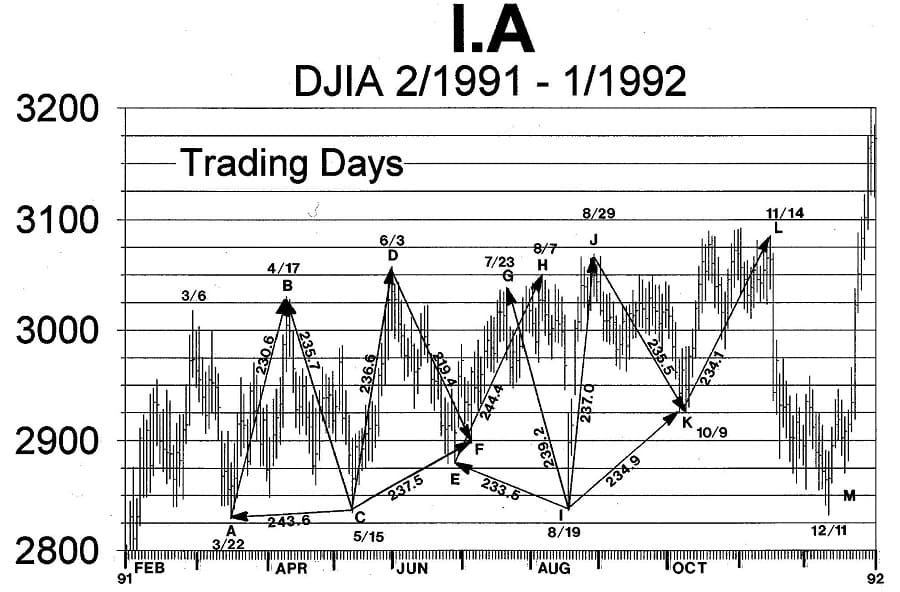 One reason why market analysts have failed to notice that all these market movements were equal in length is that the scales of the price and time axes must be just right in order for this phenomenon to be immediately visible on a price-time chart. Specifically, the price axis must reflect one unit of price for each unit of time.4 As the scales deviate from this one-to-one relationship the appearance of the vectors will be more and more distorted from their actual size. To make this clearer, refer again to Chart I.A. Notice that radius vector CD appears to be longer than radius vector CF. However, calculations have proven they are equal in length. The distortion is caused because Chart I.A is not  “squared out”. If the time scale of this chart was stretched out these vectors would appear to be closer in length. Regardless of the scales used for the two axes on a chart, by employing the technique described above the actual length of the radius vector is determined, and the graphical approach is unnecessary.

PTVs ROTATE AROUND A COMMON CENTER

On Chart I.A the points “C” and “I” hold special significance. These two points represent the center points about which these two radii vectors rotate in a clockwise direction. The “C” radius vector starts with CA, sweeps through CB, over to CD, and finally terminates with CF. The “I” radius vector starts with IE, sweeps through IG, over to IJ, and finally terminates with IK.

An interesting concept is that these two rotating radii vectors have their beginning points defined before their center points have been reached in time. For example, at point A the radius vector swinging from A to B is already moving within the limits of the radius vector centered at point C, EVEN THOUGH POINT C HAD YET TO OCCUR IN TIME. The following radii vectors are equal length:

The values used for the calculation of these radii vectors are contained within Table 1.2. Similarly, Table 1.3 shows that the radii vectors rotating around point “I” have equal lengths:

THE PTV ANGLE DEFINES THE EXTENT AND DURATION OF A MOVE

In Figure 1.2 the PTVs OA, OB, and OC are all equal length. OA advanced very quickly to its maximum length, i.e., T1 is a very short time interval; consequently, the price component of OA, P1, is very large.

Table 1.3 : PTV Calculations for Vectors Rotating About Point “I” on Chart I.A.

PTV AND THE MUSICAL SCALE 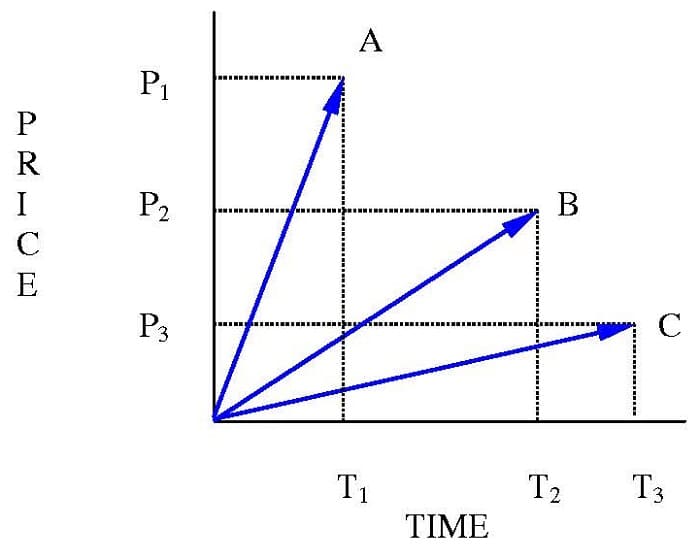 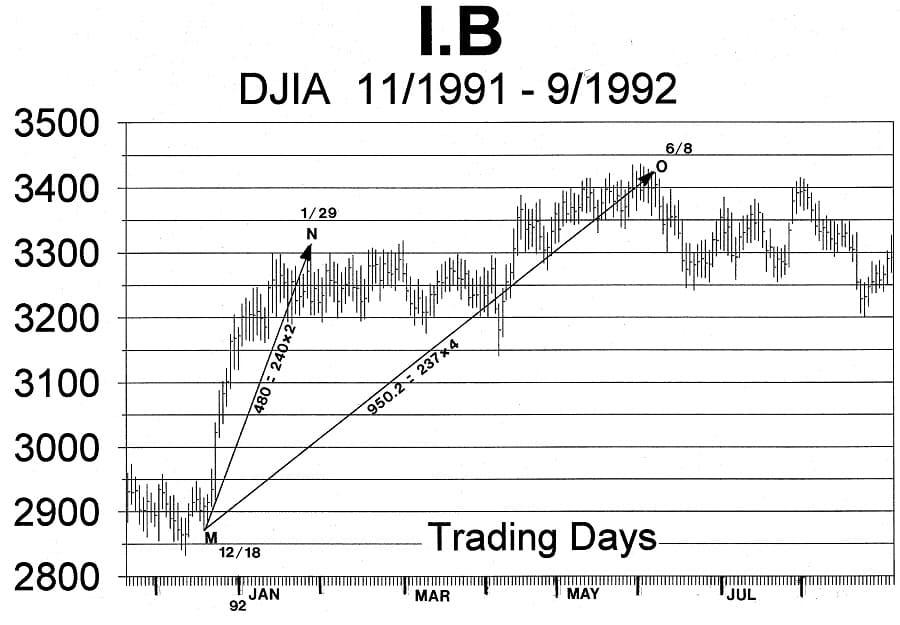 PTVs CAN EXTEND FOR CENTURIES

Application of the PTV is not limited to daily charts. In fact, there is no limit to how large (or small) a PTV can be. For example, Chart I.C is a chart of the stock market from 1929 to 1966, where the PTV, AE, is calculated using weekly data to be 1997 price-time units in length. The values used for this calculation are shown in Table 1.5. This PTV will be used in later lessons to show the geometric structure during this time period. 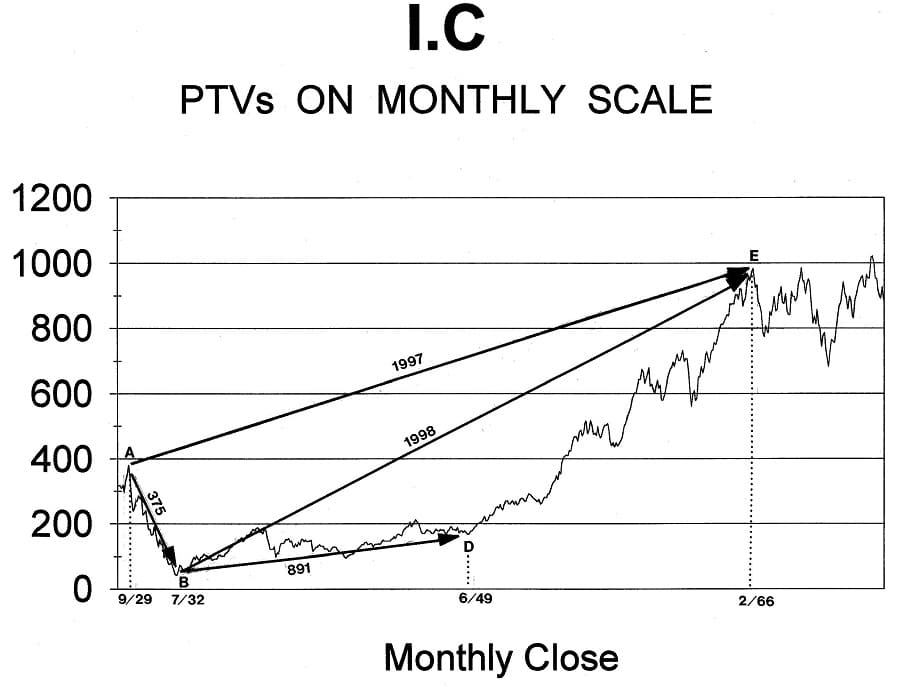