A Glimpse Into “Market Waves” By Robert Saperstein and Thomas Gautschi

Complementary technical tools are an important adjunct to the primary Elliott Wave analysis that is used to generate trades. This was demonstrated in our previous article on Compuwave in the August/September 1988 G&EW, where standard computer generated technical studies are used to help conﬁrm the current Elliott Wave count. Now with the development of the widely used Market Proﬁle analysis, new insights into analytical and trading techniques can be gained in conjunction with Elliott Wave analysis, to form the concept of “Market Waves”. This article will illustrate one particular application as it was used in the generation of day trades in the Bond market.

The accompanying 30 minute chart of June Bonds covers the rally from 86-09 to 89-12 in late March and early April, 1989. Notice that the chart contains only the action of the high volume daytime session. We feel this presents the cleanest patterns for wave analysis, and it is important for the detection of gapping action from day to day. Elliott Wave analysis is intended to gauge the market’s patterns as the mass of market participants swing from psychological extremes of pessimism and optimism. Until the evening session achieves enough volume to adequately reﬂect such mass participation, it will be excluded from our wave analysis.

From a wave perspective, the initial rally from 86-09 to 87-18 had the outline of a 5-wave advance on the chart. The pullback to 87-02 was an exact 38 percent retracement before the rally continued to 88-16. The next pullback to 87-30 again retraced exactly 38 percent of the preceding rally from 87-02. So even with somewhat sloppy internal structures, the two perfect Fibonacci retracements implied with a good level of conﬁdence that the market had created waves 1 through 4 of an impulsive move, and that a ﬁfth wave rally to a new high would follow. Off the fourth wave low of 87-30, two standard ﬁfth wave targets could be generated. Wave-5 being equal to wave- 1 would project 8907, and wave-5 being 62 percent of waves 1 through 3 would project 89-10. 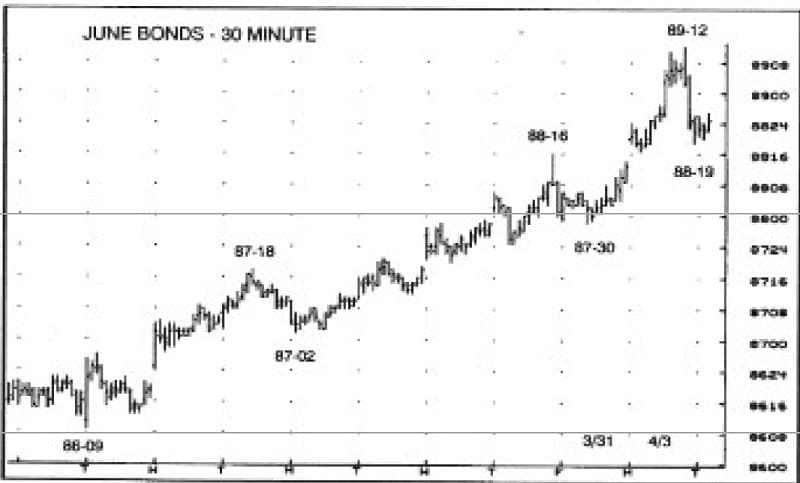 On the morning of Monday 4/3, the market gapped up at 88-20 in what appeared to be the middle of the ﬁfth wave headed for its targets. With one of the standard Compuwave techniques being to buy overt gapping strength, this brought about the trade of buying the gap up, with a stop at 88-13, one tick below the previous day’s high. The objective for patient traders would be a move to 89-06 to liquidate the trade in front of the ﬁrst ﬁfth wave target, to capture over a 1/2 point gain. With the upper ﬁfth wave target at 89-10, the trade could then be turned around to sell at 89-09 to catch an expected downside retracement. The opportunity to do this occurred within the last hour of the day, and conﬁdence to do it was provided by the Market Proﬁle. For those new to Market Proﬁle, the two additional charts are the proﬁles for 3/31 and 4/3. Each 30 minute time period is denoted by a letter, starting with Z,$,A and going through L. The ﬁrst two periods comprising the ﬁrst hour of trading are known as the initial balance period, and it is shown by the solid line closest to the letters. The concept of a “failed auction” occurs when one of the periods extends the range of the initial balance period by one tick, and then the market reverses to take out the other end of the range by two ticks or more. This creates the failed auction at the initial, unsuccessful range extension. This implies that within one to ﬁve trading days, the market should return to the point of the failed auction. The charts show that we had two failed auctions in a row. The ﬁrst one happened at 87-30 in the D-period on Friday 3/31, and the second one happened at 88-17 in the Aperiod on Monday 4/3.

Relating this to the concept of selling at 89-09 into the upper ﬁfth wave projection, the trader knew that Monday’s failed auction at 88-17 would beckon the market back to that level, not to mention the one at 87-30. The 4/3 failed auction was actually satisﬁed precisely at 88-17 four days later. Nevertheless, on that Monday after hitting 89-12, the ﬁnal hour saw a selloff down to 88-19, providing plenty of room for a quick and proﬁtable day trade on the short end also. This provides a graphic example of one of the many ways that the use of Market Waves analysis can add to an existing Elliott Wave arsenal of tools to increase trading conﬁdence and effectiveness.