Using Holography to Trade the Markets By Kevin K. LaRocca

Anyone who has studied the commodity market for a period of time has had an underlying sense of an order to the market, but they have fallen short because their approaches limited their scope of the full picture. Most of these approaches have exposed portions of this order, but have failed to reveal the complete picture. In the past few years a new breakthrough in scientiﬁc technology has been developed, enabling us to accomplish such a feat. This major breakthrough is the science of holography.

The word ‘holography’ is derived from the words “holo” (complete) and “gram” (message). As the above words indicate, holograms capture, through a pictorial process, all the visual aspects of an object. In other words, it presents objects in a three-dimensional photographic format. A standard photograph, in comparison, merely collapses a three-dimensional object into a two-dimensional plane. It is through the characteristics of this unique photographic process that we are able to expose the true order behind all market movement. In order to understand how holography is utilized to predict future turning points in the markets, we must ﬁrst examine the characteristics of a hologram.

Holography is different than traditional methods of three-dimensional presentation because it utilizes laser technology. It is a simple process of photography recording the patterns formed by two interfering sets of light waves that are reﬂected off of an object. One of these must be a reference wave. It is this reference wave source that will ﬁnally be used to reconstruct for the viewer the originally recorded scene. These interfering sets of light waves are recorded on a special plate designed to capture and record the waves at the angles at which they are reﬂected. By simply shining the reference laser through the negative plate, the original wave patterns are reconstructed and the object is once again seen in its three-dimensional form. Without the proper light source, the negative plate appears as a meaningless pattern of swirls.

Only with the correct reference wave, can the disorder be brought into perfect order. Perhaps the most unique characteristic of a hologram is that the whole image can be seen through any of its individual parts. For instance, if one were to view a hologram of a horse, and were to cut one portion of the horse (ie, leg) and then enlarge that section to the original size, one would not see an enlarged leg, but instead, a picture of the whole horse. Like the negative plate of a hologram, the action of the commodity and stock markets seem to be a picture of intermingling wave patterns and, like holography, there are also two distinct light (wave) sources which govern their behavior. These two sources remain constant, and will never change, for without them, there would be no price ﬂuctuations. 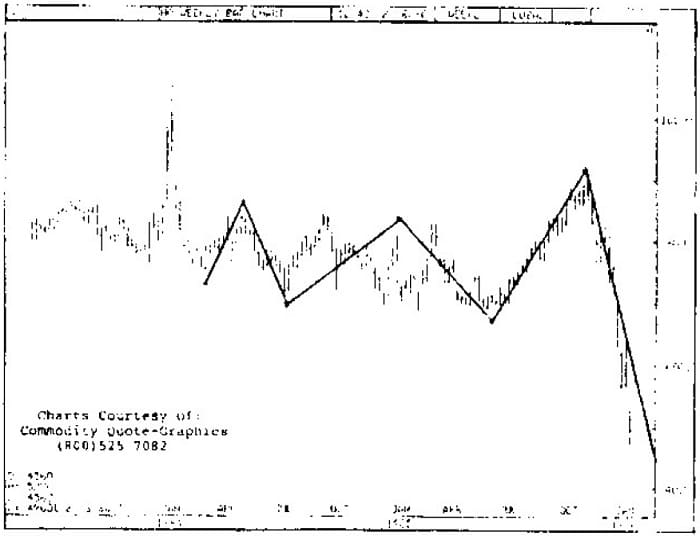 Once it becomes clear what these two light sources are, we then have the ingredients to reconstruct a hologram of the commodity and stock markets. Like the negative plate of a hologram, the true order of the markets can be brought into view only through the use of the proper reference wave. That is, order, from what appeared to be disorder. As a result of this methodology, we are now able to observe the markets in three-dimensional format which not only exposes their patterns, but also where all major and minor turning points will occur in the future. We also know whether it will be a top or a bottom. It is essentially a window into time.

Just like a hologram, we do not need the complete historical price action for a particular market, in order to ﬁnd the pattern. Through a specialized process, I am able to take a small segment of the price action of a particular market and reconstruct the complete pattern. Once this pattern is found, it should remain constant, no matter how far into the future we go. Figure 1 is a weekly chart of heating oil prices from 1983 to January, 1986. The lines super-imposed on the chart represent my predicted turning points for this designated time period. As you can see, on this weekly chart, my predicted turning points occurred within a few weeks of the actual turning point. This shows the trend direction and the duration of the move. In order to narrow in on the actual day that a turning point will occur, I will apply the holographic process to a daily chart, as shown below in Figure 2. 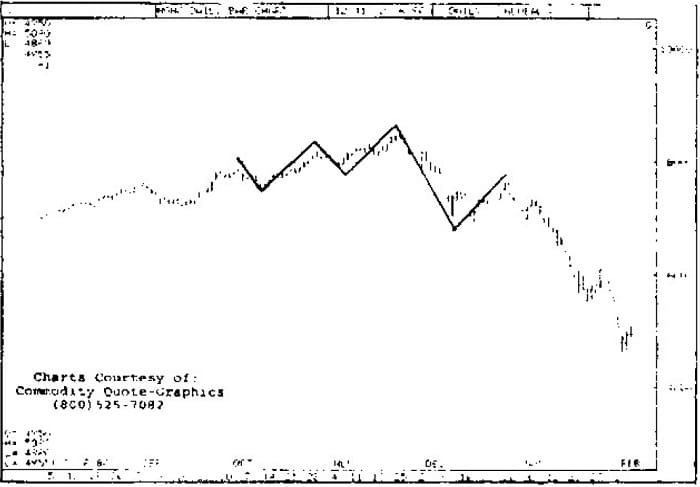 On the weekly chart (Fig. 1), I predicted a top to occur on November 22, 1985. Knowing that I would be close to within a few weeks for that predicted point, I would look for a top during that time period on my daily chart (Fig. 2). This predicted point also occurred on November 22, 1985. The actual top in the heating oil occurred on November 23, 1985. By applying the holographic process, I was able to predict, within one trading day, when a major top in the heating oil would occur.

6 thoughts on “Using Holography to Trade the Markets By Kevin K. LaRocca”