Harmonic Vibrations $14.81
Back to products 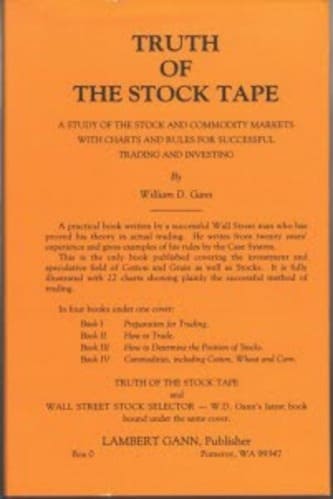 Time Factors In The Stock Market contains no bulky chapters devoted to how to place orders, how orders are executed, commissions, etc. The inexperienced trader may very well master the contents of this work easier than the experienced trader who may burden himself or herself with prior beliefs and opinions.

A few words by way of introduction to this work may be necessary, since it deals with a technical subject and the scope of it cannot be readily understood by the casual reader. It is essentially intended for investors and traders in the various kinds of commodities traded on exchanges. To the chart reader it is particularly informing in that it reveals the more scientific part of the subject and shows the mathematical base underlying the lucky hits to which many of our chart readers have undisputed claim. The general scope of this work embraces all that is essential to the art of scientifically detecting direction and distance of swings.

This is a field practically foreign to the average trader and investor. Attempts have been made to partially reveal still more remote truths behind stock and commodity movements, but their explanations become so involved that it is wiser to train our thoughts along simple lines at the present time. Only through serious study of the various phases and underlying laws of Nature, can success be attained in market operations.

I trust to have left no point untouched that would help in grasping the laws of motion whatever sort they may be. Day after day, when we speak to different people we make use of practical, applied psychology. Instinctively we try to ascertain their thoughts and reactions so that we may draw concise Sioux to account for their behavior. By such processes, we can form opinions as to their knowledge and character. This type of psychology constitutes an essential part of our associations with everyone.

Depending upon personal ability keen observation and individual conditions we can advance to a certain degree in this science of judging men. Without such practical experience, such applied psychology, neither jurists nor businessmen can secure the necessary advantage that brings any endeavor to a successful close. To understand the actual process of forming these judgments, we find that two distinct methods are used, one being as essential as the other – namely, experience and thought, or empiry and speculation. These methods are of prime importance in forming judgments and entail two distinct mental operations.

Only by joining both operations can a complete judgment or decision result. The more experience a man has in finding related occurrences, similar mental pictures, or similar events this mind the more he is apt to group them correctly in correlation to past experiences and the more sound will be the resultant judgment. It is almost impossible to picture a four-legged horse walking on three legs. Should you think of a horse walking, past experience has convinced you that the animal called “horse” has four legs; not three, nor five. Moreover, you know that it walks on four legs, with the possible exception of a horse that has accidentally lost a limb or one that has been trained for a specific purpose, such as a horse in a circus. Similar comparisons can be made with other animals. in fact, with anything alive.

The same results occur when treating the abstract. When we speak of the abstract, we mean the mental action or reaction of the human brain. Suppose one asks about the weather. It would be absurd to believe or blink that a rational person would begin reciting a poem. In answer, he will invariably concentrate on thoughts of clouds, rain and sunshine. This fact is based on the important law which states that equal causes produce equal events. Every event has an underlying cause, else no event could occur.

As a further illustration, let us consider the case of a man who has an accident. We will assume that he crossed the street against a traffic light and was hit by an automobile. This accident would not have occurred if he had not crossed the street while the light was against him. His own decision to cross the street, contrary to accepted traffic laws was the cause of the accident. The direct cause was the car hitting him. It is obvious that if he had crossed the street against the light and with no danger in sight he would have surely crossed in safety. The direct cause of his accident was his decision to take the risk of crossing at the wrong time.

Naturally, the important question arises – was it necessary that he should cross the street to meet with an accident, or could he have avoided it? A very good reason must have caused him to cross the street against the light, or else he would have waited for the light to change. It can be assumed that his mind was clear and normal and that no attempt was made to become involved in an accident.

Nevertheless, the conditions under which he crossed the street caused the resulting event of the accident. Were the same conditions again equal and present, and should this man cross once more, the same occurrence would take place, precisely as it did in the past. If a trader buys a stock while the market is a downward trend, he suffers a loss. Therein we see the parallel; the trader did not watch the stop light. The same conditions recur frequently, and the trader may react in the same manner, again and again, with attendant losses. This will only cease when the trader begins to pay attention to what may be termed “market stop lights”.

Everything possesses certain characteristics peculiarly its own wherein it differs from everything else. There must be a reason for this singular difference, for this being what it is and not something else that it is not. No two men are alike. No two stocks are alike. Not even two cars of the same manufacture are alike even though they seem to be so superficially. Although each object has its own particular peculiarities, its own individuality, yet it has one thing in common with all the other objects in this world; it strives to remain what it is and to stay where it is, unless some external influence causes it to change. The same applies to an object in motion.

Any object, once placed in motion, will remain in motion until some outside agency or influence increases or retards this motion. A rock should remain on a hillside forever unless some external influence dislodges it; then it may roll away. This same rock then gradually slows down until inertia is reached once more.