In this study I have tested all possible two, three, four, and ﬁve-day close to open patterns for the T. Bond Futures market from 1978 to 1987. Three items are provided to explain the information. 1) A listing of patterns (Table A). 2) A graphic display of a pattern (Chart B). 3) A chart of June Eurodollars with examples of two of the patterns (#5:(—)), (#12:(+++)),( Chart C.) The Eurodollar chart is used in place of T. Bonds to display an actual day session open. The chart service used shows T. Bond night session opens on the daily bar chart. This study should be used in conjunction with day session opens only. 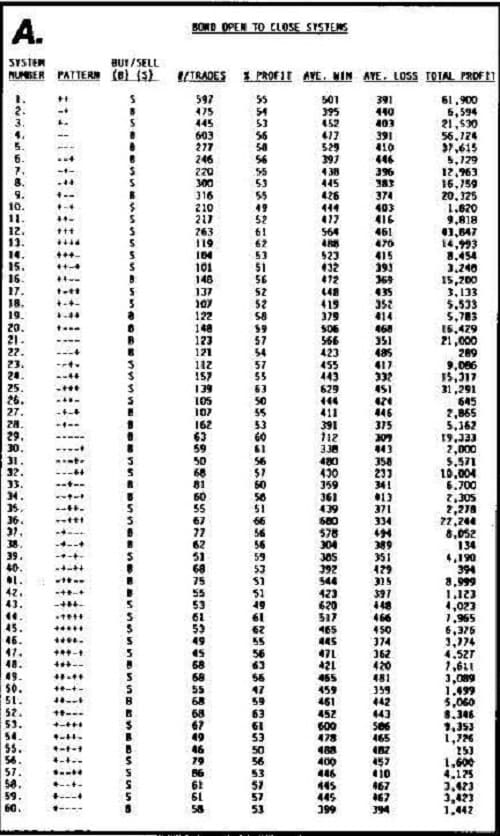 The primary objective of this study is to determine whether an intraday bias exists from open to close given the previous price pattern. A secondary objective is to define proﬁtable trading systems. 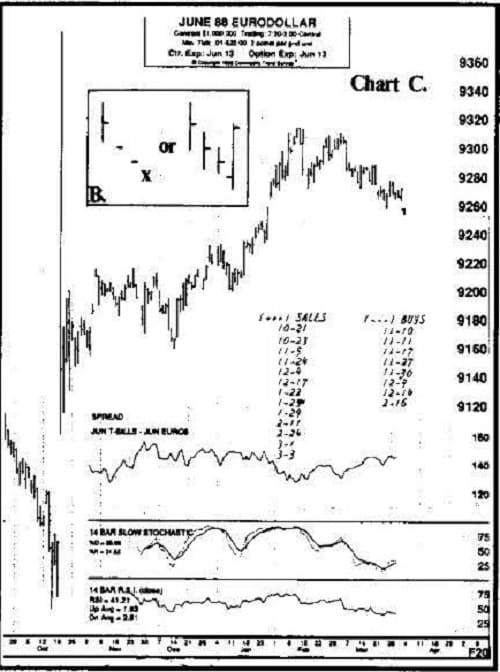 A Compaq 386 personal computer with a custom written program for system development was used to test the patterns. The program used is system-oriented, therefore, the patterns are displayed as “systems”. To determine a intraday bias, refer to the “% Proﬁtable” column on Table A. To estimate if the system is proﬁtable, refer to the “Total Proﬁt” column, also on Table A.

Table A shows, beginning with the left-hand column, the System (Pattern) Number, the Pattern, Entry, # of Trades, Percentage of Winning Trades, the Average Dollar Amount of all Winning Trades, the Average Dollar Amount of all Losing Trades, and the Total Proﬁt (Gross) before commission and slippage. In the Pattern column (+) symbolizes an up closing, (-) a down closing relative to the previous day. The exception is the sign on the far right which represents the open of that day and the point of entry for the trade.

Refer to System #5 on Table A and the ﬁrst pattern on Chart B. The pattern is two lower closes with a lower open. This is represented by three minus signs (—) on Table A in the Pattern column. Beginning from left and working right, the ﬁrst pattern on Chart B shows a daily bar with the closing price displayed. Immediately to the right of the daily bar is the closing that represents the next day’s close (lower) and is the ﬁrst minus sign in the (—) pattern. The next dash is also a lower close than the previous day and is the second minus sign in the (—) pattern. The last minus sign in the pattern (—) is the (X) on Chart B which represents the open. In summary, you have a lower close relative to the previous day followed by another lower close, followed by a lower open. In this case a long position was taken on the open of the third day and exited on the close of the third day. No stops were used in the tests. 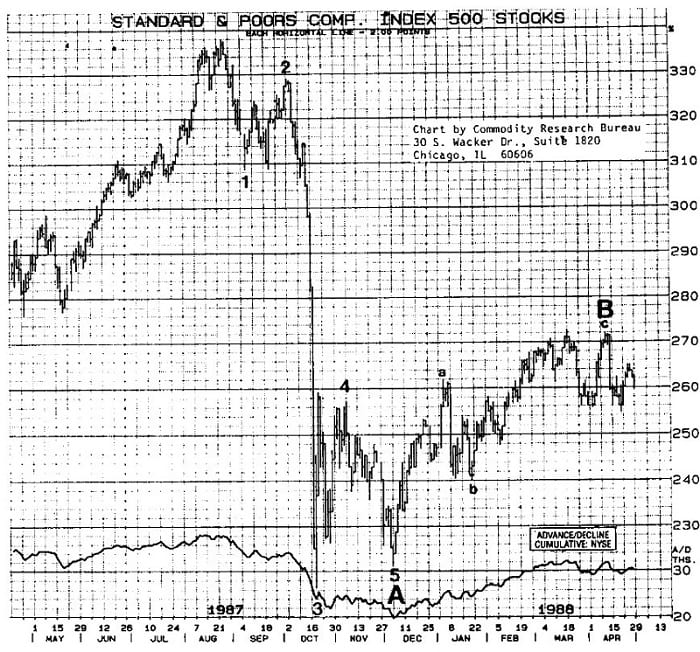 The dates of entry on all possible buys after two lower closings and a lower open (#5) and all sales after two higher closings and a higher open (#12) are listed on Chart C. On the chart itself each daily bar shows the open (entry) with a dash on the left of the bar. The dash on the right of the bar is the close (exit). I conclude that a bias does exist from open to close as evidenced by many of the patterns producing 60 percent or better results. Regarding the systems, gross proﬁts are high enough on some to warrant a system trade, however, that is not the best application. Better systems do exist and I recommend further research using the most proﬁtable patterns as the focus of the research. Note patterns 5,6, 12, 13, 21, 24, 25, 29, 30, 33, 36, 44, 45, 52, and 53 all of which will provide a good start in system development.

Some practical applications are to coordinate the patterns with support/resistance angles, and trend lines. For instance, an open on an important angle of support when a strong upward bias is indicated increases the validity of the support. Watch action around the open for conﬁrmation of the bias before entering a trade. Place stops to enter just above or below the open in the direction of the bias. This should be done early in the session to anticipate early (urgent) entry on the part of market participants. Early entry usually results in a big move for the day.

The patterns can also be used to enter when a trend has been deﬁned. For example, pattern #48; a buy after three up days, a lower day, and a lower open reﬂects a strong up market with a one day counter move. The lower open provides an excellent chance for low risk entry. The objective is new highs for the move. Note the high percentage proﬁt (63%). I have observed that most of the best proﬁts in this pattern come in strong uptrends. In trading ranges it is not as proﬁtable. I do not use these systems methodically in my trading but ﬁnd them a useful starting point in system development. Increased and narrowing daily ranges can be applied successfully to the basic close/open patterns to form some very reliable systems. In fact, daily range differences relative to the previous day, or days, may be one of the most important concepts in system testing.

Newer In “Sync” With Natural Laws of Cause and Effect By Jim Purucker
Back to list
Older Will History Repeat? By Donald R. Vodoptch