I started studying the works of the late W.D. Gann in 1973. The Dow Jones Industrials make their high in January of the year and were on their way to their ultimate low of 569 in December of 1974. the grains were in the bull phase os their cycle which would take the soybeans to almost $13.00 a bushel by June. What was the driving force behind these bull and bear cycles? After much detailed study Mass Psychology was the obvious answer. But what good was this knowledge without knowing ahead of time when they would occur? Evidently, Mr. Gann found the answer, as a study of his now famous yearly forecasts would attest. It would take me almost ten years of study, pouring over historical data and re-reading his writings hundreds of times before I would have the correct “mind set” to understand.

For those of you interested in making these types of forecasts. I suggest you study any literature on astro-cycles as herein lies the answer to acquiring the correct mind set. What is meant by the mind set? This is the term used to describe when your mind is ready to accept certain laws. Until this time your eyes will see the answer, but your mind will not believe what it sees. I don’t have enough space in this article to teach a complete course in astro-cycles, but there are some key angular relationships that should help you.

First, Mr. Gann teaches us to look for changes in trend every 90, 180, 270, 365 days for important highs and lows. This is because the sun moves roughly one (I) degree per day; thus, after 91 days or 13 weeks the usn is square or 90 degrees from the high or low you started your count from. A time to start watching for a change of trend either major or minor. We would use the same reasoning 183 days later when the sun was in opposition (180 degrees) from its place at the low or high and start looking for technical indications of a change in trend. Now, we can use these same key angles in our astro observations to help us ﬁnd termination points.

In this example I will use the cycle of the planet Jupiter. When the Dow made its low in August 1982 Jupiter’s position was 212 degrees longitude. In August of 1987 when The Dow made a top around 2700, Jupiter’s new position as 29 degrees longitude or 183 degrees to its starting point in August 1982. A point in time to start looking to our technicals for an indication of a change in trend. Are these astro-cycles merely “coincidental”, maybe? But who cares as long as they can help us become successful. If you did not have the correct mind set you would not have believed this cycle would be a valid one to observe. Don’t forget that “Nature does not cease to exist where we cease to perceive her.”

I have enclosed my 1987 annual forecast for The Dow Jones Industrials Averages and carried it out into the end of February 1988. Let’s start with January 1987. Note the Mass Pressure Chart indicated a move to March 11 and then a decline. Actual top on The Dow was April 7 (27 days) later. When the Dow made the low on may 19 the Pressure Chart was indicating May 18. From here the forecast was for slightly lower prices until June 18. As you can see, The Dow was showing considerable strength by moving higher while the Mass Pressure Chart was moving lower.

From here we get back in gear as the MPC was indicating upward pressure until August 13. The actual tip was made on August25 (12 days later). Now, it gets interesting; the MPC was showing a building up of negative pressure which would not subside until October 20 and although The Dow stayed in a tight range at high levels between August 25 and October 2 it had to play catch-up to balance out time on October 20. Also note I have drawn an angle (A) off the forecasted top of March 11 which coincided with the low of October20 on the MPC. I also drew and angle (B) from the actual top of April 7 which also caught the low of The Dow on October 20. Powerful stuff! 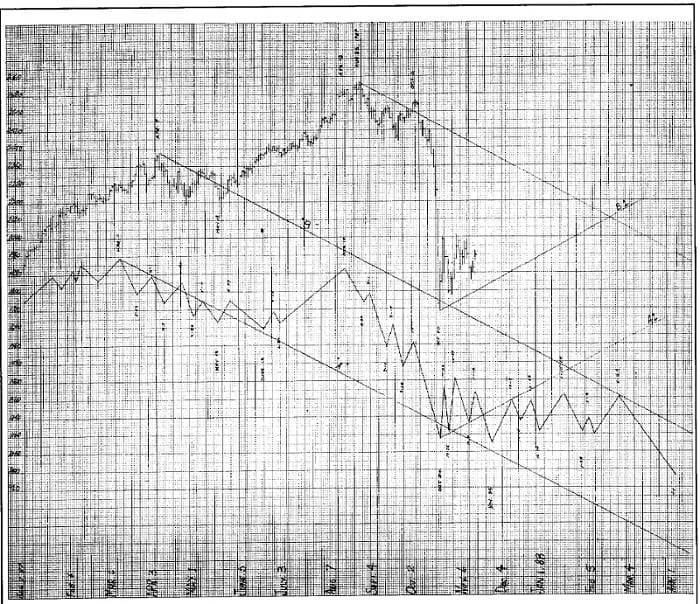 The ﬁrst two months of 1988 look sideways to somewhat lower. From here, the market should trend higher moving above and below Angle B until October to November 1988. Past performance in no way can assure future forecasts will be as accurate as these have been. These road maps of time should be considered just another tool in our quest for market proﬁts.

Newer Compuwave By Robert A. Saperstein and Thomas Gautschi
Back to list
Older Continulink Data By David Green