Acouple of years ago Gilbert Steele contacted me and was interested in writing several a rticles for Traders World. He explained his story of how 33 three years ago he was standing in church and challenged God to be real to him in a very special way. He then had what is called an out of body experience. He found himself in a tunnel traveling through time and space. In this tunnel travel he had received a revelation regarding the math required to predict the stock market.

I was somewhat skeptical of his story. I had seen several stories about people having out-of-body experiences, but I didn’t fully understand about how it could change a person or his knowledge. I have talked to Steele several times since that ﬁrst contact and found him to have an extraordinary ability to forecast the markets. I witnessed him call the turns for Texas Instruments (TXN) many times. He also is on record for calling the 1987 stock market crash to the day and the dollar, before I knew him. Steele has given us three large articles explaining his theory of how the markets work.

The articles explain some of the ideas behind Steele’s concepts of how the markets work. He believes that the main factor of the market is time and that our side of the universe is polarized by two; A male force and a female force. Time is subject to the laws of Fibonacci 1, 2, 3, 5, 8…etc. and DNA 1, 2, 4, 8…etc. Gilbert says that even the chromosomes of our bodies are based on the numbers of 1, 2, 4, and 8. These numbers gives us the math code of when a major move will occur. He explains that it’s something like a Two Line Cross Over Moving Average. 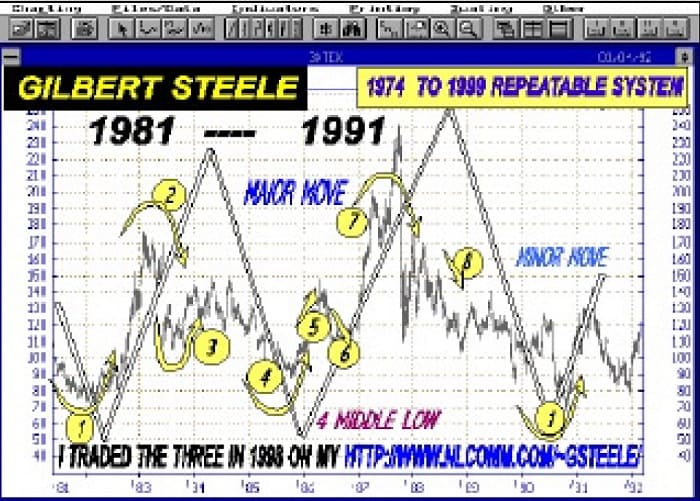 One line of the moving average is the male force and the other line is the female force. The third is time or the trigger that causes the market to turn. Gilbert uses the software program WinWaves 32 which we will review in the next issue. You can see in his Time and Dimension Chart that he uses a different wave count than most Elliott Wave students. He goes through 8 counts and then starts over following an unusual wave structure. Study this chart carefully. It may illustrate the secrets behind the markets. Then go to his articles on our website. They are a must read for any serious student of the market.

Gilbert has also produced an excellent video tape which explains a lot of his theory.

Newer Natural Law is the Basis of Market Movements By David S. Cerf
Back to list
Older Biblical Stock Trading By Joseph Arechiga