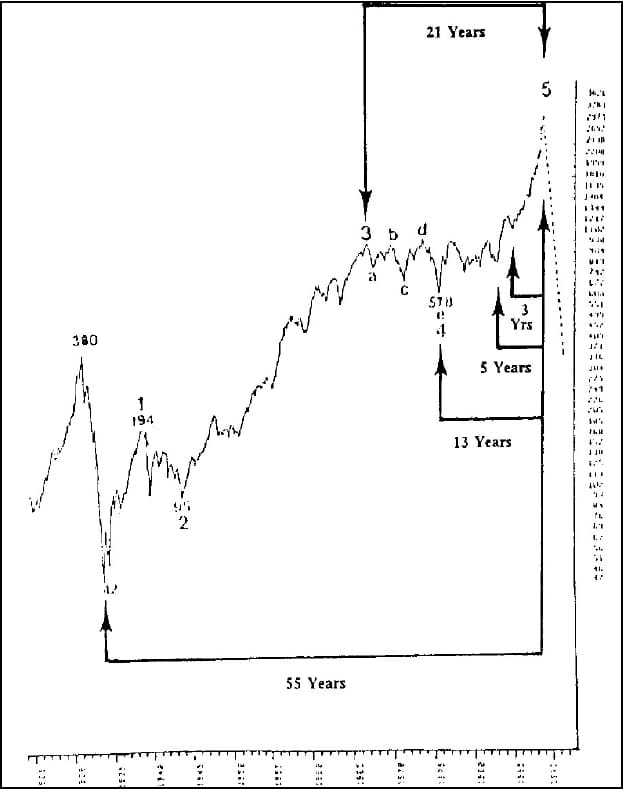 A peaking in 1987 would ﬁt nicely with the Kondratieff Wave and would imply that the forth coming period will be one of severe economic slowdown. In fact, this theory is so bearish that thue believers should consider have about 6-12 months future expenses of readily available cash on hand. Supporting this outlook in the late 1987 were the slowest M2 money supply growth that HIS country had experienced in 17 years, the out-of-control twin towers (and we don’t mean the two Houston Rockers basketball players or the New York skyscrapers, either, but the budget and the trade deﬁcits), the recent downturn in only the leading economic indicators, but also the Columbia University index of leading economic indicators (which tends to lead even the leading economic indicators and turned down spring, 1987), third world indebtedness, banking insolvencies, etc. In fairness, however, we do point out that the above is not the only scenario. Other viewpoints are discussed in other sections of the Almanac.

See also  Fine-Tuning Your Risks By Dirk Vandycke
Newer How to Use the Ratio Compass Divider By Larry Jacobs
Back to list
Older The Gaining Of Wisdom By David E. Bowden