In this article, I attempted to clarify the application of Elliott Wave in the stock market and offer a well substantiated argument for a higher Dow into late August/early September (the date for a high has been narrowed down to August 31 or September I, 1989). Much from that article was omitted and therefore left the reader with some very understandable questions which I will attempt to dispel in this subsequent article.

More than ﬁve months have elapsed since its writing and time, as always. has been the true test for this speculation. The yearly and monthly wave counts remain intact and are presently being reinforced by the weekly and daily action of the industrials.

I would like to venture further in this analysis and take a close look at the weekly wave formations, introducing some corroborating Gann analysis which supports the preceding hypothesis. and zero in on the precise target for the ﬁfth and ﬁnal wave high.

Using Figure I, a weekly DJIA chart, as the visual aid. I would like to examine the current wave structure and some unique correlations between the waves and their respective highs and lows (I have labeled the waves and provided the most obvious target based on inter-wave correlations). If you have any questions regarding the rules or ratios used, please refer to Achieving’ the Ultimate High: Part 1 ).

Since the Primary third-wave high of August 1987, a consistent 15-week, or 104-105 day, cycle has manifest itself throughout this entire rally. predominantly between the highs, becoming more precise as the wave unfolds and nears its ultimate destination (note: unless otherwise speciﬁed. ‘days will represent actual calendar days thereby using the same methodology as was on the anniversary of the crash) and 60 weeks from the one-wave high of 2158. It would also occur 91 weeks from the December 1987 low of 1768, thought by many to be the orthodox low of the fourth-wave (for the record, I disagree, but it still remains an important low regardless of its nomenclature). 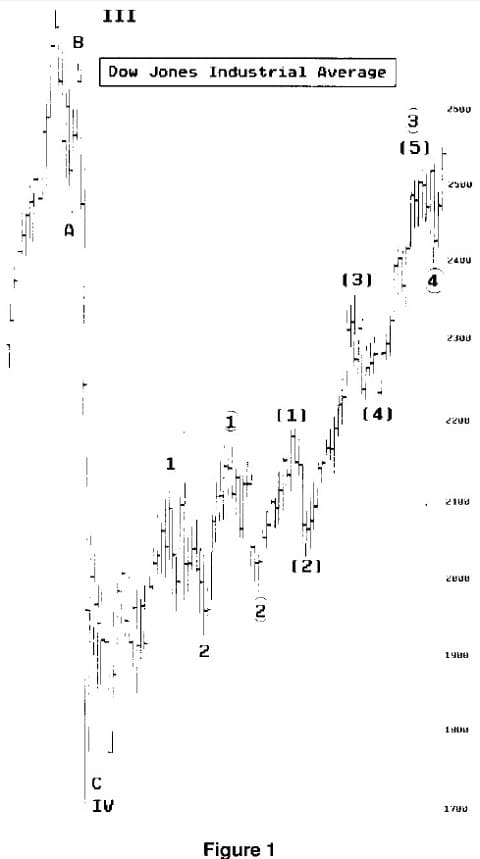 With this, many cycles coinciding in the same time frame, it becomes difﬁcult to ignore the signiﬁcance of this alignment or to dismiss it as simply chance. Reinforcing the importance of this cyclic phenomenon are the unique properties which the number 15 and its two counterparts, nine and 24, hold from both an Elliott and Gann perspective.

From a Gann standpoint, these numbers are very important particularly when considered in conjunction with a circle, or more speciﬁcally, a Gann shell. The smallest division which appears in a Gann wheel or in any circle or planetary cycle used for analysis is a 15-degree or 1/24 division. Considered with the fact that the number nine has stood as the foundation of much of W.D. Gann’s work, the correlation of these three numbers begins to take on some importance.

It is not, however, until Fibonacci and Elliott rules are applied that the full impact of this series can be realized. The number 15 multiplied by .618 is nine. Fifteen multiplied by 1.618 is 24. These numbers are part of an interesting summation series, much like the more renowned Fibonacci Summation Series (0,1,1,2,3.5,8,13,21,34,55,89…) which would begin with zero and three rather than zero and one. The series would then progress from there (…0,3.3,6,9,l5,24,39,63,102…) with the ratios between each subsequent number being .618 and 1.618 like the original series (notice that the seventh number in the series is 24 and the ninth number in the series is 63, another crucial number Gann). The conclusion to be reached from this unique alignment is that the next signiﬁcant high. and I believe the culminant one, should occur during the week of August 28 – September 1. 1989.

Observed by itself, this 15-week cycle differs little from any other cycle which appears in the market for a brief period of time only to be superceded by a greater or more powerful cycle when the time is right. However, when considered with the assumption that a high in 1989 would complete a 15-year ﬁfth-wave (see A.T.U.H.) a 60-year cycle from the Super Cycle wave three peak in 1929 and if occurring on August 31, 1989 would occur 105 weeks from the August 24. 1987 high, it begins to gain new signiﬁcance. A high on August 31 would occur 30 weeks from the (3) wave high of 2347, 45 weeks from the (I) wave high of 2183 (which coincidentally in Gann analysis, the product of nine and seven).

You may remember that much of the current wave structure in the stock market contains these numbers in time and price. The third wave of this Super Cycle Fifth wave lasted 24 years, from 1942 – 1966 and a high in late 1989 would occur just a half year shy of 24 years from the February 1966. A high in August 1989 would occur exactly 24 months from the previous high of 2722, thus reinforcing the probability of this projected peak. I had also discussed that the cycle fourth-wave low of 578 is really the cornerstone of the entire wave structure, past and present. You may notice that 578 is just two more than 576, the square of 24 (see ﬁgure II for further explanation).

The 9-15-24 correlation is just one of many which exist in the markets and are perpetuated throughout present and future wave structures. For the sake of brevity I will leave this discussion for future articles. As of July 1 (the writing of this article) the ﬁfth-waves of intermediate and minor degrees are the only remaining waves to unfold and, if on target, should peak on August 31, setting a high close in the 2814-2822 range and a entire analysis of this scenario which should be available at the time of publication.