Since October 1987, numerous theories have been offered to explain the action of the stock market and subsequently predict its future course. Conﬂicting projections ranging from as low as 400 to as high as 6000+ Dow, serve to confuse the public and often alienate them from stock market investing. The resultant quandary can be alleviated by ﬁrst categorizing and then validating each theory according to the rules on which it is based. Ironically, the rules claimed as the foundation for each are identical and are clearly presented in a single text, The Elliott Wave Principle.

Reinforcing these rules with the use of common sense, I intend to dispel the notion that the Elliott Wave theory is highly esoteric realm of technical analysis and to encourage even the most basic technician to explore its potential. Common sense should be employed immediately upon viewing the stock market. The market has recently (1982 1987) experienced one of its most dynamic rallies culminating an even broader advance which lasted more than ﬁve decades. It now necessitates a period of consolidation, comparable to the two within this advance, before another substantial move in either direction can be sustained (markets tend to trend only 15-20 percent of the time). The next step is to subject these hypotheses to the scrutiny of Elliott and assess whether or not they conform to his standards. The initial assumption is that the bull market peaked in 1987 and is in the early stages of a major bear market which should continue well into the twenty-ﬁrst century.

According to this scenario, the market is now in the second wave of a new Super Cycle wave and it is necessary to determine where this wave is most likely to terminate and the ensuing wave three commence. Regarding two waves Elliott observed that, “Second waves often retrace so much of wave one that most of the proﬁts gained up to that time are eroded away by the time it ends.” Therefore, a test of the 1987 highs is very possible without eradicating the bear market scenario.

Taking this scenario one step further by looking one step behind, an interesting revelation occurs. The alleged fifth waves of Primary and Intermediate degree are each extended, a rather uncommon occurrence in fifth waves. According to The Elliott Wave Principle “Fifth wave extensions are retraced twice,” and are “never the end of a movement.” To clarify, the authors observe, “…that when an extension occurs in the fifth up-wave, an irregular top will carry the market into new high ground, thereby extending the ‘movement’ beyond the orthodox top of the fifth wave.” So a return to the highs becomes the most probable conclusion, bear market or not. 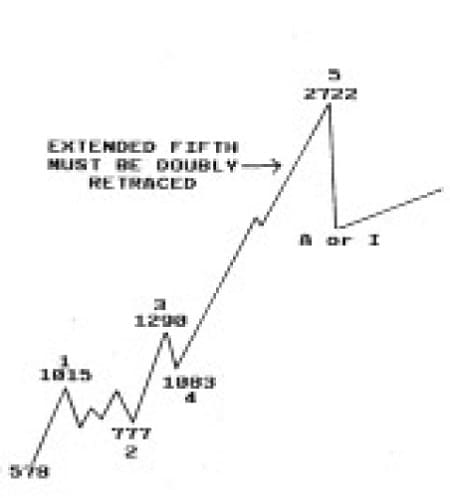 The second scenario contends that the up-trend remains intact and new highs, or extraordinary proportion, are yet to materialize. The underlying assumption is that the ﬁfth wave will exceed the advance of the ﬁrst wave (373 percent) and therefore, by the rule of wave equality, correspond to the advance of the extended third wave (970 percent). The Elliott Wave Principle states that, “…the majority of waves contain extensions in one and only of their three impulse waves…(which) occur most often within third waves.”5 Furthermore, “…ﬁfth waves are usually less dynamic than popular conception holds.”6 Consequently, it seems highly improbable that we will experience this euphoria in the market.

I would like to offer another alternative which has, until now, gone undetected. My inference, based on all available information, is that the market will rally into early September, 1989, and barely exceed the 1987 highs, fulﬁlling all necessary wave counts and terminating near 2750-2775 DJIA. Knowledge of the proceeding waves is necessary for ratio analysis and is provided in Figure 1. Assuming that Cycle wave ﬁve is related to the proceeding impulse waves (ﬁve and 24 years) the most probable expectation is a 15 year rally (15 = 5 x 3, and 24 x .618). More precisely, an advance of 176 months is likely (285 months x .618 = 176) and would project a high in august 1989 (the anniversary of 1987 highs). This wave, if equal to wave one and related by .382 to wave three, would peak near 2735. 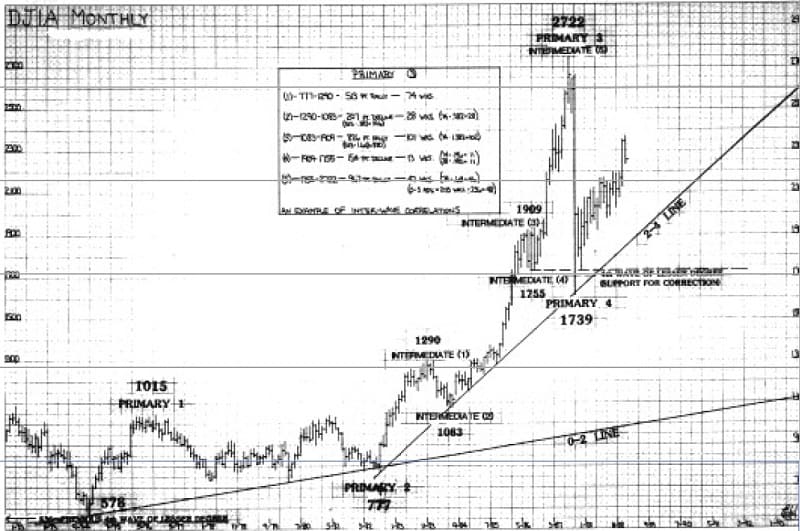 If Primary wave ﬁve were to correlate in like manner to Primary wave one, a high of 3060 would be expected. However, if wave ﬁve were related to wave three, by the most pertinent ratios, a high in September 1989 (60 months x .382 = 23 months), near the 2765 level (250% advance x .236 = 59 percent advance) is more likely. Applying another of Elliott’s rules, “Wave ﬁve is related by the Fibonacci ratio to the net advance from the beginning of wave one to the top of wave three,” conﬁrms this theory. The net advance of the ﬁrst three waves is 371 percent and lasted 152 months. Multiplying each by .146(.6184), a ﬁfth wave, advancing 54 percent and lasting 22 months, would peak near 2710 in August 1989. There is also a very convincing argument from Gann, reinforcing this hypothesis, two areas of which I would like to mention. Gann placed much emphasis on the number nine and the use of anniversary dates, from year to year, in his analysis. Expanding the latter to decades and centuries, and combining with the former, reveals some interesting “coincidences.”

In addition, consider what might occur on the ninth day of the ninth month of the year nine in the ninth decade of 1900 (9/9/1989)! What might the 1990’s hold? Judge for yourselves and see if you agree that any way you look at it, a high in September 1989 is a very real and startling possibility for the current Super Cycle wave structure.

Newer The Jupiter Effect on the Stock Market By Bill Meridian
Back to list
Older Silver Astrology and the Golden Mean Ratio By James W. Brock

One thought on “Achieving the Ultimate High By Eric S. Hadik”