Fractal of Pi contains the details of a fascinating original discovery about the nature of markets. This discovery did not come about by chance. I was looking for it. When the universe was ready, it let me see it.

Fractal of Pi is a course about a mystery-not an unsolved mystery, but a mystery solved. The mystery I speak of is the mystery of when markets will make those breathtaking chaotic streaks. Streaks are those fast moves that seem to come out of nowhere and move markets large distances in a matter of hours. Figure 1 shows such a streak. 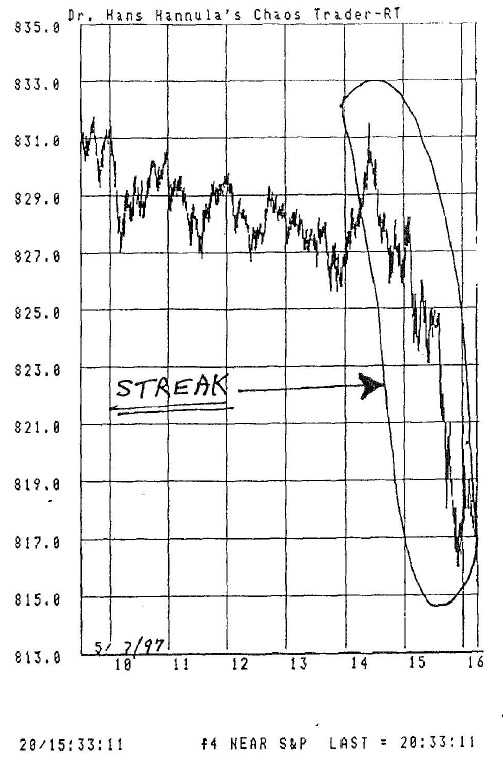 This is a chart of the S&P 500 futures contract on May 7, 1997. For the first four hours of trading the market was relatively flat, trading between 827 and 831. In the fifth hour it made a fast move up, retested the highs, and then dropped like a rock, falling from 832 to 816 in 1 1/2 hours. Obviously, this is the type of move that a trader would love to catch.

My work has focused on the search for the patterns of chaos. Markets are chaotic non-linear systems. As such, they product fractal patterns in their output, which is a chart of price versus time. The most basic of these patterns is the Chaos Clamshell. A more highly developed form of the Chaos Clamshell is the Hannula Market Fractal. It is taught in the Cash in on Chaos course, which is a prerequisite for this Fractal of Pi course. You should be familiar with both of those patterns.

This course develops that pattern further into the Fractal of Pi. Let us return now to the subject of streaks. There are several questions about streaks. When do they occur? Is there a pattern to them? “How can I cash in on these streaks?” ‘We will develop the answers to these questions in the next few chapters. We will examine the energy fields that drive markets and the geometry of the patterns in these fields. That will lead us to the development of the Fractal of Pi pattern. Then we will cover its application in markets through multiple examples. By the time you finish this material, you will have a new powerful tool to help you find these “chaos cracks” and to help you Cash In On Chaos.