I thought it would be interesting to take a look at Gann’s actual price chart for May Soybeans 1948-1949 and see what techniques we could see him using on the chart. Top left is the astrological symbol for the planet Jupiter just at the beginning of a Jupiter trend line (1) He started this trend line on the 4th of October 1948 when Jupiter was at 22 degrees Sagittarius. 22 degrees Sagittarius is also 262 degrees of the 360 degree circle. Gann’s ﬁrst price marking was at 262 cents and then he started moving his trend line up by 1 cent every time Jupiter moved by 1 degree. I notice that he also noted the fractions of the degree as well.

The next interesting chart marking (2) is a line drawn along at 270 cents marking the price/degree where Jupiter would change signs from Sagittarius to Capricorn. A planet changing signs of the zodiac is known as ingress and this chart shows several planets ingress but he only marked Jupiter’s in this way. (3) Uranus and then Venus and Mars ingress within one day of each other. He put a little cross on the day of the Mar’s crossing. 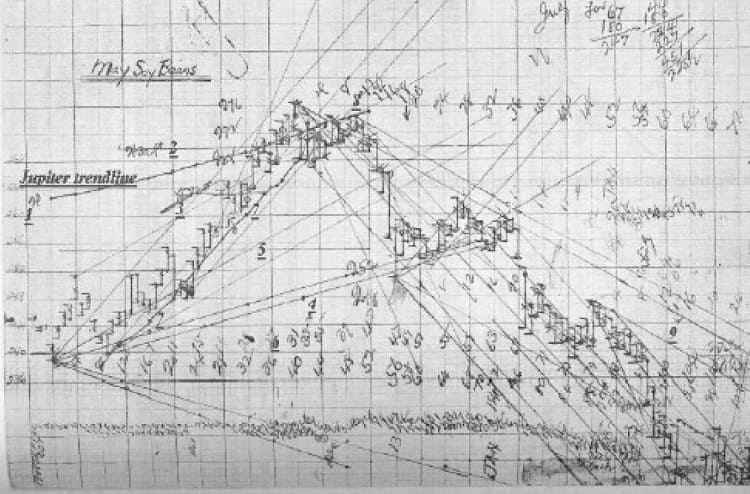 (4) Each zodiac sign is 30 degrees of the circle. (360 degrees divided by 12 signs = 30 degrees) Gann marked 270 price for Jupiter’s ingress and then marked 15 cents below this (5) as well 30 cents lower (6) all potential price targets. Another interesting trend line is created by the movement of the planet Mars (7) Mars moves faster than Jupiter and this is reﬂected in the steeper slope of the Mars trend line. The high on May beans was 276 cents. Notice that on the day when the Mars trend line would be at 276 (8) prices began breaking out of their range. There are a few light markings that are probably impossible to see in a reprint like this but one of them (9) is a little arrow pointing down when the moons nodes changed to 29 degrees of a new sign. This is like a planetary ingress because the moon’s nodes run counter-clockwise. It is always fascinating to study this chart and there are other things buried in there as well that I will discuss at a future time. Another thing that I have found fruitful to study is the dates for which he forecast market turns and how they relate to planetary phenomena.