During the course of the last several years many articles have appeared in Trader’s World that cover the mysterious topic of “astrology.” Those interested in the subject matter quickly ﬁnd out that astrology is really nothing more than the “ancient study of cycles.” The lunar cycle of new moon to full moon is a 28 day cycle. Mars changing signs is a 45 day astroharmonic cycle. The 41 month stock cycle is the Jupiter-Uranus cycle.

A ﬁnancial astrologer is, in fact, an historian of cyclical behavior. It amazes me that so few “true” students of the market have picked up on this approach to market behavior. I quit trying to ﬁnd out the reasons “why” these astroharmonic cycles cause abrupt changes in market trends. I am too pragmatic and prefer to proﬁt from the events, rather than know the actual reasons why. My guess is that it probably has something to do with the electro-magnetic vibrations of the gravitational forces of the planets as they pass through their orbits.

The planet Mercury is the fastest moving planet in our solar system and the ancient Babylonians (around 6000 B.C.) associated the planet with speed and communication. George Bayer, a prominent ﬁnancial astrologer and speculator in the late 1930-1940’s, wrote several books on Mercury’s inﬂuence on the Wheat and other markets. My second book, Planetary Harmonics in Speculative Markets, reported on some of Bayer’s theories and how they worked, not only in wheat but in ﬁnancial markets such as the foreign currencies, Treasury Bonds, Standard and Poors index and gold. 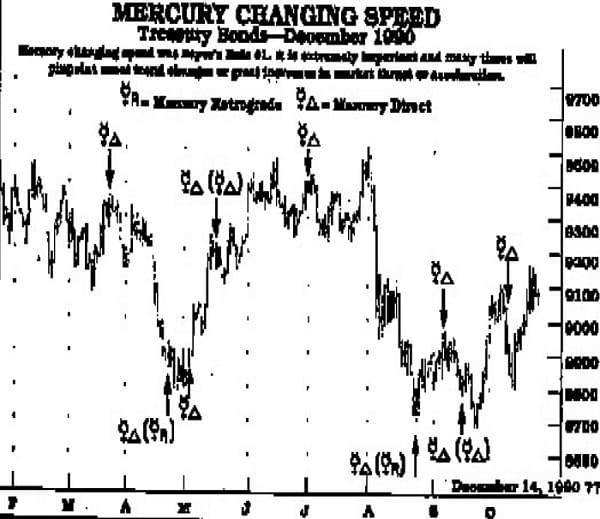 I have always believed that the only two things that move the markets are the emotions of Fear and Greed. Could it be that because our bodies are approximately 80% water that we are act to the gravitational pull of the planets, much like the moon affects the tides?

George Bayer’s book, Secret to Forecasting Prices on the Stock and Commodity Traders Handbook of Trend Determinants was my starting point. My good friend Neil Michelson at Astro Computing Services in San Diego offered his enormous data base and computer facilities to test some of Bayer’s ideas on the ﬁnancial instruments introduced in the ’70s. My theory was that if it worked in the ’30s and ’40s it should work all the time. George Bayer’s Rule #1 was based on the speed of the planet Mercury (the fastest planet in our solar system). As Mercury passes through its elliptical orbit around the sun it changes speed at various times. It also experiences “retrograde motion” when observing this phenomenon using acentric (earthcentered) astrology.

This astroharmonic event has two applications for the astute trader. First, it will usually cause a quick change in trend, or second, it will cause a rapid acceleration in prices (thrust). Being cognizant of these important times gives the speculator a decided edge to expect the “unexpected.” In Planetary Harmonics of Speculative Markets the exact times of these dates when Mercury changes speed are given to the year 1996. December 1990 Treasury Bonds is a representative example of the effect of Mercury changing speeds. However, one should take into account other of Bayer’s astroharmonic events, especially if they occur at the same time Mercury changes speed.