Up until now, there have been three major methods of maintaining data and generating charts based on the data. They are as follows and probably account for 98% of data bases in use: One popular method is CSI Perpetual data. This method uses both a nearby contract and the next out contract. The two contracts prices are then averaged and time weighted. Use of Perpetual synthetic data could result in your trading system giving false signals this is due to the price conﬁguration being distorted due to the strong effect of the back contract.

The back contract may display a much different signature and price pattern that the nearby contract your are trading. This can be due to seasonal factors. fundamentals, or thin volume compared to the nearby. In addition, the positive or negative contract premiums can cause major problems as it can distort the actual trend indicated by the nearby contract your are trading. This effect caused by increasing/decreasing spread premium can cause a pronounced change over time to the overall trend appearance. Another often used method is nearly continuation data. Charts based on continuation data will result in price discontinuity and frequently large gaps, at contract rollover time. The gaps can have a dramatic effect on trading system indicators and also greatly alter chart perspective for “chart traders”.

An additional well promoted method is Gann style data. Gann concept follows a speciﬁc contract for its life right from the start of trading. This is the opposite of continuation data that is constantly tracking new contracts. The major disadvantage to this method is that it can only be used with the W. D. Gann method of trading using Gann angles and time and price squaring. It doesn’t work well with moving averages and various types of computer oscillators.

See also  Astronomical Division of The Heavens By George Bayer

None of the three popular methods above, due to the various reasons outlined, can be relied upon for computer trading systems. None of the methods are truly valid for systems that rely heavily on price patterns, open-high-low-close relationships or chart trend perspective. All three methods are also of questionable or little value for long term back testing or development of a trading system. 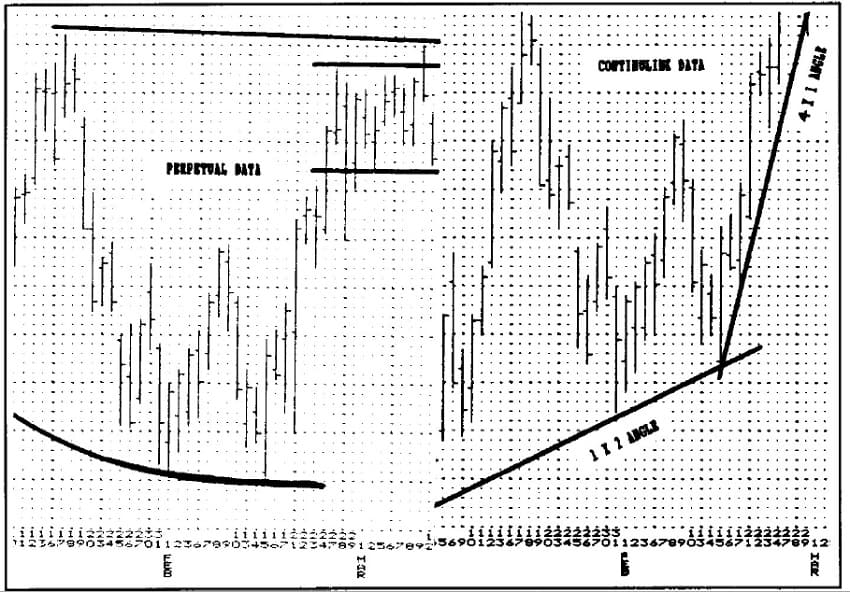 A fourth method is proposed that will hopefully become widely used for computer trading systems in place of the three currently popular methods. Continulink data and charts generated from the data will solve all the problems alluded to and is by far the best method for computer trading systems. With this method you will only follow and maintain data on the active nearby contact being traded. The Continulink concept is based on mathematically linking the contract months on a pre-speciﬁed rollover date schedule. This is accomplished by back-adjusting all the historical data so that it corresponds to the new contract being followed and traded. To exemplify, the spread premium differential between the expiring and new contract is either added to or subtracted from all the historical data at rollover time. Once rollover takes place the date is maintained with the actual nearby prices being entered each day until the next switch over date occurs. There is an easy-to-use computer program to perform the rollover, back adjustment and management of historical data from the Trend Index Company.